Word has come through tonight from the MotoGP paddock at the Red Bull Ring in Spielberg, Austria that Moto3 Sky Racing Team VR46 rider Romano Fenati will not be competing in the tenth round of the Moto3 season.

The Sky VR46 Racing Team confirmed on their website that the Italian rider will not be permitted to race; a sanction administered by the team themselves.

Their press release stated, “Following repeated behaviour not in line with the disciplinary rules of a Team – the rider Romano Fenati has been suspended. He will not be on the starting grid of the Austrian Grand Prix.”

Has the team given up championship hopes on the Italian?

Fenati is the team’s best contenders for the Moto3 title as he currently sits in third in the championship. A sanction like this, which jeopardises their own results at the end of the season, proves that such drastic measures must have been needed; the team must be sceptical that he has a chance of winning the title.

Fenati qualified eleventh on day two of the meeting ahead of the NeroGiardini Motorrad Grand Prix von Osterreich. He will remain on 93 points at the end of the round and Francesco Bagnaia (Pull & Bear Aspar Mahindra team) has a chance of closing the gap between him and the naughty Italian. 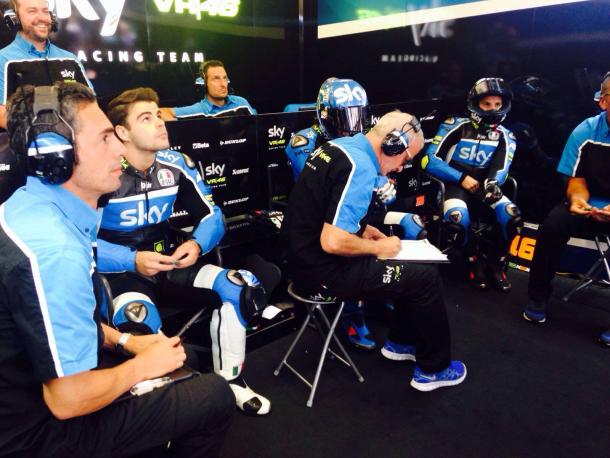 Is Fenati’s future in jeopardy?

Not only has his behaviour jeopardised his chances in the race and the championship, it has more than likely badly tinted his career with the Sky Racing Team VR46. The veteran VR46 Academy rider was meant to progressing through to the Moto2 next season.

The Sky Racing VR46 Team who are looking to compete in the Moto2 championship; following in the footsteps of the 2015 Moto3 championship winning Leopard Racing Team.  Now this announcement has thrown his career into doubt? Will the team want to take the risk with a rider who they themselves have had to punish?

Already this year we have witnessed Fenati behaving abruptly towards his rookie teammate Nicolo Bulega. Returning to the pits after a session out on track Fenati refused to shake Bulega’s hand or communicate with him; and it was all caught on camera for the MotoGP world to see.

This incident occured when his rookie teammate gained a better result than him, and Fenati appeared to act immaturely as if jealous of his teammate's achievement. The sanction comes again on a day where Bulega, the rookie, qualified four places in front of the 'veteran'.

As seen on the team's most recent post on social media platform Facebook, Fenati was not present after qualifying today at a hospitality event with lucky Sky customers; amaybe this has something to do with it? Did he refuse to attend or was he being disciplined at the time?

What should he do now?

The best thing the 20 year old can do is apologise, stop repeating the behaviour towards his team and focus on his career before it ends too soon.

The team will have to rely on Bulega, starting from seventh, and Andrea Migno, starting from twenty-first after he needed work doing on his bike during qualifying, to bring home the points this round!

FP3: Mercedes head into Qualifying fastest in Austria17 hours ago

Austrian Grand Prix 2020 Preview: Can Mercedes pick up where they left off?a day ago

Deja Vu? Hamilton tops the leaderboard in FP2a day ago

Could F1 return to famous Imola track where Senna was killed?18 days ago

Austrailian Grand Prix 2020 cancellation: A timeline of the chaos4 months ago

Bottas fastest as Barcelona testing draws to a close4 months ago

Vettel fastest on penultimate day of testing4 months ago