While everyone praises British rider Cal Crutchlow on winning his first ever MotoGP and becoming the first Brit to win a MotoGP in 35 years, and several other well deserved accolades he earned in Brno, there was a certain Irishman who also did an amazing job in the wet.

When the MotoGP field arrived at the Automotodrom Brno in the Czech Republic for the 11th round of the MotoGP, they took to the track on day one of the meeting for Free Practice one, at the end of the session Pull & Bear Aspar Team rider Eugene Laverty ended the session at the bottom of the timesheet.

The Irishman improved slightly during FP2 ending the first day in 16th. He remained in 16th for FP3 meaning he would have to try and finish in the top two during Qualifying 1 if he wants to start from the front four rows of the grid. Having dropped to 17th in FP4, and only managing to finish fifth in Q1 meant that Laverty was going to start the race from 15th on the grid. 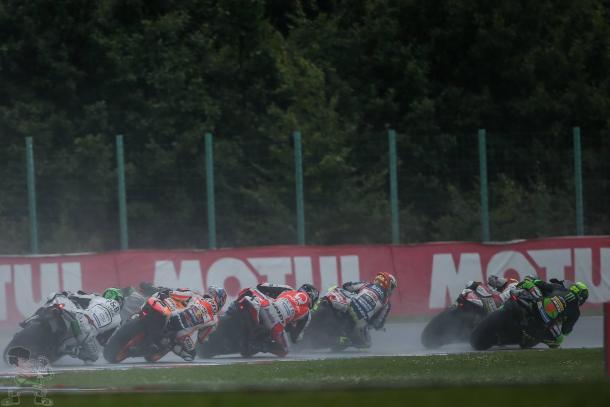 Laverty was knocked out of the Austrian GP

Now as a result of the incident at the end of the Austrian GP where Octo Pramac Yakhnich Ducati rider Danilo Petrucci crashed into Laverty and knocked him out of the race on the last corner, the Italian received a penalty point and lost a row on the grid which meant that Laverty was one of the riders from moving up on the grid by a place.

Laverty one of the quickest in the wet morning warm-up

It rained on race day though and during the morning warm-up, Laverty who was now set to start from 14th on the grid was fifth fastest; was this a sign of things to come?

The track stayed wet for the raced despite the rain holding off since before the end of the Moto2 race. After a poor start Laverty managed to battle way towards the front of the field.

Other riders struggled with severe tyre degradation which meant that remaining consistent and conserving his tyres brought him up to sixth. If only there were a few more laps on the race, Laverty would have possibly been fourth, he missed out on a podium by five seconds.

Fifth in Brno for Laverty

It was still a fantastic result from the Irishman who finished as the third fastest Ducati behind the Avintia Ducati boys Loriz Baz and Hector Barbera. He claimed 10 championship points which meant he is now 11th in the championship on 63 points.

Laverty found that out of the whole of the race “the start was the most difficult”. He had opted for the hard wet rear tyre which he why he was left “a little disappointed” with himself; at the start of the race he braked at turn 3 in the same way he did in the warm-up and he said, “Because of the hard rear the bike bumped up”.

This led to him losing “four or five positions” and then he found it “so hard to gain places”. He then found that he “could only really overtake when they started to go backwards”. Laverty was left feeling “angry” with himself “because of the start” as he felt the “bike was good enough for the podium today”; trying to remain optimistic he said “We will save that for next time”.

Laverty said that he, “used the hard rear tyre and the guys around me had the soft tyre”. As a result he noticed that “every time“ he was “with them in the corner” that the “rear grip meant they disappeared” towards the start of the race. 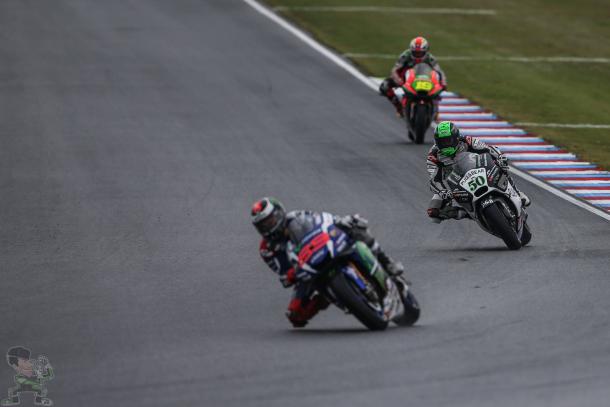 Every time he “tried to come back” and unfortunately for Laverty he felt that “every time it happened they held me up” as he found that he “couldn’t overtake them” as he was “lapping slower” than he wanted to.

Finally Laverty was able to enjoy the race

However, towards the end of the race Laverty “enjoyed the final laps”. He knew it was “so important to be smooth with the gas” due to the lack of grip but then he “started to really push on the last three laps” as he “could see Marquez there”.

Overall Laverty felt that it “wasn’t about how many laps” that remained but “more the mistake” that he made which he felt “cost us the podium today”. He feels that “when it’s really wet” that they can “be really strong”, this was proven by the warm-up when he was “fastest until one minute was left”.

In the future Laverty said, “I want some more rain so I can go after the podium”. It was still a fantastic result from the Irishman, and a great comeback considering the outcome for him after the Austrian GP. 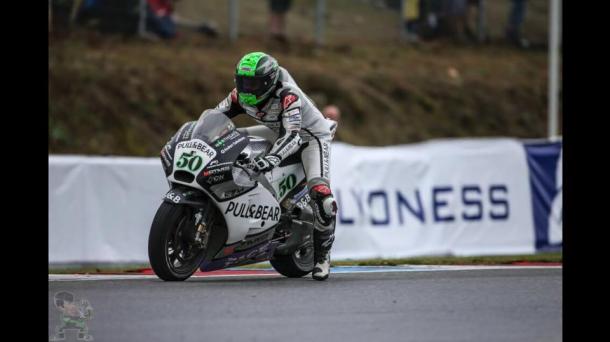 Hernandez finishes in best result of the season so far

Collecting his best result so far this season, and after a slow start as he had to alter his engine mapping after he lost power, Laverty’s teammate Yonny Hernandez finished in 11th. By lap nine he was in 12th and gained another place on the last lap when overtook Repsol Honda rider Dani Pedrosa.

Hernandez felt that the “positive thing about today” was that they “finished the race” and that they “picked up almost twice the amount of points” that they had “in the overall standings”. He said his result in Brno was “the best result of the season”.

The Columbian said that he would be leaving the Czech Republic with “a bittersweet feeling” as he said they “started the race with an engine map that gave (us) little power”. He said that “on the first few laps” that they “lost the group Laverty was in”.

When he “saw that they were breaking away” he managed to switch “to the mapping with much more power” and there he found the “times dropped almost by themselves”. He found then that he “gradually gathered pace” and then found he was “able to manage the race when other riders lost tyre performance”.

Hernandez said, “In short we added five points to our total and I hope that at Silverstone we can maintain this trend.” Hernandez remains at the bottom of the championship table now on eight points after taking five from the race.

Verstappen fastest in final practice session of 2020 3 months ago

Sakhir GP Preview - Can Bottas capitalise against Russell? 3 months ago