Remembering their fallen rider, the late Luis Salom, who lost his life following an incident during Moto2 Free Practice 2, the Moto2 class returned to a modified Circuit de Barcelona ahead of the Gran Premi Monster Energy de Catalunya to get things underway.

It was concluded that a rider by Luis himself, as he did not brake in time before hitting the wall, was what led to his unfortunate fate. Despite everyone’s best efforts track side, he lost his life, but in his honour things continued and many tributes were made, and continue to be made to the young Spaniard in and around the circuit and the paddock.

Changes to the Circuit de Barcelona

Immediately after the incident, changes were made to the track layout. The Safety Commission meeting that followed resulted in them resorting to the Formula 1 track layout instead for the remainder of the weekend. Since, further modifications have been made to make it safer by providing more of a run off area, and corners have been adapted to essentially slow the riders down.

First opportunity for all riders to familiarise themselves in Catalunya

The first session, like it was for all classes, was a chance for riders to familiarise themselves with the new layout. The new track meant that all previous records were now irrelevant and all slates were completely wiped clean.

Within the first ten minutes of the opening session getting underway for the 600cc class, Luca Marini (Forward Racing) was caught out at turn two where he had a highside. Accelerating too soon before he exited the left hand turn, he was thrown over the bike that continued to catapult sideways into the gravel. He was able to get up to his feet immediately, his inflatable leathers proving to be worth their weight in gold.

Further incidents during the first session

Miguel Oliveira (Red Bull KTM Ajo) was caught out when he carried straight on after missing the chicane and as a result he had a lap cancelled. He used the old track now converted into run off area to stay on and avoid an accident and returned to track quickly, narrowly avoiding other riders.

Alex Marquez (Estrella Galicia 0,0 Marc VDS) was also caught out at turn four when he missed the apex and carried on into the gravel. Fortunately he managed to avoid crashing and was back in control before the path that was beside the crash barrier.

His teammate and championship leader, Franco Morbidelli (Estrella Galicia 0,0 Marc VDS) dominated the timesheets for most of the session as his lap in the mid 1:50 minute area was untouchable for many for a good while. He was soon matched and beaten by Takaaki Nakagami (Idemitsu Honda Team Asia) who was taken out of action on the first lap of the previous round in Mugello. With less than 10 minutes to go, Oliveira found himself on top of the timesheets his time of 1:50.165 becoming the one to beat.

Oliveira quickest at the end of FP1

Despite trying, no one was able to improve on the Portuguese rider’s time and so he essentially not only was quickest but held the new Moto2 lap record in Catalunya. Nakagami remained second and Morbidelli third as no further improvements were made by the top three. Thomas Luthi (CarXpert Interwetten) was fourth ahead of Marquez and rookie Jorge Navarro (Federal Oil Gresini Moto2).

The ground temperature had increased significantly in time for the second Free Practice session for the Moto2 class. Immediately they matched their previous pace and improvements meant movement throughout the timesheets, even at the top.

Less than 10 minutes into the session, Marcel Schrotter (Dynavolt Intact GP) came off at turn 10 of the track. Moment later Axel Pons (RW Racing GP) came off at the first turn of the circuit when the front end folded on him. He slid into the gravel after his bike, but was quickly up to his feet and worked on recovering it, he noticed damaged to the right hand levers; the Marshalls helped him to quickly recover; he appeared to be having problems with his front tyre shredding.

Once again, as he adapted to his new surroundings in the 600cc class, rookie Khairul Idham Pawi (Idemitsu Honda Team Asia) was seen overshooting a corner and once again took a scenic route over the gravel to the safety area before returning to the track and then the pits. He did the same in the previous round at Le Mans, it is fortunate that he has been able to do this rather than crash each occasion.

Marquez remained top of the timesheets for most of the first half of the session. However, with around 20 minutes remaining, he lost the prime spot to rookie, Navarro who reduced Marquez’s time by 0.059 seconds. Fellow rookie, Francesco Bagnaia (Sky Racing Team VR46) looked close to improving also, but a poor sector four spoiled his lap. Luthi also looked to challenge but the later sectors also spoiled his times.

More near misses on track

Isaac Vinales (Be-A-WIP SAG Team) had a close call when he passed through turn five. With around nine minutes remaining he nearly lost the front end as he entered into the left and turn. Fortunately he was able to recover but waved his hand in the air in anger. Marquez also had a near miss when he approached turn 10.

Things became more intense as they entered the final few minutes. Both Estrella Galicia 0,0 Marc VDS, and rookie Bagnaia were all on a flying lap at different stages but close on track. Morbidelli initially imrpved once again going second, but Bagnaia slotted in in sixth. Marquez was last to cross the line and improved by over 0.4 seconds on his own time pipping Morbidelli by 0.01 seconds.

On his next lap, the Italian championship leader, Morbidelli improved once again. He became the first rider to lap under 1:50 minutes and set a time of 1:49.731. His next lap saw him crash out ending the session early at turn five of the track; the front folded on him, as it had done or nearly done with others at the turn, and he slid into the gravel where the Marshalls and he struggled to retrieve it

Pasini almost got caught out at the turn moments later, the rear lifted as he entered the turn and he was forced to sit up and run on. Just before that, he and former MotoGP rider, Yonny Hernandez (AGR Team), nearly came into contact at turn 15 as Pasini went in hot through the chicane stealing the space on the inside of the Columbian. Hernandez immediately sat up and gestured at the Italian who eased his pace also.

The session ended, more incidents saw both Marquez and Iker Lecuona (Garage Plus Interwetten) run off track. Marquez had to brake heard and quit his lap as he was held up by a rider in front, and Lecuona, who has just returned from injury followed him; this meant that both of their lap times were cancelled.

Morbidelli quickest at the end of day one in Catalunya

Despite his crash, Morbidelli remained the fastest on track wit him time of 1:49.73. Not only was he the only rider under 1:50 minutes, he set the new circuit lap record since it was modified. Marquez finished the session in second ahead of Simone Corsi (Speed Up Racing) as the highest placed Speed Up bike behind the Kalex machines.

Pasini was fourth quickest ahead of rookie, Navarro who was pushed down to fifth ahead of Hernandez in sixth. Rookie, Bagnaia was seventh ahead of Nakagami, Oliveira and Luthi who completed the top 10 In Catalunya at the end of day one.

Combining the lap times from the two sessions however, the Estrella Galicia 0,0 Mac VDS teammates Morbidelli and Marquez remained on top, however, Oliveira’s time from Free Practice 1 meant that he finished third on combined lap times. Nakagami was fourth ahead of Corsi, Pasini, Navarro, Hernandez, Bagnaia and Luthi who completed the top 10. 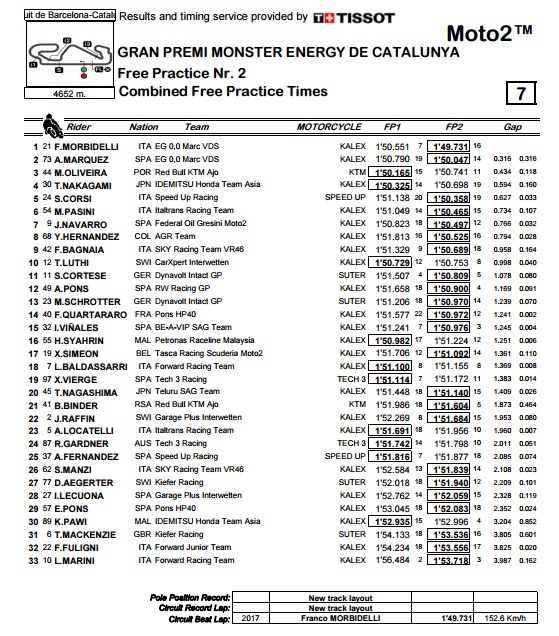 Hamilton leaves it late to snatch pole off dominant Bottas in qualifying&nbsp; 5 days ago

F2 stars miss out on running in FP1 due to weather - Eifel GP 21 days ago
Restore your password
Please enter your user name or email.
Login Member or Writer Panel
Enjoy your own Customized Newspaperwith VAVEL topics' carousels!