Tensions were running high at the modified Circuit de Barcelona where the Moto2 class completed day two undertaking their final Free practice session, before Qualifying to determine the grid for the seventh round of the season, the Gran Premi Monster Energy de Catalunya.

The Spaniard was fast, lapping quicker than most and overtaking as he came across traffic ahead of him; many riders have struggled throughout the weekend to adjust to the compromising corners introduced at the end of the lap.

Fellow Moto2 rider, Luis Salom lost his life the year previous whilst practising at the Spanish Circuit. It was determined that a rider error was what led to his unfortunate and heart-breaking fate as he collided with the side barrier.

Race officials consulted with Luis’ family, and it was decided that the racing that weekend would continue in Luis’ honour. A Safety Commission meeting decided that they would resort to the Formula 1 track, and extra track time was given to compensate Turn 12 being bypassed. Since, extra corners and chicanes have included to again bypass the turn and to try and create safer and larger run off areas.

Tributes continued to be made to Luis, as he was remembered just over a year on from his passing in Catalunya. Nicky Hayden, who lost his life in a cycling accident, and Marco Simoncelli are also continued to be remembered by the paddock and fans worldwide.

Marquez was looking confident, the lead he had over the rest of the pack confirmed this. Miguel Oliveira (Red Bull KTM Ajo) was trying, and doing well, but was still almost one second off his pace in second place. Should Marquez have had an empty track ahead, the margin would have continued to increase. He and former MotoGP rider, Yonny Hernandez (AGR Team) were battling it out for the same tarmac which spoiled the momentum for the to.

Riders were coming very close, especially when they were squeezing through the chicanes almost colliding with different lines. Simone Corsi (Speed Up Racing) and Dominique Aegerter (Kiefer Racing) came close though the chicane of turn 14 and 15. Corsi was looking incredibly aggressive on track using the rear break to slide the rear and to turn his Speed Up machine tighter.

Pasini proves to be a challenge for Marquez

Winner of his first Moto2 at the previous round in Mugello in front of his home fans after an amazing performance, Mattia Pasini (Italtrans Racing Team) went to the top with six minutes of the final Free Practice session with a time of 1:50.284.

Despite many riders making improvements, many ended up getting caught up in the new twists and turns and spent a lot of time using the run off areas placed specifically to prevent crashes and near misses. Marquez was determined though and pushed hard on his last lap. After a red first sector, he slipped back to grey before improving again to red and finished the lap with a new fastest time of 1:50.208 which meant he remained the quickest man on track at the end of Free Practice.

Pasini once again lays down the gauntlet

When Qualifying got underway under the sun later on in the day, it was Pasini who initially landed himself on the top of the leaderboards. A few minutes in however, Marquez set a quickest lap of the weekend with a time of 1:49.408 which saw him go top, and it remained a time that proved hard to beat.

Marini ruled out as others experience trouble in Barcelona

Forward Racing Team rider, Luca Marini has been ruled out of action in Catalunya as he has sustained a shoulder injury that has proven too difficult to ride with. All the Italian can do is sit in the pits and look on as he watched his fellow competitors compete for grid positions.

Unfortunately for Marquez’s teammate, he almost came off as he passed through the chicane at Turns 14 and 15 early on. His right foot came off the peg as he made the left turn through 14, but like many others throughout the classes, he managed to recover without crashing. Pasini and Remy Gardner (Tech3 Racing) almost came into contact at turn 12 as Gardner realised too late that Pasini was behind him, and by the looks of it the Italian Mugello winner was fuming.

Improvements despite difficulties and frustration on track

Luthi and Lorenzo Baldassarri (Forward Racing Team) were improving, displaying yellow sectors on the timing sheets. Luthi improved up to third, and then Baldassarri jumped up to second pushing Luthi down to fourth with Morbidelli between them.

Marcel Schrotter (Dynavolt Intact GP) seemed incredibly frustrated as he found other riders in his way. There were several riders tripping each other up, especially at the likes of the two tight chicanes on track.

Big off for Nagashima

As they approached the final third of the session, rookie, Tetsuta Nagashima (Teluru SAG Team) had a big off that saw him hit the tyre wall head first. He came off at turn four, and both he and the bike had nowhere to go but the barrier. The Japanese rider lay in the gravel dazed momentarily, but luckily he was able to get to his feet himself.

Rookie, Fabio Quartararo (Pons HP40) was next to be caught out when he came off at turn 15 with 10 minutes to go. His Kalex bounced and ended up in the centre of the track, as he quickly jumped to his feet to get himself to safety away from oncoming traffic who narrowly avoided the lone bike. He was able to quickly return to the pits after the Marshalls recovered his bike and was able to get out and complete another lap.

One last incident occurred after the flag when Vierge crashed out at the fast turn 13 that approaches the chicane. He slid on his back as his bike ended up in the gravel, but he was able to get to his feet and hopefully hadn’t succumbed further injuries.

Marquez’s time of 1:49.408 remained enough to secure him pole position ahead of his second home round of the season. With the modifications to the track, there are officially no records as of yet bar day one of Free Practice, but now his Qualifying time has become the best lap time I the Moto2 class at the Circuit de Barcelona.

Pasini will start from second on the grid, lapping just 0.107 seconds slower than the Spaniard, he was the only other rider to lap under 1:50 minutes as the remainder of the pack were over 0.6 seconds slower. Baldassarri gained himself a front row start when he collected third during Qualifying in Spain.

Nakagami will start from fourth on the grid ahead of Luthi in fifth. The German rider had Axel Pons (RW Racing GP) in his way in the closing stages which ruined his momentum, and left Luthi gesturing annoyed at him; something that is very unlike him. They will be joined on the second row by championship leader, Morbidelli.

Oliveira is seventh ahead of the highest placed rookie, Navarro in eight ahead of his home GP. Axel Pons is ninth completing row three. Isaac Vinales (BE-A-VIP SAG Team), Vierge and Sandro Cortese (Dynavolt Intact GP) complete row four for the seventh round of the Moto2 season. 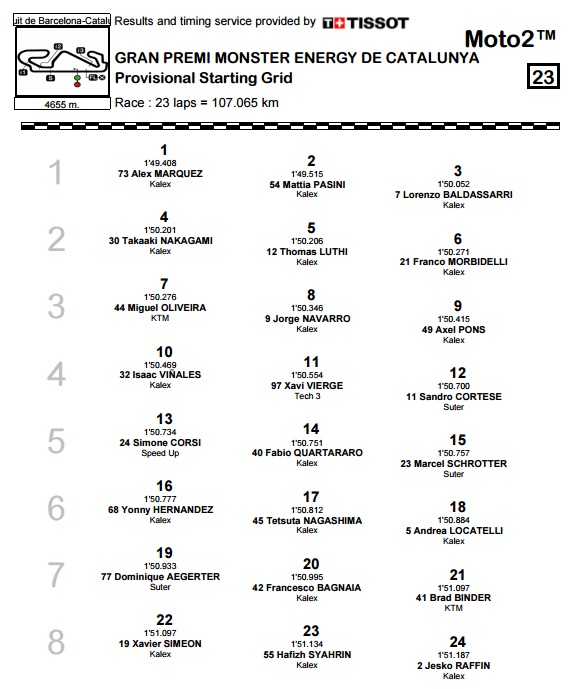 Eifel GP Preview - Who will prevail as F1 returns to Germany? 12 days ago