What would be a difficult weekend emotionally for the Moto2 class saw them return to the Circuit de Barcelona for the Gran Premi Monster Energy de Catalunya, just over one year on since the death of their fallen rider, the late Luis Salom.

Tributes were made, and continued to be made to he and the late Nicky Hayden, as they returned to a modified track where the 600cc rider lost his life. An error of his own during Free Practice unfortunately saw him hit the barrier at turn 12 after running on, and despite everyone’s best efforts he lost his life later in hospital.

After consulting with Luis’ family, directors decided to continue on with the race in Luis’s honour, but immediately they resorted to the Formula 1 layout used by the championship series which allowed them to bypass turn 12; they had no other option as there was no way of extending a non-existent run off area.

Old layout to be used despite modifications

Instead, in time for the seventh round of 2017, the track was modified by adding chicanes that again allowed them to bypass certain turns, to slow the riders and in an attempt to increase safety; by introducing or extending run off areas and gravel traps. The Safety Commission meeting then meant they resorted back to the old layout.

Marquez quickest during the morning warm-up

A cool but sunny start to the morning warm-up session saw pole position man Alex Marquez (Estrella Galicia 0,0 Marc VDS) once again go quickest at the modified track. His pace stood out, and only Mugello winner, Mattia Pasini (Italtrans Racing Team) was able to really get near enough to challenge the Spaniard.

Marcel Schrotter (Dynavolt Intact GP) came close on race day during the warm-up, as he lapped just 0.035 seconds off Marquez’s time. Championship leader, Franco Morbidelli (Estrella Galicia 0,0 Marc VDS) was third quickest during the session although his time was almost half a second off that of his teammate.

Disappointment for some during warm-up

Iker Lecuona (Garage Plus Interwetten) crashed out at turn five of the circuit within the final five minutes. He ran on initially, used the gravel trap to help him slow but as he approached the wall he lost control and dropped it. It then became difficult to recover the bike from the gravel.

Takaaki Nakagami (Idemitsu Honda Team Asia) also, unusually for him, crashed out at turn 10 of the track. He was able to get up and recover the bike, but ensured he gave it a very good look over before he tried to get it restarted with the help of the Marshalls.

Marquez on pole on home turf

Marquez was to be joined on the front row by Pasini in second, and Lorenzo Baldassarri (Forward Racing Team) who completes the front row in third. Nakagami, Luthi and Morbidelli make up row two.

The 23 lap race got underway and as expected it was Marquez who shot away from the start-finish line and took the lead heading into turn one. Behind him, Morbidelli, Pasini and Luthi were left battling for second, as the three took to the right-hander together. Luthi came unstuck however and was forced out wide as he was on the outside of the turn and he ended up dropping backwards and losing several positions by the time he re-joined. Morbidelli managed to pass Pasini who defended his position before he had to succumb to the fellow Italian’s move.

Unfortunately for rookie, Nagashima, he had his second crash of the day at lap 10 of the track. The front end folded on the way into the corner and he slid out on the opening lap. He was straight up to his feet and able to recover his bike and re-join the race at the back of the field.

Marquez creating a lead in Catalunya

Marquez had a one second lead by the time he completed the opening lap of the Gran Premi Monster Energy de Catalunya Moto2 race. Behind him, seeing the Spaniard was getting away, Pasini passed Morbidelli to take second, but by then end of the second lap the gap was increased to over 1.7 seconds.

Pasini wasn’t free from Morbidelli however, as on the third lap,Morbidelli used Pasini’s slipstream to catch and pass him on the start-finish straight. Pasini looked for any way past but struggled meanwhile Marquez was getting further and further away.

Unfortunately for British rookie, Taylor Mackenzie, who was brought in to replace Danny Kent at Kiefer Racing, on his debut at Catalunya, he crashed out at turn three of the fifth lap. A mixture of his own mistake and the bike, the front end folded when he went in too hot. He was straight up to his feet but it was race over in Barcelona.

On lap six of the race, Luthi began recovering positions that he previously lost when he overtook Oliveira to take fourth at turn 10. The German rider was soon on Morbidelli’s team who was trying his best to stay with Pasini. But Pasini was pushing to catch Morbidelli, and in doing so dragging the group of four that he led with him.

Oliveira looked to be dropping off the back as he seemed to be struggling to match the pace. On lap eight, Luthi passed Morbidelli at turn 10, but Morbidelli immediately snapped back. Luthi was on the outside line determined to gain the position and eventually proved successful.

As Morbidelli’s attention was on Luthi, he almost crashed again through the chicane when he his foot came off the peg at the left hander and he almost slid out, just as Oliveira was shoving his KTM up the inside of him. Oliveira looked over his shoulder to see if the Italian had gone round, and they may have touched, but miraculously Morbidelli recovered and continued on.

Battles taking place behind the leaders

The leaders were being chased by Baldassarri and rookie, Jorge Navarro (Federal Oil Gresini Moto2). Behind them, Nakagami was doing what he could to catch those ahead of him; trying various lines as he looked for a way past. A battle for ninth had emerged between Xavi Vierge (Tech3 Racing) and Simone Corsi (Speed Up Racing) amongst others. Vierge ran wide at turn one on the 12th lap and ended up fighting to retain ninth.

During the battle, Cortese came off at turn one and slid out off the track on his back with his legs in the air. Leathers are amazing, and although he did come into contact with the bike, they did their job and he walked away from the crash on lap 12 without injury.

Marquez out of his seat at turn 16

At the front, Marquez, who now had a massive lead was up out of his seat at turn 16 on several occasions.Pasini was trying to chip away at it but time was running out fast. Morbidelli lost another position to Baldassarri who passed him to take fifth on the 14th lap. Rookie, Stefano Manzi (Sky Racing Team VR46) was forced to retire two laps later with problems he was experiencing with the front end of his Kalex.

The battle for ninth soon became the battle for eighth as the rider down meant that a position became available. Vierge was in front with five laps to go, he had passed Navarro, and behind Nakagami, Fabio Quartararo (Pons HP4) and Schrotter were pushing hard. Rookie, Francesco Bagnaia (Sky Racing Team VR46) was partaking too, and lost positions when he ran wide.

As Nakagami and Quartararo were rubbing fairings, Schrotter and Vierge now followed with three laps to go, as Corsi looked on behind. Hafizh Syahrin (Petronas Raceline Malaysia) had attempted to pass Bagnaia at turn one, when he forced Bagnaia out and onto the run-off area leaving the Italian at the back of the group when he rejoined.

Schrotter’s race came to an early end on the penultimate lap when he crashed out at turn 13. He touched Nakagami before the front tucked and he slid out; fortunately he appeared unhurt.

No further action, and everyone finishing the final lap with no further incident saw Marquez win in Catalunya, collecting his second ever Moto2 race which was extra special as it was the 250th grand prix start for the Estrella Galicia 0,0 Marc VDS team. Pasini claimed a consecutive podium in second in Barcelona, and they were joined by Luthi who was third in Catalunya despite his tricky start.

Oliveira missed out on the podium finishing less than one second behind Luthi. Baldassarri was fifth ahead of championship leader, Morbidelli in sixth. Two rookies followed, Navarro was the highest placed rookie in seventh ahead of Quartararo in eighth. Vierge crossed the line in ninth ahead of Syahrin who completed the top 10. Nakagami ended up 11th ahead of Corsi, Isaac Vinales (BE-A-VIP SAG Team), Bagnaia, and rookie Andrea Locatelli (Italtrans Racing Team) who collected the remainder of the championship points.

Morbidelli’s championship lead is now 13 points as he is top with 123 points, and Luthi is second on 116 points. Marquez’s win means he is now into triple figures on 103 points in third. Oliveira is fourth ahead of Pasini and the highest placed rookie, Bagnaia in sixth. Nakagami, Aegerter , injured Luca Marini who did not compete for Forward Racing Team, Corsi and Baldassarri complete the top 10. 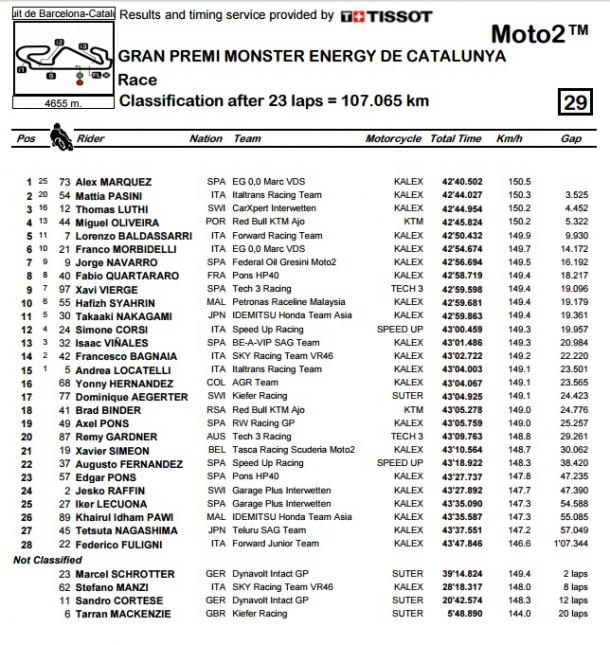 Eifel GP Preview - Who will prevail as F1 returns to Germany? 17 days ago