The damp conditions on the morning of race-day at the Sachsenring, where the Moto2 class met for the ninth found of the season at the GoPro Motorrad Grand Prix Deutschland, meant that the 600cc riders were reluctant to participate in the warm-up session as they were not wanting to risk tings before the race.

Riders missing from the ninth round of the season

Maybe they were right not to, as one rider in particular got caught out with serious consequences.

Damp patches were dotted all over the track and Axel Pons (RW Racing GP) crashed and went unconscious as a result. He was taken to hospital where he was kept in for observations and ended up missing the race.

Lorenzo Baldassarri (Forward Racing Team) was also ruled out due to a fractured ankle sustained at the previous round in Assen. He was to be replaced by wildcard rider, Federico Fuligni. Xavi Vierge (Tech 3 Racing) was also out of action due to injury and was to be replaced by Hector Garzo who collected Tech3’s best ever Moto2 qualifying the previous day as he would start the race from fifth.

Luca Marini (Forward Racing Team) also sat out of the warm-up as they discovered a crack in his shoulder, an injury he had collected many weeks ago.

Rookie quickest during the warm-up

Moto2 rookie, Francesco Bagnaia (Sky Racing Team VR46) was the quickest during the warm-up with a time of 1:26.014. He ended up just 0,084 seconds quicker than former winner at Sachsenring, Xavier Simeon (Tasca Racing Scuderia Moto2), and Thomas Luthi (Car Xpert Intwerwetten) in third.

Lining up on the grid in pole position was championship leader, Franco Morbidelli and his Estrella Galicia 0,0 Marc VDS teammate, Alex Marquez was second. They were to be joined on the front row after qualifying, by local rider, Sandro Cortese (Dynavolt Intact GP).

Mattia Pasini (Italtrans Racing Team), who learned of the fact that he was disqualified from the round in Catalunya where he scored second, because he had an un-specified oil, led the second row in fourth ahead of wildcard, Garzo and Miguel Oliveira (Red Bull KTM Ajo).

Clean start in the Moto2 class

The 29 lap race began and the whole grid got away cleanly. Immediately, a group of four formed at the head of the pack led by Marquez who guided them into turn one of the race. Garzo’s experience came through immediately unfortunately as he dropped places and unfortunately went backwards down the ranks.

Marquez was being chased by Morbidelli, Luthi and Cortese, and soon enough Luthi had made his way up to second on the track. Rookie, Fabio Quartararo (Pons HP40), who got a great start was forced wide and lost many places and re-joined in 13th.

Bagnaia loses places after a moment

Bagnaia, also had a moment in fifth on the second lap that allowed Pasini to pass through but Bagnaia worked hard to reclaim the spot. Luthi used an inside line against Marquez to get him to front at the first right hand turn of the circuit after spinning the rear before consolidating the place. Marquez went wide further around the track and Morbidelli was able to get through pushing the Spaniard down to third on lap three.

Disaster struck on lap four of the race for two of the riders at turn 12. Wildcard Garzo, who did so well in Qualifying, and Andrea Locatelli (Italtrans Racin Team) both came off at turn 12. They both had separate but similar incidents. Garzo went down first as he was further ahead in the race, the front tucked and as he slid through the gravel his bike somersaulted, Locatelli went down moments later and he and the bike did the same.

Fortunately for Garzo, Locatelli’s bike somersaulted over him and did not come into contact with him; he would not have been able to do anything about it. Locatelli was able to get up quicker, but Garzo required assistance to get to the safety area of the track; luckily they both walked away.

Marquez crashes out of third in the race

Then on the following lap, disaster struck again, this time it was Marquez who came off. At turn two, the rear of his bike slid and threw him off. Both Marquez and the bike started to slide but when they hit the gravel they rolled and Marquez got caught up with his bike that went over him. Although stunned at first, he was able to get up to his feet and return to the pits where his older brother, Marc Marquez came and checked on him.

Luthi led and was being followed closely by Morbidelli. Marquez’s crash meant that Cortese was left on his own out on track however he was getting caught by Oliveira in fourth. Morbidelli was on Luthi’s tail and looked to make a move on the Swiss rider on lap seven at turn 12. Instead, Oliveira passed Cortese to take fourth at the turn, taking a clean line up the inside that he set up before the entered into the long, left hand turn, before out-braking the German rider.

It was not until the same turn at the next lap that Morbidelli actually carried out his move, and he took the lead from Luthi with 22 laps to go. Luthi remained in touch however. Behind the front runners, Corsi in fifth, looked to attack Cortese on the inside of the right hand turn, turn one on lap 10. He attempted to out-brake but Cortese braked later, and so a few corners later Corsi made his move that stuck and he took fourth then from the German rider instead.

Oliveira was flying and he was able to close the gap between him and the leaders to less than a third of a second. Luthi looked to retain his lead at the start of the 12th lap at the inside of turn one but Morbidelli out-braked him.

Luthi crashes out of second

Out of nowhere though, at turn 12 of the lap, Luthi crashed out of the race allowing Morbidelli to get away at the front. When easing on the brakes the front folded on Luthi’s Kalex and he slid out of the race into the gravel where he was unable to recover his bike. It was gutting to watch as he had the potential to win; he appeared unhurt.

Seeing Luthi come off ahead of him and that Morbidelli had a strong lead ahead of him, Oliveira completed a new lap record has he upped his game in pursuit of the Italian leader. Behind him, Bagnaia had managed to catch and pass Pasini and then continued in pursuit of Corsi in third.

Oliveira reduces the gap by setting a new lap record

Oliveira worked hard to reduce the gap between him and leader, Morbidelli over the next couple of laps. He caught him by lap 19 and took a sneak peak up the inside at turn 11. He took another look up the inside on the right-hand turn of turn one on lap 20.

Further down the field there were other changes. A battle of the rookies took place between Quartararo and Stefano Manzi (Sky Racing Team VR46) for 15th, Dominique Aegerter (Kiefer Racing) struggled with pace after he had made a visit to the pits (he eventually retired), and rookie, Jorge Navarro (Federal Oil Gresini Moto2) managed to catch and pass Cortese at turn one of lap 22 (who had been passed by Pasini at this stage) to take sixth. The 2016 Moto3 champion, Brad Binder (Red Bull KTM Ajo) then also passed Cortese pushing him down to eighth.

Battle for the final podium spot

A battle began briefly between Bagnaia and Corsi for the final podium position. With three laps remaining, Bagnaia passed Corsi at turn 12, but Corsi retaliated on the straight. Bagnaia then squeezed up the inside of the Italian at turn one of the penultimate lap and this time made it stick,.

Oliveira makes attack for the lead

Ahead Oliveira was right on the back of Morbidelli and after following him for several laps, decided to make his first attack for the lead on the penultimate lap. He passed him and took the lead for the first time from the Italian. But then as they began the last lap, Morbidelli out-braked Oliveira heading into turn one. They were so close on track that Oliveira was forced wide. This in turn spoiled his momentum and allowed Morbidelli, who had better rhythm, to get away.

Oliveira chased the Italian right up until the end of the race, another attack looked imminent if he could just get close enough. The last corner would have been his last attempt, but Oliveira was not close enough, and Morbidelli beat him to the line to claim his sixth victory of the season. Oliveira was a close second, finishing just 0.066 seconds behind the winner; he would have to wait until another time to bring the new KTM Moto2 machine to the top step of the podium.

Finishing the race, and getting another podium under his leathers in his debut season, rookie Bagnaia finished third in Germany; he had closed the gap between him and the leaders to just over half a second byt the end of the race. Corsi just missed out on the podium, finishing fourth at the Sachsenring as the top Speed Up rider, and Pasini was fifth.

Five rookies in the points

Navarro was the second highest placed rookie in sixth ahead of rookie number three, Binder in eighth. Cortese finished his home round in eighth as the top Suter ahead of fellow German rider and teammate, Marcel Schrotter (Dynavolt Intact GP) in ninth, and Takaaki Nakagami (Idemitsu Honda Team Asia) completed the top 10.

Hafizh Syahrin (Petronas Raceline Malaysia) was 11th ahead of the top Tech 3 rider, Remy Gardner (Tech 3 Racing) in 12th. Rookie, Quartararo was 13th ahead of former Sachsenring winner, Simeon and rookie, Manzi in 15th collecting the last championship point in Germany and making it five rookies in the points.

Augusto Fernandez (Speed Up Racing) was black-flagged and disqualified from the race. 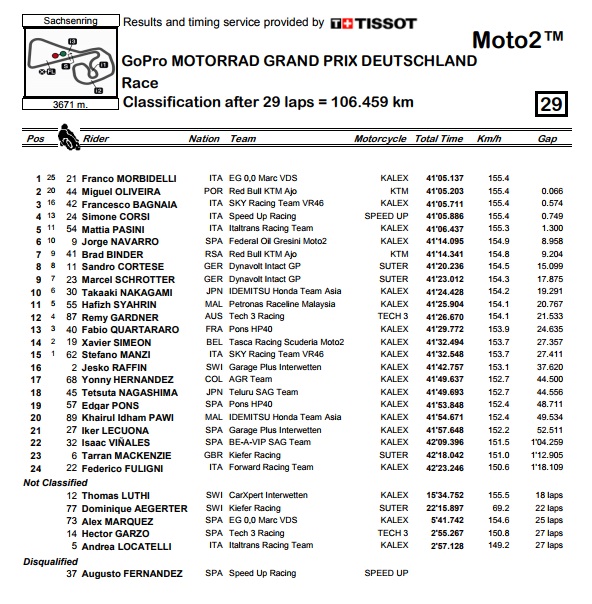 Morbidelli’s sixth win of the season means he is flying at the head of the championship table that he leads now on 173 points; what a position to be in heading into the summer break at the midway point. Despite collecting a DNF, Luthi remains second but is now 37 points behind on 136 points. Oliveira’s second means he is just 22 points behind Luthi in third on 114 points, jumping ahead of Marquez who now lags the Portuguese rider by one point after a DNF in Germany.

Pasini’s disqualification in Catalunya means that he is now behind Bagnaia in the championship. Bagnaia is on 78 points in fifth whereas Bagnaia is now behind him in seventh. Corsi, Aegerter and Schrotter complete the top 10 at the hallway point of the season.

Eifel GP Preview - Who will prevail as F1 returns to Germany? 16 days ago