Greeted by bright skies and a clean track, the Moto3 class took to Silverstone for the first day of Free Practice ahead of the British GP. A track, designed for the Formula 1, but used by the bikes as the Circuit of Wales Saga continues, proves extremely enduring for the 250cc engines that will be at full throttle throughout the lap.

Made up of fast corners and long straights, the Moto3 class would need to work hard to benefit from those in front of them, the slipstream from another rider would reduce their own lap time significantly and so in preparation for Qualifying and the race, things were close on track.

The first session, FP1 was a quiet session compared to many we have seen so far throughout the 2017 season. The riders knuckled down and pushed hard to try and match the previous race pace. The Circuit Record Lap time of 2:13.64 remains unbeaten after it was set during the 2014 race by Jakub Kornfeil; the Best Ever Lap time was set by Jorge Navarro last year with a time of 2:14.440.

Canet tops the opening session of the British GP

By the end of the opening session, it was Aron Canet (Estrella Galicia 0,0) who came closest with his time of 2:14.545; there was still a long way to go but it was a great start for the Spaniard. He finished up almost a second quicker than anyone else on track as Red Bull KTM Ajo rider, Bo Bendsneyder was 0.857 seconds off his pace.

Bendsneyder, from the Netherlands would be considered favourite to win as he made it to the podium last year behind his former teammate, 2016 Moto3 champion, Brad Binder (Red Bull KTM Ajo). Francesco Bagnaia (then with Northgate Mahindra Aspar) was second, but both riders have moved up to the Moto2 class opening up to the competition for 2017.

Andrea Migno (Sky Racing Team VR46) trailed Bendsneyder by 0.001 seconds. Recovering from a virus, his teammate Nicolo Bulega (Sky Racing Team VR46) benefited from the extra rest and was fourth ahead of Enea Bastianini (Estrella Galicia 0.0) who was the highest placed out of the riders who competed last season.

Mir about to make history

Sixth after FP1, championship leader, Joan Mir (Leopard Racing) could make it into the history books as a win at Silverstone will mean he will become one of the only riders to win more than 11 rounds in one season since nine times world champion, Valentino Rossi all that time ago.

His feathers were ruffled towards the end of the session however, as he found rookie, Ayumu Sasaki (SIC Racing Team) sticking his Honda up the inside of him, heading into a left had corner at the end of on of the straights. Spanish rider Mir got revenge quick and also let the Japanese rider know how he felt about his manoeuvre.

Finishing 12th was Romano Fenati (Marinelli Rivacold Snipers). He had issues during the session, as he was forced to retire on his out lap and return to the pits where his team had to use vital time to rectify things.

Canet remains quickest at end of day one

The layout and setup of the circuit saw the riders remain tight on track as they used each other’s presence for their own advantage. Another clear-of-incident session saw a late attack in the sunshine.

Attacks came from all directions as the riders worked hard to reduce their time and eventually the top 10 were covered by less than one second at the end of day one. Canet remained unstoppable however and after reducing his own time down to 2:13.320 (a difference of over a second) he remained quickest at the end of day one.

All riders improved during FP2

All riders improved during the second session on track as the temperature increased. Fenati was second quickest, a great result despite having not attended for two years; his best time was just 0.101 seconds of session leader, Canet.

Bendsneyder, who was the highest placed out of the remaining list of finishers in the class compared to last year, was third quickest. Injured Martin, had another extraordinary performance after his returning podium at the Red Bull Ring as he was fourth ahead of Fabio Di Giannantonio (Del Conca Gresini Moto3) in fifth.

British rider, McPhee, who has an important weekend ahead of him especially with it being his home round, finished up 15th and over 1.3 seconds off the pace of that of Canet.

Spanish rider, Jaume Masia who is replacing injured Darryn Binder for Platinum Bay Real Estate is making his Moto3 debut at Silverstone and finished the opening day in 25th. Two British riders, Jake Archer and Tom Booth-Amos are also making wildcard appearances with the City Lifting/RS Racing Team aboard KTM machinery and they ended their opening day as Moto3 riders in 29th and 28th respectively. 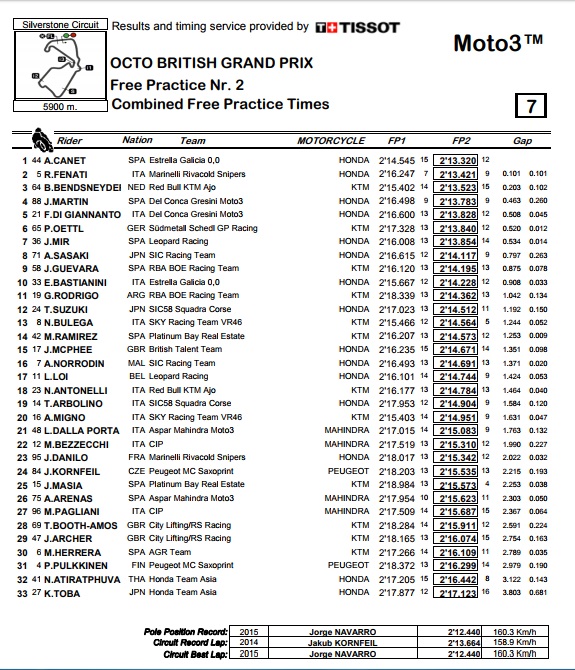