The long awaited British round of the 2017 MotoGP season got underway at Silverstone after two weeks of announcements for many riders and teams indicating that once again there will be changes to the paddock for 2018.

Movement in the paddock announced since the Red Bull Ring

Scott Redding (Octo Pramac Racing) is going to be moving to Aprilia Racing Team Gresini, unfortunately it is one Brit in and one Brit out as rookie Sam Lowes will be given the push as he apparently hasn’t performed as well as the team had liked. Redding previously lost his ride with Octo Pramac Racing to Jack Miller (Estrella Galicia 0,0 Marc VDS) but as picked up a factory ride instead.

Lowes is left looking for work and with limited places left in the MotoGP class, the question is will he remain? Karel Abraham will remain with Pull & Bear Aspar Team. He got a great start to his returning season which made them believe in him enough to return.

Two more rookies to be welcomed into the MotoGP class

The MotoGP class will be welcoming two more rookies as Franco Morbidelli, who moves up with his team Estrella Galicia 0,0 Marc VDS, will be joined by his future new teammate, Thomas Luthi (CarXpert Interwetten); the Swiss rider more than deserves the promotion after years of displaying a cool, calm and incredibly smooth riding style.

Also moving up, Takaaki Nakagami will be joining Cal Crutchlow at LCR Honda. He has had a quiet season compared to previous but the team see his talent and his potential which he has displayed in the past.

Conditions were great for British summer as the sun was out, the clouds were high and the track was clean and dry for Free Practice 1. Following the Moto3 class who opened up the weekend’s events, things were looking great for the British GP.

Lowes crashes out as Petrucci breaks down

Unfortunately for Lowes, he crashed out at turn 12 midway through the opening Free Practice session. After making it over the bumpy right hander previously, when he hit the left turn, the front folded and the bike slammed down before he and the machine slid out. Lowes was able to get up, but limped to the side trying to figure out what went wrong.

Danilo Petrucci (Octo Pramac Racing) had a breakdown with a few minutes to go. He safely was able to pull up an park at the side of the track before sauntering back to the pits with there being no need to rush as time had ran out.

A flying lap from last year’s race winner at Silverstone, Maverick Vinales, on his last attempt with soft Michelin Power Slicks at the end of the session saw the Spanish Movistar Yamaha rider go top with a half second cushion. Having gotten off to a great start to his debut season as a factory Yamaha rider, Vinales will most likely be hoping for a repeat of history as eh returns to the home of his debut MotoGP win; when he brought Team Suzuki Ecstar back to the podium).

His fastest lap time of 2:02.130 was just over 0.2 seconds off the Circuit Record Lap set by Dani Pedrosa (Repsol Honda) in 2013. There is still some way to go to beating Marc Marquez’s Best Ever Lap during Qualifying two years ago as the Repsol Honda rider holds the record with a time of 2:00.234.

Jorge Lorenzo (Ducati Team) was second quickest during the opening session, his time dominated the timesheets until his lead was stolen at the end. British rider Crutchlow, who will be feeling the pressure to do well at his home round, was third as the top independent team and Honda rider. Crutchlow was third at the British GP after securing pole in 2017. Marquez was fourth ahead of Rossi, Alvaro Bautista (Pull & Bear Aspar Team) and rookie, Johann Zarco (Monster Tech 3 Yamaha) in seventh.

Aleix Espargaro (Aprilia Racing Team Gresini) was eighth ahead of Redding and winner of the last round at the Red Bull Ring in Austria, Andrea Dovizioso (Ducati Team) who completed the top 10. Miller was 11th and rookie Alex Rins (Team Suzuki Ecstar), who is donning a black helmet, gloves and boots as tribute to the terror victims and families in Barcelona, was 12th after FP1.

Huge highside for Marquez at beginning of FP2

Within minutes of Free Practice 2 getting underway, Marquez found ‘the limit’ he apparently searches for as he began to push. Heading out of the chicane at Becketts, he accelerated out of the left before he was to head down the main straight when the rear spun and he high-sided. He was slammed down hard on the track and tumbled and was left stunned in the gravel. He finally got to his feet and was able to walk to the side of the track however he did appear hurt.

Marshalls saw to his bike that was also battered from the crash as he made his way back to the pits via scooter; he was not in the garage long when he completed a quick debrief and was back out on track on his second bike.

Competition was on back on track

Meanwhile, the competition was heating up on track as they pushed to reduce the lap times down to record pace. Crutchlow, on his new machinery unveiled before the British round got underway, was able to supersede the Circuit Record Lap, but over half an hour still remained and several riders were pushing hard for that top spot.

Crutchlow improved on his own time, but then after a few laps of recovery from his crash shortly before, Marquez was back on form and took to the top of the timesheets with a mid 2:01 minute lap.

KTM riders need to up their game

Pol Espargaro shot up to third with less than 15 minutes to go after an extraordinary lap that saw him go quickest with Red Bull KTM Factory Racing during the opening two sectors. He dropped to a personal best time in both sectors three and four which prevented him from going top. The two riders and their teams are coming under pressure for their places as changes are being made throughout the paddock and they want to remain competitive.

Riders were proving to be quickest during the opening sectors than the Honda riders, but then come the final two sectors they appearedto struggle. With five minutes to go, both Lorenzo and Crutchlow were flying and with a soft rear tyre, Crutchlow was able to improve on Marquez’s previous time by 0.7 seconds and was able to break through the 2:01 minute barrier.

Moments later, Marquez experienced his second crash of the session this time at turn 13 were he had a few close calls earlier on in the morning. Having been out on the track for a while, he tucked the front early on in the turn and slid out, he luckily managed to get up to his feet quickly while sliding and got out of the way of his motorcycle that slid towards him. He returned to track within no time with assistance from the Marshalls and returned to the pits.

Rossi has a successful Friday

The chequered flag went out and Rossi was hot on the pace displaying red sectors during the first two of the track, but then he slipped back to a personal best in sector three. Wearing the soft Michelin Power Slick on the rearm he was unable to improve further and remained second where he placed when he completed a better lap the time before.

Crutchlow the man to beat after day one

Crutchlow topped the timesheets at the end of day one; a fantastic result for the Brit on home turf. His time of 2:99.897 was 0.241 seconds quicker than second place man Rossi, and he lifted the front wheel all around the track as he made his way back to the pits.

Bradley Smith (Red Bull KTM Factory Racing Team) was forced to give a push to Lorenzo who did not make it back to the pits due to a failure on the bike. Again all riders were able to improve on their previous times during Free Practice 1 meaning that the order remained the same from Free Practice 2

Behind Rossi in second, was his new teammate for 2017, Vinales who finished up the day in third. Aleix Espargaro was third aboard the Aprilia Racing Team Gresini machinery collecting another great result for the team during the build-up in fourth.

After his two crashes, Marquez still manage to end up fifth on the timesheets as the second highest placed Yamaha with Crutchlow being top. Lorenzo was sixth ahead of Pol Espargaro who was seventh on the KTM still in its debut season. Rookie, Zarco, Dovizioso and British rider Redding completed the top 10 at Silverstone. 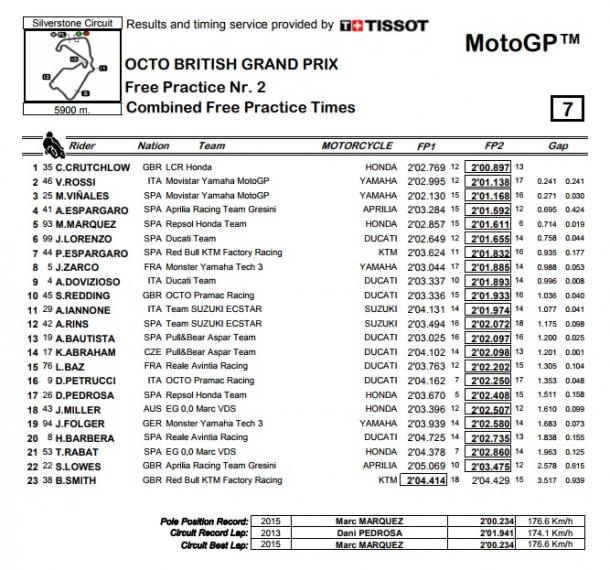 After the Free Practice session was over, the riders completed a practice flag-to-flag pit stop which was designed to practice the new procedure that had been suggested to enhance safety in the pit lane for riders and their teams; following on from Andrea Iannone’s (Team Suzuki Ecstar) crashing out during a previous round.

The procedure which consisted of the bikes being positioned at 90 degrees and each location being identified by a man holding a sign, appeared to work, despite the fact little Dovizioso nearly fell off the other side of his second bike. But, the riders returned to the pits at different times rather than in a large group and so everyone appeared to be able to make the switch cleanly enough whilst checking for oncoming traffic.

In all fairness, it was not a true representation of the procedure as it was completed without the added pressure experienced during a race. The closest indicator of the procedure’s success came when Vinales made his switch, but because of his position and the signal from his mechanic, he saw Petrucci who was next door coming to him and was able to pause momentarily. After the practice pit stop, the riders returned to the track to complete their practice starts.