After a busy week of contract talks, agreements and announcements, the Moto2 riders took to the track for the first of their Free Practice sessions at a sunny Silverstone ahead of the British GP.

The Moto2 will say goodbye, and the MotoGP will welcome two more rookies for the 2018 season. Joining Franco Morbidelli who already announced he will move up to the MotoGP with his team, Estrella Galicia 0,0 Marc VDS, it was confirmed that he will be joined that Moto2 rival and future new teammate, Thomas Luthi (CarXpert Interwetten) in 2018; a well-deserved promotion for a fantastic rider.

New faces in the Moto2 paddock at Silverstone

There were some new faces in the Moto2 paddock for Silverstone, and some familiar faces making an appearance at the British round. Replacing injured Xavier Simeon with Tasca Racing Scuderia Moto2, racing legend Alex de Angelis takes the reigns of the Kalex while Simeon is out with a damaged shoulder. American Joe Roberts is again in for Yonny Hernandez with the AGR Team.

British rider, Jake Dixon, who usually competes in the British Superbikes, has been brought in to replace injured rider, Marcel Schrotter with the Dynavolt Intact GP team. Dixon is making his Moto2 debut aboard the Suter machinery.

Pawi crashes out at turn 12

During the opening session, rookie Khairul Idham Pawi (Idemitsu Honda Team Asia) crashed at turn 12. In a similar crash to MotoGP rookie, Sam Lowes (Aprilia Racing Team Gresini) in the session previous, the front folded on his Kalex at turn 12 slamming the bike down and causing he and the machine to slide out at the fast turn.

It was Alex Marquez (Estrella Galicia 0,0 Marc VDS) who dominated the top spot of the timesheets during the majority of the session until the final 10 minutes when he came under pressure from the likes of Mattia Pasini (Italtrans Racing Team) and Dominique Aegerter (Kiefer Racing).

He was able to improve on his own time by one thousandth of a second, but his lap was cancelled however he had to avoid mistakes made on that lap where he travelled on to the green patch at turn 17, should he wish to remain top.

Aegerter quickest at the end of FP1

A late lap from Aegerter saw him top the timesheets as he was eventually the only man to challenge Marquez for the top spot. His late lap time of 2:08.191 was an improvement of 0.172 seconds on Marquez’s time leaving him top of the timesheets at the end of FP1. Marquez remained second quickest and Portuguese rider Miguel Oliveira (Red Bull KTM Ajo) was third quickest.

Still recovering from injuries, Lorenzo Baldassarri (Forward Racing Team) indicated he is back to flying form as he was fourth ahead of championship leader, Franco Morbidelli (Estrella Galicia 0,0 Marc VDS). Nakagami was sixth ahead of Simone Corsi (Speed Up Racing) in seventh, Luthi eighth, Pasini ninth and Isaac Vinales (BE-A-VIP SAG Team) completed the top 10.

Marquez lays the gauntlet down within minutes of FP2 starting

The competition was on from the get go when the second Free Practice session got underway for the Moto2 class with Marquez within the first quarter of the session, smashing through the 2:00 minute barrier. He continued to improve, and dominate, as others tried to match his time but to no avail.

Unfortunately for Sandro Cortese (Dynavolt Intact GP), he came off at turn 16 of the track before the halfway point. He appeared unhurt and was able to get going straight away with the help of the Marshalls.

Pasini and Nakagami were pulling out all the stops it appeared to get a quick time as at turn 8, Pasini attempted an inside line but was unable to quite catch and pass the Japanese rider and fortunately he was able to keep out of his way in the process.

Debut day on the job ends early for wildcard, Dixon

Later on in the session, British wildcard rider Dixon had quite a big off at turn six of the track. Fortunately he appeared unhurt and was able to make his way back to the pits but his day ended early. The 2016 Moto3 champion, Brad Binder was one of two riders who took a scenic route over the grass after missing the braking point at different turns.

Marquez tops the timesheets at the end of day one

The flag went out and the riders completed their best laps and although many were able to achieve personal best lap times, none were able to still come close enough to Marquez at the top. He ended the session and the day quickest with a time of 2:07.491.

Second at the end of the day and 0.272 seconds off Marquez’s time, was Miguel Oliveira (Red Bull KTM Ajo) who is working incredibly hard to get that first Moto2 win for him and KTM. Pasini was third quickest managing to lap faster than FP1’s quickest man, Aegerter on the Suter, and Nakagami who ended up fifth.

Luthi, after signing his new contract was sixth at the end of day one ahead of championship leader Morbidelli in eighth. Baldassarri ended up eighth ahead of Simone Corsi (Speed Up Racing) as the top Speed Up rider, and Luca Marini (Forward Racing Team) completed the top 10.

As for the special apperances, De Angelis was 28th, and Dixon ended up was 3st as he failed to finish the session however both riders were under three seconds off the pace of leader Marquez. 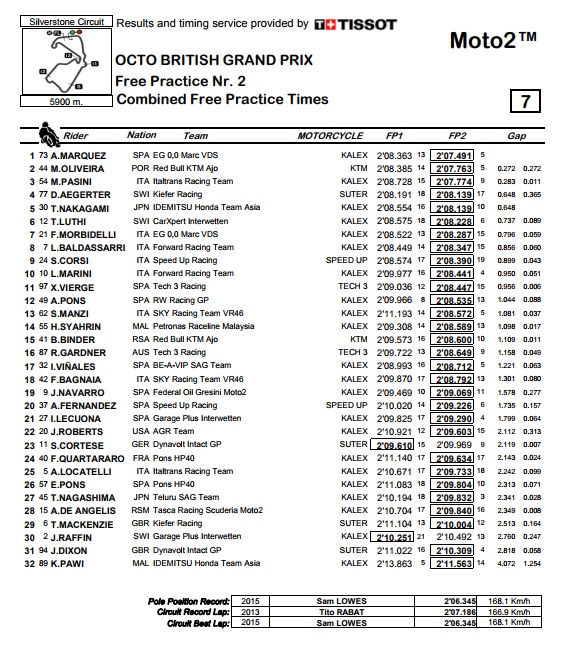