The women’s 2015-16 Alpine Skiing World Cup season concludes at the World Cup Finals this week in St. Moritz, Switzerland. The super-G and giant slalom titles are still open in the final race whereas the downhill and slalom titles are already decided. Lara Gut has practically secured her first overall World Cup title as the injured Lindsey Vonn is out of competition for the rest of the season and the other potential title challenger Viktoria Rebensburg doesn’t race in slalom.

The following table shows how many points each skier would have in different result scenarios. 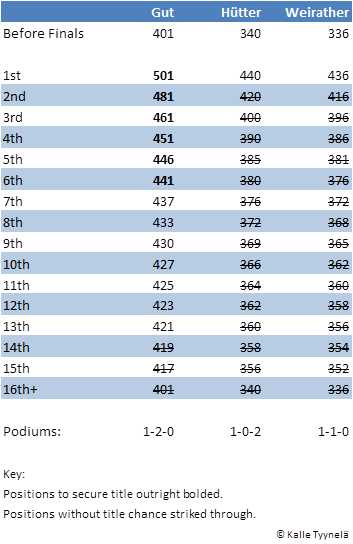 With a routine performance, Gut should surpass Vonn. Only once she has missed the top 13 in super-G this season; that was a 16th place in the snowfall of Soldeu. Of the other races, seventh place of early December's Lake Louise super-G is Gut’s worst result, in the other five starts she has finished inside the top six which would be enough in St. Moritz to win the title outright. Besides she finished in second and first places on the two downhill training runs in St. Moritz, so the slope should obviously suit her well also in super-G.

All Hütter and Weirather can do in St. Moritz is to try to win and see if Gut had a bad day, though the chance for that happening is slim. Gut is the favorite here; winning a race is a big task for Hütter or Weirather, and even then Gut needs just a usual race performance. Gut can also race without big pressure of this discipline title; she has basically secured the overall title which is the skiers’ main goal.

In 2013, Lindsey Vonn missed the final races of the season due to an injury, yet won the downhill World Cup title by one point when the cancellation of the final race denied Tina Maze the chance to surpass her. Once again, her rivals can’t afford a cancellation of the race as it can’t be rescheduled, yet the forecast is for sunny weather on Thursday so the race should happen.

The World Cup Finals week concludes on Sunday with the women’s giant slalom with two title contenders remaining. Eva-Maria Brem extended her lead to Viktoria Rebensburg to 52 points by beating her for the second season victory in in the penultimate race of Jasná.

Below you can see the points table for the title contenders.

As we can see, Brem can win the title outright by finishing inside the top four. On the other hand, Rebensburg must finish on podium to have any chance for the title.

With a routine performance, Brem is close to winning her first discipline title. Only once this season she has missed the top four in giant slalom; that was an eighth place in the season-opening Sölden race.

Although they aren’t title contenders, the likes of Lara Gut, Federica Brignone, Nina Løseth, and Ana Drev may also play a role in the title battle. They have potential to finish on top, meaning Brem can’t afford having a safe run in order to finish inside the top four. On the other hand, also Rebensburg needs to perform at her best to have a title chance in the case of Brem underperforming. Brem is definitely the favorite, even if she fails to have a good race, Rebensburg would need a top result.

The Masters: Justin Rose talks about opening 65 6 days ago

The Masters: Power Rankings 9 days ago

The Masters Tournament 2021 preview: Tee times for Round one, groups, and who to watch out for 9 days ago

The Players: Rory Mcilroy's title defence gets off to horror start a month ago

The Players preview: Tee times and which groups to follow in the opening two rounds a month ago
//