To the canvas! Saul Alvarez knocks down Caleb Plant and by the way of K.O. becomes the best Mexican pound for pound. The fight ends in the penultimate round.
12:29 AM7 months ago

Canelo' goes to the front trying for the K.O. He wants to finish it before the 12 episodes.
12:26 AM7 months ago

The ninth round ends, none of the fighters can make the difference in this episode. Slightly 'Canelo' locks the American in the corner.

Plant's defense for Alvarez gets complicated, American responds to defense

Upper cut by Alvarez that approaches the K. O, Plant can't keep his guard up

Canelo dominates half of the fight, ballots lean towards the Mexican

Although the American fighter defends himself by going around the ring, the emotions of the duel begin to ignite and 'Canelo' does not cease in his quest for the title.

Canelo dominates the fourth round with a left-handed combination that cracks Caleb Plant's face open on the right cheek.

Saul Alvarez is encouraged and tries with a couple of jabs that force Plant to retreat, the third round is for the Mexican.

Canelo' tries a couple of combinations and manages to connect the face of his opponent, Caleb Plant ends the second episode with a visible blow to the right eye.

Here is the summary of the first round

Saul Alvarez walks in front studying Plant's guard, the American manages to connect a couple of lefts but 'Canelo' pulls his opponent back to the ropes.
11:47 PM7 months ago

The official presentation is made, the awaited duel between Canelo and Plant will begin shortly.
11:45 PM7 months ago

Canelo to the ropes

Canelo makes his presentation to the ring accompanied by 'Fher' from Maná who sang 'El Rey' by Mexican author José Alfredo Jiménez.
11:37 PM7 months ago

Caleb Plant steps into the ring, waits for Canelo for the opening bell of the fight
11:32 PM7 months ago

Prior to the fight, Caleb Plant sent a message to the Mexican boxer.

"Canelo said that Mexicans don't play games. That's good to know because where I'm from we don't play games either. So on Saturday be sure to watch the fight because you will see the first undisputed super middleweight champion: Caleb Plant."

The hymns are playing

The national anthem ceremony begins, first the Mexican National Anthem is sung followed by the interpretation of the United States of America.
11:19 PM7 months ago

Caleb Plant also gets ready in the dressing room to begin the bandaging process, followed by the donning of gloves. 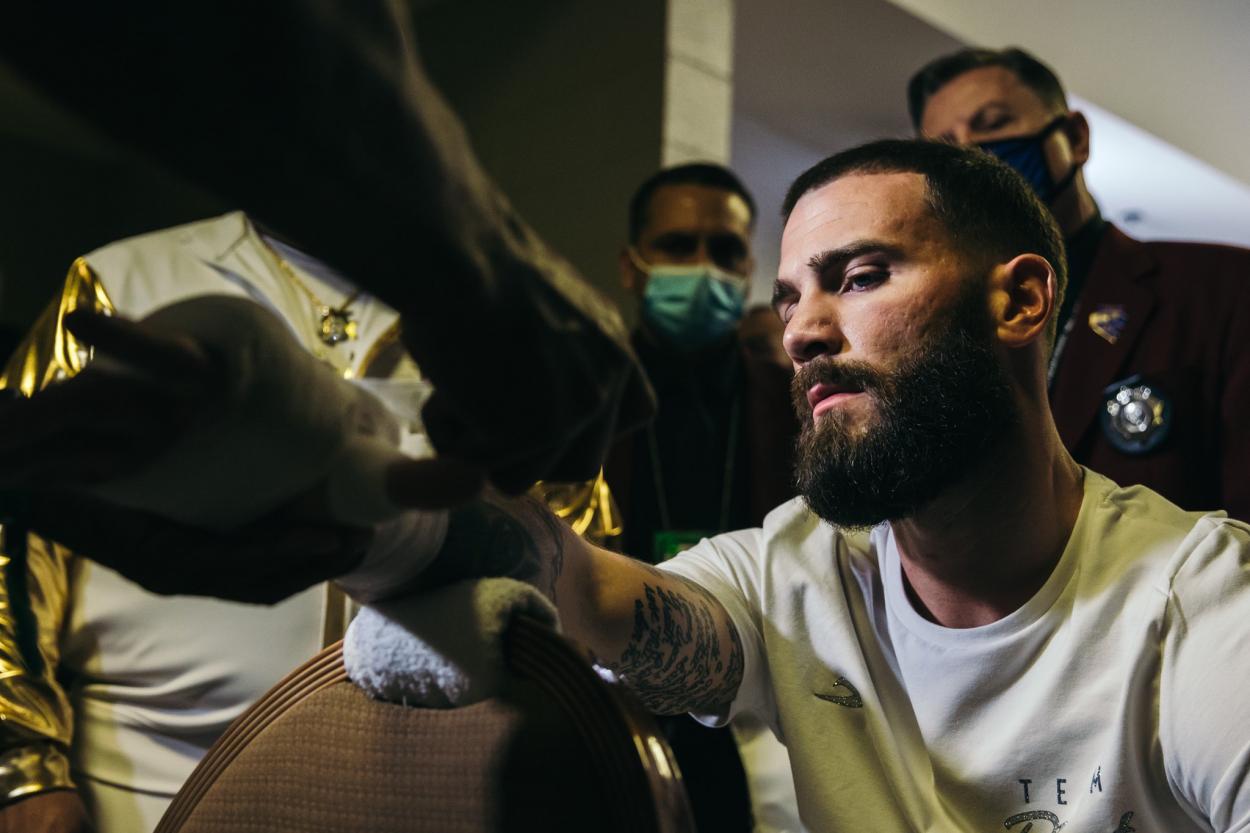 Anthony Dirrell vs Marcos Hernandez ended in the fourth round when Dirrell unleashed an uppercut that knocked his opponent out via knockout.
11:13 PM7 months ago

In one of the preliminary bouts 'Rey' Vargas faced Leonardo Baez where in the tenth episode Vargas won by decision.
11:09 PM7 months ago

Canelo' arrived at the MGM Grand Garden Arena to get ready minutes before the fight and the bandaging begins for the Mexican boxer. 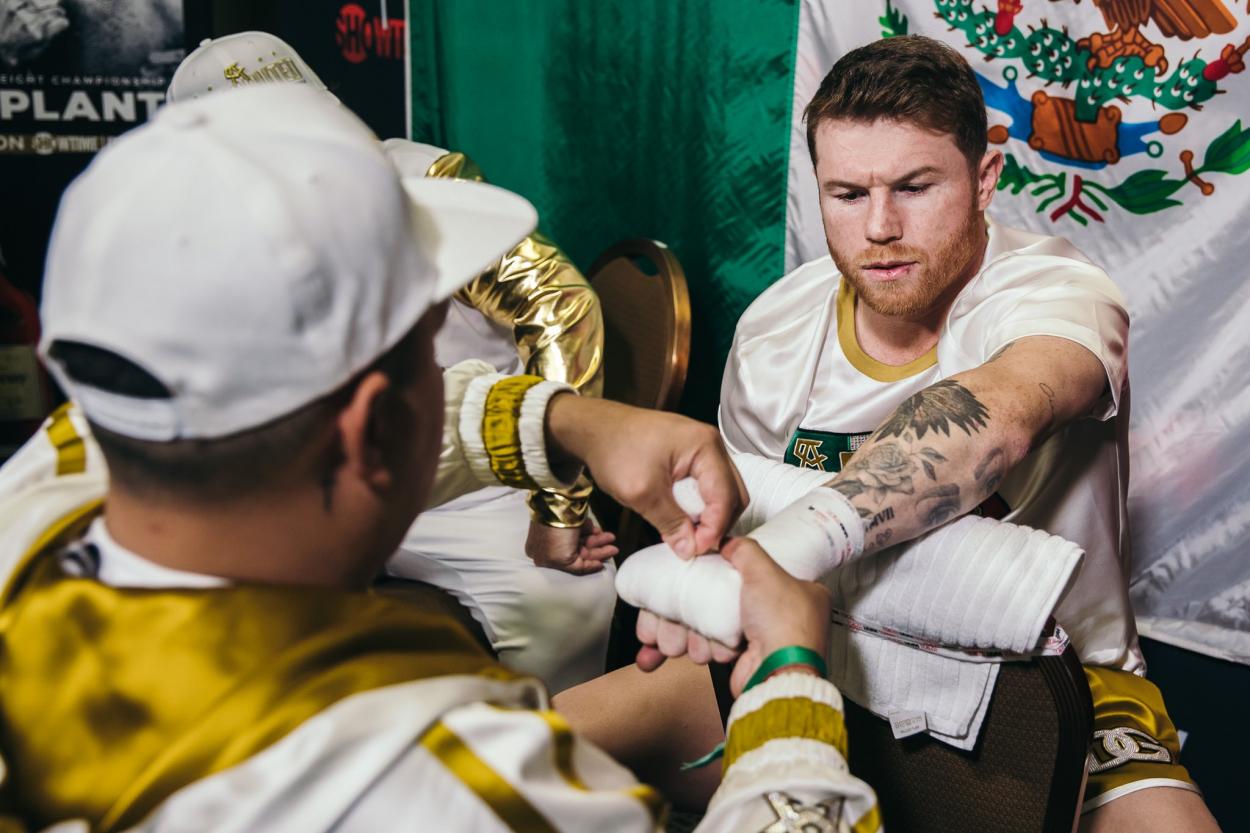 Yesterday, during the weigh-in ceremony the fighters exchanged a couple of insults that ignited the duel even more than it already was. Anchorman Mike Tyson was in the middle of that exchange of words.

"He still sucked my dick but I'm going to take it out on the bastard, it was like 10 times.... Fuck his mother too," Canelo told TV Azteca at the end of the ceremony. 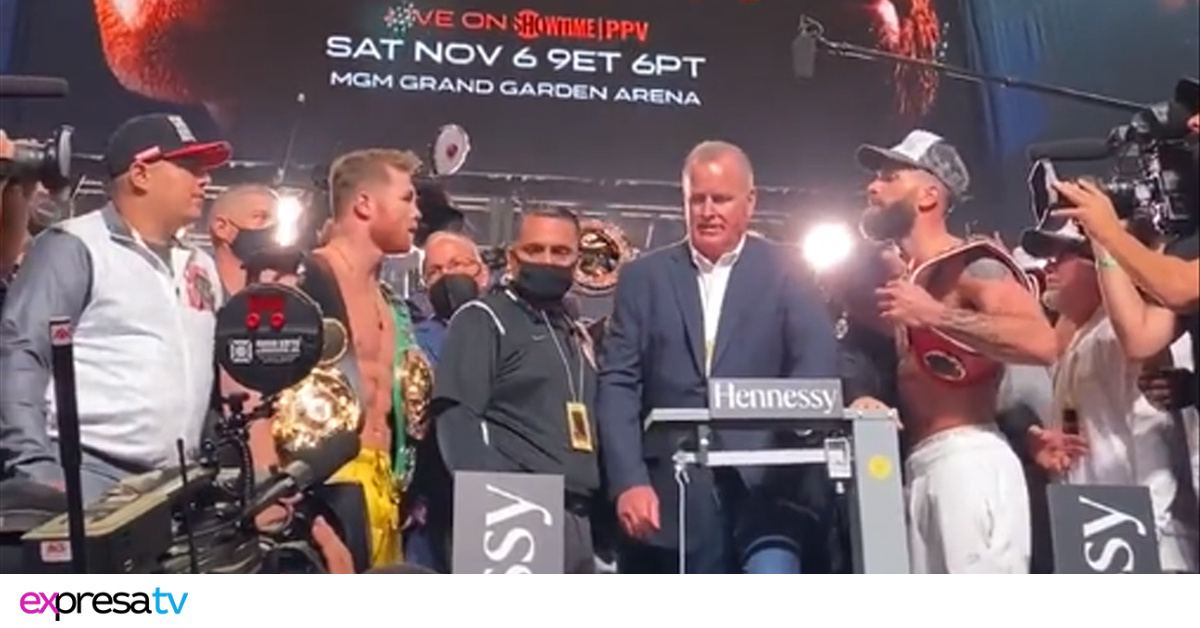 We are back to one of the most anticipated fights for the closing of 2021, after the controversy caused at the weigh-in ceremony when 'Canelo' pushed his opponent, heating up the fight long before the fight.
10:54 PM7 months ago

Please stay here and do not miss a detail of the match Saul Alvarez vs Caleb Plant live updates and commentaries of VAVEL.
10:49 PM7 months ago

How to watch Saul Alvarez vs Caleb Plant Live Stream on TV and Online?

If you want to watch the fight Saul Alvarez vs Caleb Plant live on TV, your options is: Azteca.

If you want to directly stream it: Streaming services and Azteca app.

What time is Saul Alvarez vs Caleb Plant match for BOXING 2021}?

This is the start time of the fight Saul Alvarez vs Caleb Plant of 6th November 2021 in several countries:

Everything you need to know

The weigh-in will take place the day before the fight. On the day of the show among the most outstanding previous fights are Anthony Direll vs Marcos Hernandez, Rey Vargas vs Leonardo Baez and Elvis Rodriguez vs Juan Pablo 'Pivi' Romero.
The fight will take place at The MGM Grand Garden Arena is an arena located inside the MGM Grand Las Vegas located in Paradise, Nevada, United States. The arena opened in 1993 and has a capacity to hold up to 16 800 people. The Arena has been used for both concerts and sporting events, with pugilism being one of the most constant. 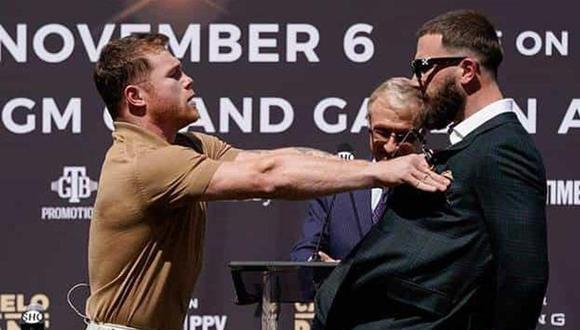 The American fighter will receive a minimum of US$10 million, while the Mexican will get four times that amount.
10:29 PM7 months ago

On October 6, the press conference where the boxers were introduced took a turn for the worse when Saul Alvarez ended up pushing his opponent, forcing the intervention of each boxer's team to avoid a fight on the spot. According to some statements made by the Mexican fighter, Plant would have launched insults during the presentation that bothered 'Canelo': "I never did these things, but this man referred to my mother in an insulting way. I understand that sometimes things are said for promotion, but there are some issues that are very personal, like messing with one's mother and then I reacted very badly," said Alvarez.
10:24 PM7 months ago

On the opponent's side, Caleb Plant has won four defenses in his career, two by knockout, the last six fights ended in decisions, and he has 21 wins, all 12 of which came before the final bell. Plant last fought on January 3 in L.A. against Caleb Truax.
10:19 PM7 months ago

'Canelo' will face the seventh undefeated champion of his career. The last defeat for the Mexican was against Floyd Mayweather Jr, when he lost by decision in 2013, since then Saul Alvarez has won each of his last five fights when contesting titles. Since 2013 he has won 14 of his 15 fights, 7 by KO. He is the fourth Mexican to win a world title in four divisions. Alvarez's last fight was on May 8 in Miami, when he defeated Billy Joe Saunders.
10:14 PM7 months ago

What do we know about this expected fight?

Saul 'Canelo' Alvarez and Caleb Plant will face each other for the unification of the WBO, WBA, WBC and IBF Super Middleweight titles. This fight will define the seventh champion in the 4-belt era, no fighter has ever won the 168-pound title.
The winner of this fight will win the title of undisputed 'Champion', a term that, reviewing the definition in the main bodies of male boxing, there are only six champions at the moment. Before the proliferation of bodies in boxing, there were lone champions, with all the titles in a single division.
10:09 PM7 months ago