The Orlando Magic had been seeking a shot blocking stretch-4, and it traded for one of the best in acquiring Serge Ibaka from the Oklahoma City Thunder. The Magic dealt promising 2-guard Victor Oladipo, the rights to No. 11 pick Domantas Sabonis and the non-guaranteed contract of Ersan Ilyasova. Orlando adds a much-needed rim protector, and the Thunder gain a legitimate No. 3 option within its offense, which was often deficient outside of its start tandem of Russell Westbrook and Kevin Durant.

To be clear, this move helps both teams. But is the Magic who may be altering their starting lineup the most, and by consequence, the team will require time to develop chemistry. GM Rob Hennigan got just what he wanted, one of the best help-side defenders in the NBA and a player whose leadership is sorely needed on one of the NBA's youngest rosters.

Orlando decided to deal its No. 11 pick in sending Domantas Sabonis to the Thunder, but the Magic really needed more immediate help than what the draft could provide. Some may feel giving up Oladipo is a bit much for Ibaka, but the deal shows the inherent value in shot-blocking big men. They are more expensive than dime-a-dozen guards. The Magic can easily replace Oladipo's production through Evan Fournier, but Ibaka adds something the Magic did not have. Blocking shots is not a novelty. The Magic need to protect the rim far better, and that makes Ibaka the perfect addition.

This move dramatically improves Orlando on paper, but looking at a depth chart poses more questions than it does answers. First-year coach Frank Vogel has a variety of starting options in front of him, and how things are handled could affect the outcome of Aaron Gordon's emergence. He is the one player Orlando must find time for, but he and Ibaka both happen to best at the 4-spot.

What Does this mean to the Magic's starting options?

The Magic now have a few options to tinker with its new-found frontcourt depth. But that does not mean the pieces fit together seamlessly. Orlando most certainly will start Serge Ibaka. But the difficulty comes in determining how to get forward Aaron Gordon max playing time while still utilizing incumbent starting center Nikola Vucevic. 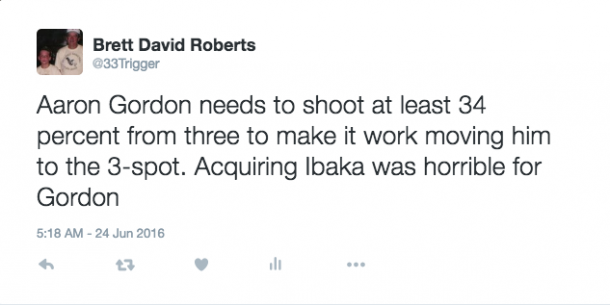 The issue is that Gordon is not really a small forward. If the Magic went big with a starting frontcourt of Gordon, Ibaka and Vucevic, Orlando would sacrifice shooting in a big way. Gordon barely hit 30 percent from behind the arc, and he can struggle at times with defensive rotations. Many are wondering how the Magic can create sufficient spacing.

Trading Channing Frye made sense, but Orlando does not gain a knockdown shooter in Ibaka and Frye is one of the best offensive stretch-4s in the Association.

Ibaka can hit the three, but Orlando only has two premier shooters on its roster currently, Evan Fournier and Mario Hezonja. Hezonja is not ready yet, and Fournier is going to shoulder a heavy load in Orlando's offense. It would be unsurprising to see the Magic sign either Luol Deng or another veteran forward before the offseason is over. The Magic will likely give Hezonja a fair share of the minutes at the 3, but Orlando needs some experience if it is to make waves in the postseason.

The Magic are a bit small at the 3-spot because Gordon cannot really thrive there. Orlando could thrust Hezonja into the fire, but it seems the only way to balance the roster is to sign a shooter. The Magic could pursue the matter via trade, perhaps aiming at a guy like Milwaukee Bucks swingman Khris Middleton.

Shooters do not come cheap, though. 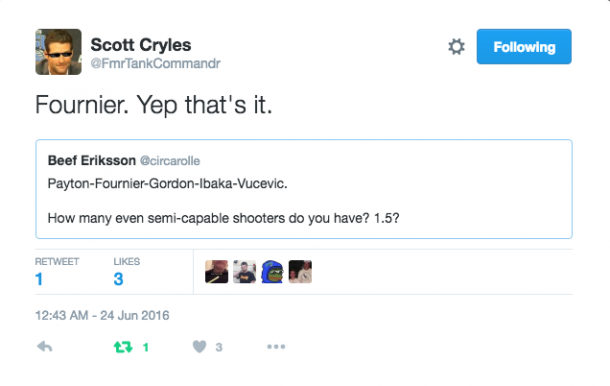 Ibaka functions most usefully in covering for the slow-footed Vucevic. Nikola Vucevic has been continually lackadaisical in covering penetration, whereas Ibaka excels at it. Will the Magic start Ibaka at his natural 4-spot and Vucevic at the 5, or will the Magic start Gordon and bring Vucevic off the bench as a sixth man. It is a nice problem for the Magic to suddenly have several looks it can throw at opposing teams.

It does hurt losing Oladipo, but it signals the Magic’s commitment to re-signing restricted free agent sharpshooter Evan Fournier. Fournier will likely command $12 million per season or more, but the Magic are in a favorable position this summer. The Magic have room to sign two max contracts, and that could come in handy if the bidding gets high for Fournier. The Magic also own his Bird rights, meaning the Magic could go over the cap to re-sign Fournier. Orlando needs the Frenchman to be its starting shooting guard.

How does Ibaka affect Orlando's prospects?

There is also the issue of how 2015 draft pick Mario Hezonja fits in. He had a nice stretch at the end of the season, starting a handful of games, and he showed the ability to play three positions. The Magic know his quickly released jump shot is one of the best on the team. He is an underrated passer. Will Hezonja earn the nod as the starting small forward? It is wide open.

Orlando realistically has three or four different starting lineups that could all work. It will be up to first-year coach Frank Vogel to shape this roster into an actual team. The Magic have languished the last four seasons, cycling through three coaches without any real sustained success. The Magic had such a strong December that coach Scott Skiles won Coach of the Month, but the Magic fell off and suffered a one-win January as Skiles became increasingly frustrated with his personnel.

Vogel and Ibaka represent chances at a new start, at a potential team defense which could prove among the best in the league. But right now it is a nebulous collection of talent in need of some finishing touches through free agency. The Magic had the backcourt depth to bear parting with Oladipo, and Ibaka fills a need the Magic have had since Dwight Howard departed four years ago. The rim must be protected, and even the best perimeter defense seem to require an anchor in the paint.

Ibaka can be just that, and though the Magic gave up a lot to obtain him, he will rectify pressing issues and give Vogel the necessary rim protection to craft a top defense. As to whether Gordon or Vucevic gets the starting nod is virtually unknowable now.

But the Magic at long last have some real options with the addition of one of the league’s premier shot swatters.

LaMelo Ball Wins Rookie of The Year 5 days ago

Tom Thibodeau Wins Coach of the Year 14 days ago