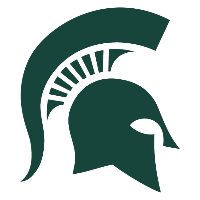 Coming off two losses in their last three contests, including a double-overtime loss to the Maryland Terrapins in their Big Ten opener, Monday night’s contest was a must-win game for the Michigan State Spartans.

Taking on the Indiana Hoosiers, who entered the game with a 1 – 0 record in conference play, would be another stiff test for the Spartans.

With the way Michigan State played in the game, it was hard to imagine that this team was only 9 – 5 entering the contest, and had a loss to Texas Southern on their resume.

The Michigan State Spartans led for the majority of the game, and trounced the Indiana Hoosiers, 70 – 50, to score their first Big Ten win of the season.

Indiana took a quick 2 – 1 lead, under two minutes in, thanks to a lay-up by Emmit Holt. It was still very early in the game, but that would turn out to be the only time that Indiana would lead in the game.

Gavin Schilling would make 1-of-2 costless throws from the line following Holt’s lay-up, and that was also the last time the game would be tied (2 – 2).

From there, it was all Sparty.

Indiana went ice cold from the field over the next five-plus minutes, allowing the Spartans to stretch the lead to 11, at 13 – 2. Bryn Forbes made a three-pointer, and Matt Costello capped off the Spartans’ run with a two-point jumper.

It was not until the 12:46 mark that Indiana would find the scoreboard again, thanks to a lay-up from Yogi Ferrell.

Michigan State would continue their push, stretching the lead to 15 with 9:29 left to play in the first half, thanks to a jumper from Marvin Clark and a dunk by Schilling on consecutive possessions.

Indiana would cut the lead to single-digits after made costless throws from Collin Hartman and Ferrell. However, that was as close as the Hoosiers would get in the first half, at 19 - 11.

Michigan State closed the first half on a 15 – 6 run, thanks to six points from Branden Dawson and five points from Denzel Valentine. The Spartans took a 36 – 17 lead into the break in what was arguably the best half of basketball the Spartans have played this season.

The second half was more of the same, as Sparty continued to roll right along.

Michigan State opened the season on a 14 – 3 run to stretch their lead to 30 points, at 50 – 20, with 13:13 to play. Valentine scored five consecutive points, and Forbes capped off the Spartans’ strong run to start the second half with a jumper of his own.

The Spartan fans were rocking inside the Breslin Center, and there was no way that the Hoosiers were going to come back from the deficit. The players were feeding off of the crowd’s energy, and the Spartans looked like a legitimate contender in the Big Ten, for at least one game.

Indiana would continue to fight, despite the big deficit, and were able to trim the lead down to 19 points on a couple occasions. James Blackmon, Jr made his only field goal of the game, at the 7:41 mark, to trim the Spartans’ lead to 57 – 38.

From there, both teams would trade baskets until Ferrell made a three-pointer to bring Indiana within 16 points, at 3:14. This was the closest the Hoosiers had been to the Spartans since the 3:01 mark of the first half. It was also as close as they’d get from there on out.

The Spartans put the hammer down on the Hoosiers the entire game, and put the clamp down on the defensive end once they were able to grab a sizeable lead. Down the stretch, strong costless throw shooting allowed the Spartans to keep a wide margin, and allowed them to put their bench players in towards the end of the game and cruise to victory.

A Robert Johnson three-pointer at the end of the game cut the deficit to 20, but it was too little, much too late.

The Michigan State Spartans finally claimed a signature win in 2014-15, knocking off the Indiana Hoosiers by a final score of 70 – 50.

The Spartans had three players score in double-figures, led by Denzel Valentine who scored a team-high 15 points to go along with 6 rebounds and 4 assists. Branden Dawson recorded a double-double of 14 points and 13 rebounds in in the win. Travis Trice was 1-of-8 from the field, and only recorded 6 points. Trice added 7 assists, in 24 minutes of action, to help guide the Spartans off the bench.

Freshman guard Lourawls Nairn started in place of Trice on Monday night, and had his first solid performance for the green and white. In 26 minutes of floor time, Nairn recorded 7 points, 2 assists, and 0 turnovers in the victory.

One area of concern for the Spartans moving forward continues to be their costless throw shooting. Against Indiana, the Spartans were a dismal 9-of-16 (56.3%) from the charity stripe. The team is constantly leaving costless points on the court, and will need to improve from the line if they want to be seen as a viable contender in the conference this season.

For Indiana, Yogi Ferrell led the way for the Hoosiers, scoring a game-high 17 points in a losing effort. He was the only Indiana player to score in double-figures on Monday night.

Robert Johnson added 9 points and 6 rebounds, while freshman star James Blackmon, Jr was held to just 8 points on 1-of-14 shooting from the floor. He was 6-of-6 from the costless throw line.