The IMSA WeatherTech SportsCar Championship season-opening Rolex 24 started in Saturday afternoon at Daytona International Speedway and is now in its final six hours. The recap of the first eight hours can be found on VAVEL.

Last year's winner, the No. 02 Ford Chip Ganassi Racing Riley DP had started the race well, being one of the front-runners of the first eight hours. However, the defending winners' race took a major blow in the ninth hour; the team reported the No. 02 Riley DP's brake pedal had gone to the floor and the team had to change the brake system. Once the car was able to rejoin the race, it was 11 laps down.

The No. 60 Ligier JS P2 Honda of Michael Shank Racing continued as the quickest car on the track and was leading until the tenth hour. Then the race took a dramatic turn as the Honda engine of the Ligier failed, ending the leading car's race.

The number of Prototype cars on the lead lap had reduced to six: the two Corvette DPs of Action Express Racing, the sole Corvette DPs of Wayne Taylor Racing and VisitFlorida Racing, the No. 01 Riley DP of Ford Chip Ganassi Racing, and the Ligier-Honda of Tequila Patrón Extreme Speed Motorsports. The No. 55 Mazda Motorsports entry that was leading the race during the fifth hour caught fire in the 12th hour and had to retire from the race. The fire was caused by a valve train issue. The pole-sitting BR01-Nissan of SMP Racing has suffered from mechanical issues and is over 100 laps from lead, yet continues running.

During the 15th hour, the No. 31 Action Express Corvette DP caught fire while being refueled. The fire was extinguished and the car could continue the race, initially remaining on the lead lap but getting lapped during the following stint.

By the 18-hour mark, the No. 31 Action Express Corvette DP had unlapped itself and was again on the lead lap. A caution period collected the field and the top six had minimal gaps. The No. 5 Action Express Corvette DP didn't pit during the caution period, allowing Christian Fittipaldi to take the lead. Immediately behind Fittipaldi was Pipo Derani in the Patrón ESM Ligier-Honda and Jordan Taylor in the Wayne Taylor Racing Corvette DP. The entire top six was within seven seconds. 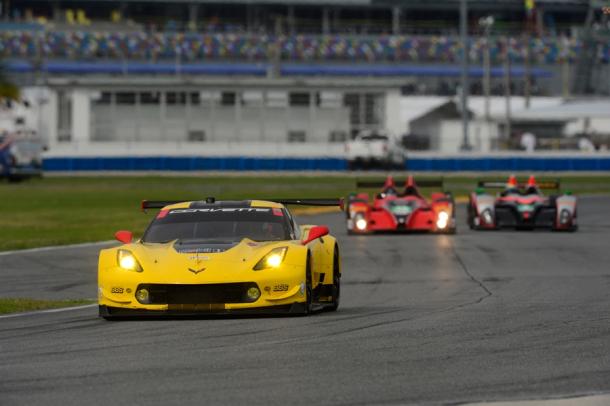 Apart from Ford Chip Ganassi Racing's brand-new Ford GTs that fell early out of the lead battle due to mechanical issues, the GT Le Mans class has continued very competitive in the night hours with each of BMW, Corvette, Ferrari, and Porsche visiting in the lead.

While the Ford GTs are aiming to finish the race despite all the issues, only one of the 11 cars in the GTLM field has officially retired from the race. Lucas Luhr of the No. 100 BMW Team RLL entry crashed heavily at Turn 1 after a mechanical failure in the new-for-2016 BMW M6 GTLM racer, fortunately surviving uninjured. A suspected cause for the crash was a brake disc failure.

At the 18-hour mark, seven GTLM cars were on the lead lap, with small gaps following the caution period. Antonio Garcia was leading in the No. 4 Corvette Racing C7.R, closely followed by Frédéric Makowiecki in the No. 912 Porsche North America 911 RSR and Tommy Milner in the No. 3 Corvette C7.R. The best Ferrari was the fourth-placed No. 68 Scuderia Corsa 488 GTE and the best BMW was the fifth-placed No. 25 BMW Team RLL M6 GTLM.

Following IMSA's adoption of the GT3 rules for the GT Daytona class, five Lamborghini Huracán GT3s were on the start list of the Rolex 24. In the 11th hour, two Lamborghinis were leading the GTD class; Paul Miller Racing in first place and Change Racing in second place. Then Justin Marks of the Change Racing Lamborghini attempted a risky dive on the leading Bryce Miller of Paul Miller Racing, leading to a crash when approaching Turn 1, narrowly missing the Mazda Prototype that was exiting the pits.

At the 18-hour mark, the No. 44 Magnus Racing Audi was leading, yet the top six was within just few seconds from the class leader.

The No. 85 JDC-Miller Motorsports entry has dominated the Prototype Challenge class where everybody has had issues; as a result, both GTLM and GTD class cars are ahead of the PC class cars in the standings. The No. 85 entry was leading the PC class by 18 laps before its driver Kenton Koch crashed into a tire barrier and damaged its front. The car was still able to rejoin in lead after reparations.

At the 18-hour mark, the No. 86 JDC-Miller Motorsports entry had a lead of nine laps to the second-placed No. 26 BAR1 Motorsports PC car.

The Rolex 24 At Daytona continues until 2:40 pm Eastern Time on Sunday.