Sky Blue FC meet the Washington Spirit at Yurack Field on Sunday night. Both sides have a 1-0-1 record which should make for an intriguing match up.

The Sky Blue FC is coming off an historic upset last week, defeating the Seattle Reign 2-1.  New Head Coach Christy Holly's squad now returns home to face the dangerous Washington Spirit and former head coach Jim Gabarra. “We are very excited to get the team out on Yurcak Field so we can show our home support what we are capable of doing,” said Holly. “We will look to carry forward the momentum that we created in Seattle, as well as build upon the foundation that we established there. We hope to see everyone come out on Sunday because it will definitely be an entertaining game.”

While Sunday night's match does promise to be entertaining, Sky Blue must find a way of shutting down the lethal Crystal Dunn. The last time these two played, Dunn speed and playmaking skill was too much for the Sky Blue defense to handle, as she scored a pair of goals in a 3-1 win. The New Jersey side must also deal with the emotion of facing Gabarra, who coached the team for five years.

“Sky Blue is coming off a well-deserved away win,” said Gabarra about his former club. “It certainly will be a difficult match for us. We need to set a high standard for our first away match of the season.” 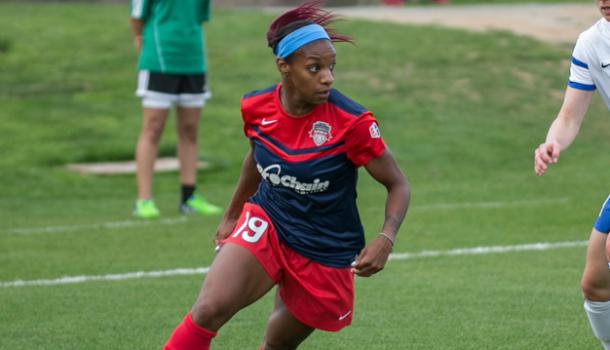 The Spirit are coming off a 1-0 victory over the Boston Breakers as Joanna Lohman scored the game's only goal with an assist from Dunn. With the crafty Ali Krieger patrolling the backline, the Spirit pose a dangerous test for the new look Sky Blue.

Last week, Holly's squad included some new faces who had never played a minute of the NWSL. Former Sky Blue member Tasha Kai returns, but she had left the squad before it joined the NWSL. She brings much needed goal scoring and toughness to the front. Kai scored the opening goal in last week's match against Seattle and she has the potential to match Dunn goal for goal.

Another new face is midfielder Kelly Conheeney, who is one of the feel good stories of the young season. Conheeney joined the team as a tryout player and played her way into the starting lineup. She scored the game winner against Seattle.

For the Spirit, the key will be getting Dunn the ball early and often. Fellow forward Fransisca Ordega can also be lethal when given space to create. Former forward and now defender Maya Hayes of the Sky Blue has the speed to keep up with Dunn and Ordega and she will need to play a big role in the match. The backline of Hayes, Kelley O'Hara and Christie Rampone will need to form a wall for young goalie Caroline Stanley. One key for the Spirit is Gabarra, who, despite all of New Jersey's changes, still knows his former squad well enough to pick out key weaknesses.

It's going to be a tough, entertaining match. Dunn & co. are one of the better squads in the league. Kai can provide enough offense to keep it close.