On Wednesday night in a multicolored Soldier Field, Colombia's Copa America Centenario dream ended as they were beaten 2-0 by Chile on goals from Charles Aranguiz and Jose Pedro Fuenzalida. Los Cafeteros had entered this match with hopes of lifting a first Copa America trophy in 15 years but walked away empty handed.

Though he conceded two goals on the evening, Ospina had a terrific game. He did well when balls made their way into his box and had a brilliant save on a bullet header from Erick Pulgar to keep his side in the match in the second half. Did a nice job of controlling his box. Ospina was probably Colombia's best player on the night.

Was absolutely torched by Jose Pedro Fuenzalida, especially in the first half. The Chile wing back was one of the best players on the field and just had his way all night. Murillo could not deal with him.

Falls into the same boat as Zapata. There were moments where he made brilliant blocks and interceptions, one to cut out a lovely pass from Alexis Sanchez, but should have done better with both Chile goals.

Did a nice job of getting down the right wing, and added a dimension to the Colombian attack. Yet, Jean Beausejour was one of the men of the match, and Arias did nowhere near enough to keep him quiet. Poor match from the PSV Eindhoven man.

Replaced by Marlos Moreno at the half, Cardona had an afternoon to forget. He struggled to impose himself on the match and found it difficult to string passes together. Will be disappointed.

Though he had a decent opening 45 minutes, he ended any hope his side had on a comeback when he was sent off early in the second half. Colombia looked like the more dangerous side after the break and was beginning to look like getting back into the game. Then, Sanchez picked up a needless second yellow card. It was just poor.

That I had to double check my team sheet to be sure he'd played says enough about his performance. Utterly anonymous, failed to help Colombia gain any semblance of control over the midfield, and just had an all-around bad match.

The captain didn't do enough when it mattered most. Rodriguez looked to single-handedly carry his side on at points in the second half but just seemed to be trying to do too much. Didn't do enough with the half chances he had in the opening period. Should have been sent off for a terrible tackle late on. 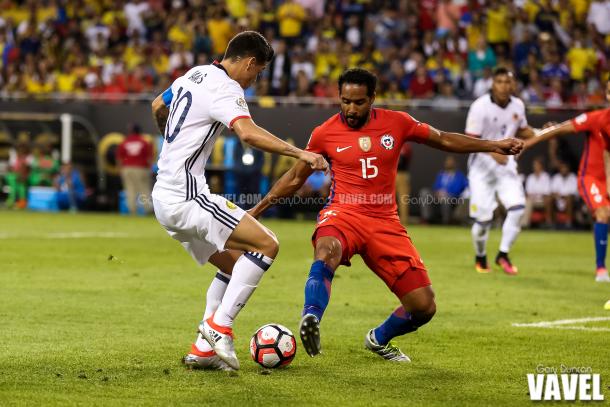 Found service difficult to come by, but gave the ball away poorly on the occasions when it came to him. Probably should have been subbed off, with Carlos Bacca, who has had a poor tournament, waiting in the wings.

Colombia's most dangerous attacker, he probably should have won a penalty early in the second half just before Sanchez got his second yellow. Did a good job of winning fouls and troubling Chile's defense all night long.

The 19-year-old was introduced after we re-emerged from the weather delay, and showed why he is a hugely sought after commodity. Looked dangerous when on the ball, and played with a fearlessness well beyond his years. A good performance.

Didn't play long enough to pick up a rating. Probably should have been subbed on earlier, so ineffective was Martinez.