At Yurcak Field in Piscataway New Jersey last night, a nearly packed crowd saw a match that was loaded with fireworks, controversy, and one potentially damaging injury for the Sky Blue.

With three points separating the visiting Chicago Red Stars and the Sky Blue for the fourth playoff spot, both teams came out aggressively in what was viewed as the match of the weekend. However, in the end, the Red Stars came out on top 3-1 and severely damaged the Sky Blue's playoff hopes.

The opening few minutes saw much back and forth action, as both squads probed each other's attack for weaknesses, and saw both goalies Caroline Stanley for the Sky Blue and Alyssa Naeher for Chicago having to make key saves.

Eventually, in the 31st minute, it was the Red Stars who would score the game's first tally when forward Stephanie McCaffrey struck a ball that looked more like a cross at first but sailed over Stanley's head, striking the post and redirecting into the net.

The match's first controversy occurred in the 38th minute in an amazing flurry of action in front of the Chicago net. First, Sky Blue midfielder Taylor Lytle sent a shot towards goal, where forward Tasha Kai attempted to gather but rather landed at the feet of the dangerous Sarah Killion. The Sky Blue midfielder then hammered a shot that Naeher was able to deflect, but the attempt then curled towards the line. There to clear it was defender Arin Gilliland inside the net, only to see Killion strike it back towards the goal, but Naeher was then barely able to get a hand on it to keep it clear of the line once again. As the ball bounced around loose in front of the goal, Sky Blue FC forward Sam Kerr was finally able to fire it into the back of the net, but the offside flag went up to nullify the goal. To all those in attendance, the ball had clearly crossed the line not once but twice during the fury of activity, despite the apparent attempts by Naeher to clear it. The offside call was also highly questionable. The goal would have notched the match at 1 and gave the Sky Blue all the momentum. However, the denial seemed to take the wind out of the Sky Blue attack.

Head Coach Christy Holly inserted recently arrived USWNT member Kelley O'Hara in right after the second half began and as a result the Sky Blue came very close to leveling the match again, this time in the 51st minute. Forward Leah Galton raced down the left flank before crossing the ball perfectly for  Kai, who saw her header hit the crossbar and then sailed the rebound high.

Chicago would make them pay for the misfire shortly after, when forward  Christen Press, who is so fast and dangerous on the dribble, took a feed from Vanessa DiBernardo and beat a badly out of position Stanley for an easy goal. Chicago would close out their scoring when Sofia Huerta finished off a redirection from a DiBernardo corner in the 80th minute, making it 3-0. 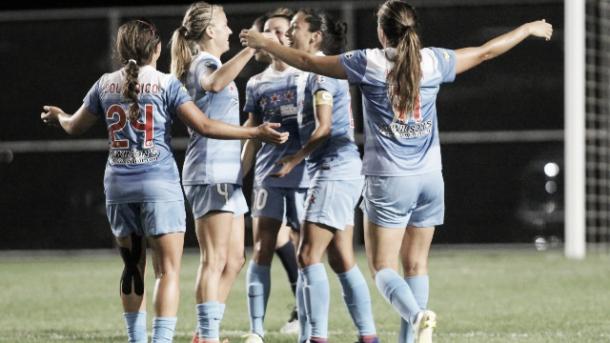 The match's next controversial moment came in extra time when Chicago's Alyssa Mautz made a dirty and unnecessary tackle on O'Hara, sending the crowd into dead silence. O'Hara eventually  was carried off the field right into the locker room. A minute later, Kerr, who played brilliant all night would finally score the first goal for the Sky Blue.

"I told the team we could afford one loss," said Holly. "so this is the loss. It's all on us from here out.Obviously, we are disappointed with the result.When we look back at some of tonight’s defining moments, we will see that we did not win them and that ultimately cost us the outcome of the game. Now, we will dig into the film to find the positives and make sure this result does not define our season.”

When asked about the Mautz tackle, Red Stars coach Rory Dames said it wasn't intentional, saying "that's not who we are." He then said jokingly "well maybe in year one, but not now."

After the match, O'Hara was seen leaving on crutches and wearing a boot.