The North Carolina Courage went to Tacoma hungry for points, not being able to collect a win in their previous three matches.

In the other hand the Reign FC could never obtain a win when facing the Courage and they were about to make history in Memorial Day.

The Reing incorporated two key players. One of them was Jess Fishlock. She was back after winning the Champions League with the Olympique de Lyon, the team that belongs to the D1 League of France. The other was Casey Murphy, the goalkeeper that comes from the Montpellier of France that also belongs to the D1. With Lydia Williams at camp with the Matildas and Michelle Betos picking an injury that sidelined her for the rest of the season last week (Aquilles tendon), Murphy was starting in goal.

The first half was controlled by the Reign, who looked dangerous with Fishlock making the team play, giving key passes and having some good looks. But the fisrt goal came through Bethany Balcer, collecting in this way her second goal of the season. In the minute 13 she stroke the crossbar and the ball went in.

Leah Pruitt could've scored in the 19' after a cross from Lynn Williams, but Murphy was well-placed to stop that back heel.

Darian Jenkins y Beverly Yanez proved to be key for this important win, making good runs, crossing ball through the penalty area and dispossessing the Courage players to hold their attacks. Theresa Nielsen also proved to be key, to stop the combinations between Jaelene Hinkle and McCall Zerboni in the left flank.

Before the end of the first half, Balcer had another great chance to score. A shot from outside the box was saved by Katelyn Rowland but she couldn't catch the ball and it hit her back and almost goes inside the goal. Nonetheless, Merrit Mathias appeared to save it inches before the goal line.

The Courage looked better in the second half. Nonetheless, the team still can't find that final touch that makes them finish their plays.

A mistake from Rowland brought Reign's second goal. The goalkeeper came out of the box to clear a long ball that Abby Erceg had in control and that led to a loose ball that Shea Groom pulled away and fired into the goal in the 86 minute.

Iffeoma Onumonu created another good chance two minutes later, running with the ball on the left flank and passing it to Fishlock, who was inside the box. The Welsh international shot but the ball was blocked by two defenders.

North Carolina kept fighting and they got their reward in the 89'. The Courage had a corner and a header from Erceg ended up in the back of the net.

The game ended after six minutes of stoppage time and Beverly Yanez had to be helped out of the field, injured, while her team endured the pressure from the visitors trying to get a draw. 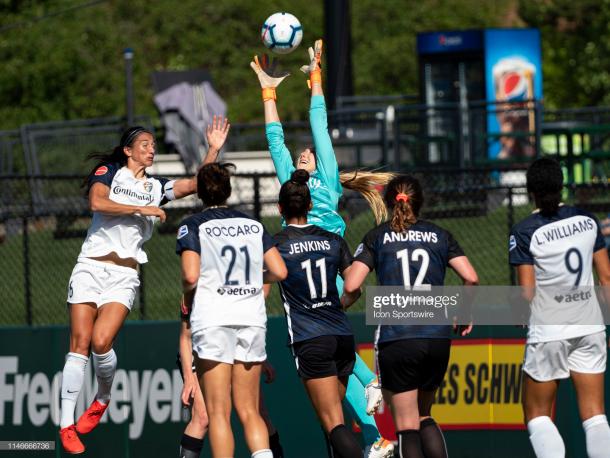 Murphy proved to be key to stop the Courage attacks, showing composure every single time she was called into action. The Reign have always had good keepers in goal and Murphy is no exception to that. Bethany Balcer had a good game again and she looked pretty sharp at the attack. This Reign team looked nothing like their first matches of the season and getting Fishlock back is a great adition to the mix.

In the other hand, the Courage couldn't collect a win for four week now and Lynn Williams dessapeared in the second half. Paul Riley needs someone who can match her speed and be her partner in the final third. The team has good players and they need to startt to get it together and start playing with the players they currently have. Their next game is against the weakest team in the league, Orlando. If they can't collect a win against them is going to be a hard blow for them and their confidence.

After a lengthy search, the NWSL names Lisa Baird as Commissionera year ago