Portland Thorns FC received very bad news in the 24 hours prior to the game: midfielder rookie Gabby Seiler tore her ACL in Friday’s training sessions and will miss the rest of the season. She was killing it and was considered a dark horse by many but a serious contender for Rookie of the Year for Portland fans. Her absence in the midfield threatened to disrupt the midfield continuity for Portland as they hosted the Washington Spirit.

Celeste Boureille and Andressinha are also out due to injury so Portland’s midfield is getting thinner and thinner. Mark Parsons had to change formations and used a 4-2-3-1 for this match with Lindsey Horan and Dagny Brynjarsdóttir as pure midfielders; Hayley Raso, Christine Sinclair and Tobin Heath in front of them and Midge Purce as the only true forward.

Historically, Washington Spirit is a team that always have complicated things for Portland and this match broke that rule. Although it could have been the same story all over again. An early chance for Washington could have complicated things a lot for the hosts. Spirit’s captain Andi Sullivan headed that ball in between three defenders and the sailed it over the bar so the visitors missed that good opportunity.

The Thorns played an excellent first half and they translated it into goals. Hayley Raso took the ball Brynjarsdóttir couldn’t connect with after Christine Sinclair service to the front post. Raso chased down the ball before it went outside the box and finished with a curling ball that left Aubrey Bledsoe without a chance to save it.

Raso had another chance minutes later after a great diagonal pass from Heath and shot with her right foot but Bledsoe made a big save with one hand and denied her the chance.

But Portland’s attack was relentless and before the 20th minute, Heath sent a ball to the first post where Emily Sonnett was standing and score with a little flick. 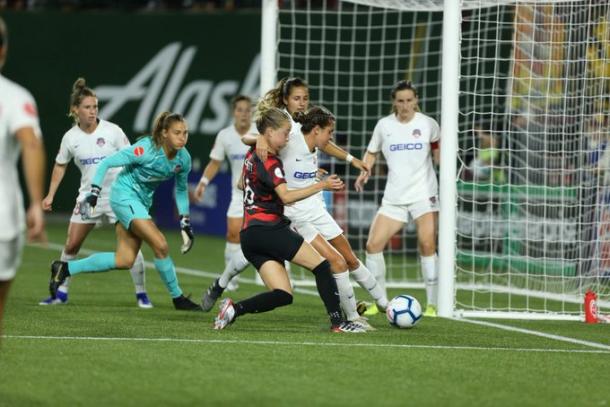 The Thorns defended very well in the first half. They were very compact and minimized opportunities for the Spirit. But couldn’t keep Washington under their feet in the second half. The game got a little more stretched and the visitor’s game started to grow. They had the ball and translated it into good looks in the final third. It is interesting that the Spirit had a better possession percentage in the first half but its forwards couldn’t produce much but coach Richie Burke changed that in the second half.

A rocket fell in the second half

That’s why the first early goal was so important for the Thorns and also the fact that they find their second from a set-piece minutes later. Rose Lavelle has been on fire since she came back from the World Cup and had two great opportunities that Adrianna Franch denied her making two good saves.

Portland captain Christine Sinclair brought the game to 3-0 after a Spirit clearance off of a corner that fell to her. And she finished that opportunity in a calm way, as is always her style.

But Washington answered five minutes later through Andi Sullivan with a true golazo. Rose Lavelle had the ball on the left third end and passed it to Sullivan who was covered by Horan. Nonetheless, the Spirit captain made some space for herself and fired a rocket from outside the box and netted that ball in the top corner.

Good numbers for the Thorns

In this way, Portland maintains its position at the top of the table and a lot of good things came out of this match for Portland. Besides the top of the table, Tobin Heath marked her 25th assist, the first player in NWSL history to achieve that number. Also, Sinclair’s goal was number 8 for her, positioning her second in the table of goalscorers. The team leads the league in goals scored with 36 and are tied for the league’s best goals difference with +14. Also with this win, the Thorns accumulate 9 wins, the most in the league, and they only have 3 losses, the fewest in the NWSL.

A touching moment came in the 35th minute when the 20,895 fans at the stadium started to chant for Gabby Seiler, the player with a 35 in the back of her jersey honoring her for the way she played this season and for all she has done for the team.

But good numbers aside, the Thorns are still trying to find some consistency so they can go and play confidently in this last part of the season. This win helped them a lot with that.