But records aside, the match between the Thorns and the Spirit was a test for both teams. The Spirit, who couldn't get into the playoffs but were close to doing so for the first time since 2016, didn't want to end their unbeaten streak and finished 5th in the 2019 season. Besides that the last time they played the Thorns they lost 3-1 and wanted to be better, this time at Providence Park.

The Thorns, on the other hand, needed to prove to themselves they could perform better than they did in their final four games. The team has been lacking that firepower they usually have in the final third and had scored just one goal in four matches. So this final game against the Spirit, and having already secured the 3rd playoff seed, was the perfect opportunity to play freely and start building toward the playoffs.

And so they did. The Thorns dominated the match from the beginning  and the captain Christine Sinclair almost joined the 50-goal Club (a club where only Sam Kerr and Lynn Williams are, Sinclair has 49 goals so far) when before the 10th minute almost scored. Rookie defender Sam Staab attempted to pass the ball to her keeper with a header but the Canadian forward was behind her and she pounced on the ball but sent it wide of the far post. 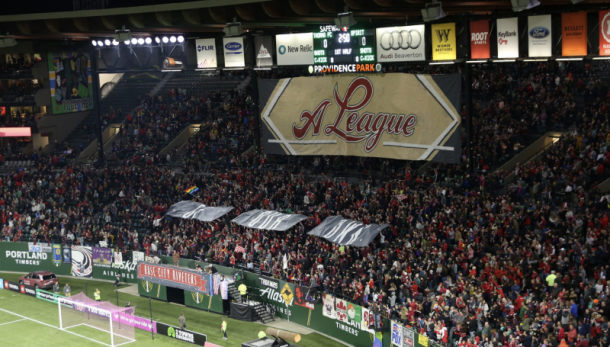 Spirit's keeper, Aubrey Bledsoe, was key to keep match the scoreless. For example, in the 40th minute Christine Sinclair tried to volley a ball after a good service from Meghan Klingenberg that the keeper saved with a dive but she couldn't keep the ball and that gave Lindsey Horan the opportunity to shoot. But Bledsoe reacted quickly, getting up and jumping to block that ball with her legs to denied the Thorns the opportunity to put themselves in front.

Tobin Heath, who was not showing her best football in the last matches, looked better and sent precise balls to the box from the corners and free kicks that her teammates couldn't put away. Sinclair described it as the team lacking "lucky bounces" which was accurate. After 21 attempts from Portland to shot and opened the score none of them could be put away and just 5 of those 21 were on frame.

The second half brought two more clear chances for the home team. In one of them, Heath shot a curling ball to the upper right corner but Bledsoe saved that ball in a spectacular way, sending it over the crossbar.

Midge Purce, who came in as a sub in the second half, had her chance too after a good combination between Sinclair and Heath who passed the ball from the right side of the box, but her shot went wide.

It was a good season for the Spirit

Aubrey Bledose was the player of the match, finishing tied with Sky Blue's keeper with a total of 86 saves and 9 clean sheets. In this way ends up second after Nicole Barnhart (Utah Royals) who has 10.

Sam Staab finished as one of the best rookies in the league, having played all 90 minutes in the 24 season's games. The team accumulated 34 points, just 4 points shy from the playoffs 4th place and finished with more than three times as many points than in the 2018 season when they finished with 11 points.

It can still be a good season for Portland

There are many things we can point out about the Thorns but it's interesting to say that this end of the season reminds us a lot to 2013, the year the team won its first Championship in their inaugural season in the league.

Back in 2013, the team reaped two losses, one draw and one win in its final four matches before hitting the road to face FC Kansas City in the playoffs semifinal, after finishing securing the third seed. There, they won (3-2) in extra time and later played the Western New York Flash (former North Carolina Courage) with goals scored by Tobin Heath and Christine Sinclair.

So 2019 final season and playoffs will be definitely a nod to what happened in 2013. And you know what they say "history repeats itself".

Truth is the playoffs are a (mini) tournament in itself and the Thorns have the golden opportunity to reclaim what they lost in 2018. In their foreseeable future, Chicago looms, a team they had no problem beating in the last years but they cannot lay comfortable in that record because the Red Stars have also things to prove and one of them is to show they can hurt the Thorns when it matters the most.

Undoubtedly, we have two great semifinals where we will be able to see what the future holds for these 4 good teams. And have no doubt that whatever happens will shape next season.