A hard-worked victory for Mexico who qualifies for the  Olympic Men's Soccer Tournament. They will now face Honduras for the CONCACAF Championship.
9:55 PM19 days ago

Mayorga sends a great cross, but Macías is unable to head it in.
9:45 PM19 days ago

Yellow card for an ugly sliding tackle from Bassong.
9:30 PM19 days ago

This was Vásquez play for the 2-0

Pantemis makes a great save to a shot by Macías.
9:15 PM19 days ago

Rodríguez misses a shot with an empty goal.

On a set-pieces place, Vásquez connects with the ball sending to the post.

On the second chance, he pushes it in for the 2-0.

Pantemis makes a terrible clearance. The ball is recovered by Rodríguez who then assists Antuna. He finishes it with a powerful shot.
8:45 PM19 days ago

Alvarado shoots, but his attempt is too high.
8:40 PM19 days ago

Norman fouls Antuna who was looking to going one-on-one against the keeper.

The ref shows him a yellow card.

Córdova had some space to create danger, but he's not patient enough and he ends up shooting wide.
8:30 PM19 days ago

We're underway with the second 45 minutes of the match between Mexico and Canada.
8:20 PM19 days ago

We go to the break with the score unchanged. Mexico has been better, but they've been unable to open up the scoreboard.
8:15 PM19 days ago

A confrontation between Buchanan and Loroña near the corner kick. Both men see a yellow card after their mild scuffle.
8:10 PM19 days ago

Brault-Guillard sees the yellow card after numerous fouls on Córdova.
8:05 PM19 days ago

First shot on target from Canada courtesy of Buchanan. Jurado stops it with no trouble.
8:00 PM19 days ago

Vega tries his luck from a long distance, but Pantemis catches the ball easily.
7:55 PM19 days ago

No major chances in the last few minutes. Despite having possession, Mexico is unable to worry Pantemis and his defense.
7:50 PM19 days ago

Mexico argues for a penalty. Norman apparently pulled on Córdova's arm, but the ref says play on!
7:45 PM19 days ago

Esquivel is having some trouble in midfield. He's had to commit a series of fouls to stop Canada from progressing.
7:40 PM19 days ago

Mexico recovers the ball in Canada's own half but is unable to capitalize on the chance.

Córdova's pass left Antuna in scoring position, but the right winger was unable to finish it.

Header by Esquivel that goes off-target.
7:30 PM19 days ago

Córdova dribbles his way inside the box. He tries to shoot, but Pantemis blocks the ball.
7:25 PM19 days ago

Mexico continues having the ball and now uses the right side to try to open up the scoreboard.

Antuna is currently the man with the most time with the ball during the attacking phase.

Through ball for Alvarado who hits to the near post. Pantemis deflects away using his foot.

Canada is making its first efforts to attack. They rely heavily on the right side and look to open up spaces for Buchanan.
7:10 PM19 days ago

Tons of possession for Mexico in the starting minutes. Canada forms a line of 5 defenders when the opponent has the ball in an attempt to close down spaces.
7:05 PM19 days ago

We're underway with the match between Mexico and Canada!

High stakes: The winner will go to Tokyo!

A few minutes for the start of the match!

The National Anthems of Canada and Mexico play during the protocolary ceremony ahead of the match.

We're instants away from kick-off!

All set for the start of the match!

Both teams have begun making their way out of the locker rooms and onto the field for the start of the match.
6:50 PM19 days ago

We currently have a temperature of 86º F in Guadalajara.

Both teams will need to keep it in mind as the game will demand intensity and physicality. Hydration will be crucial.

Both Canada and Mexico are finishing their pre-match exercises.

They will now go back to their locker rooms for the final message from the coaches. 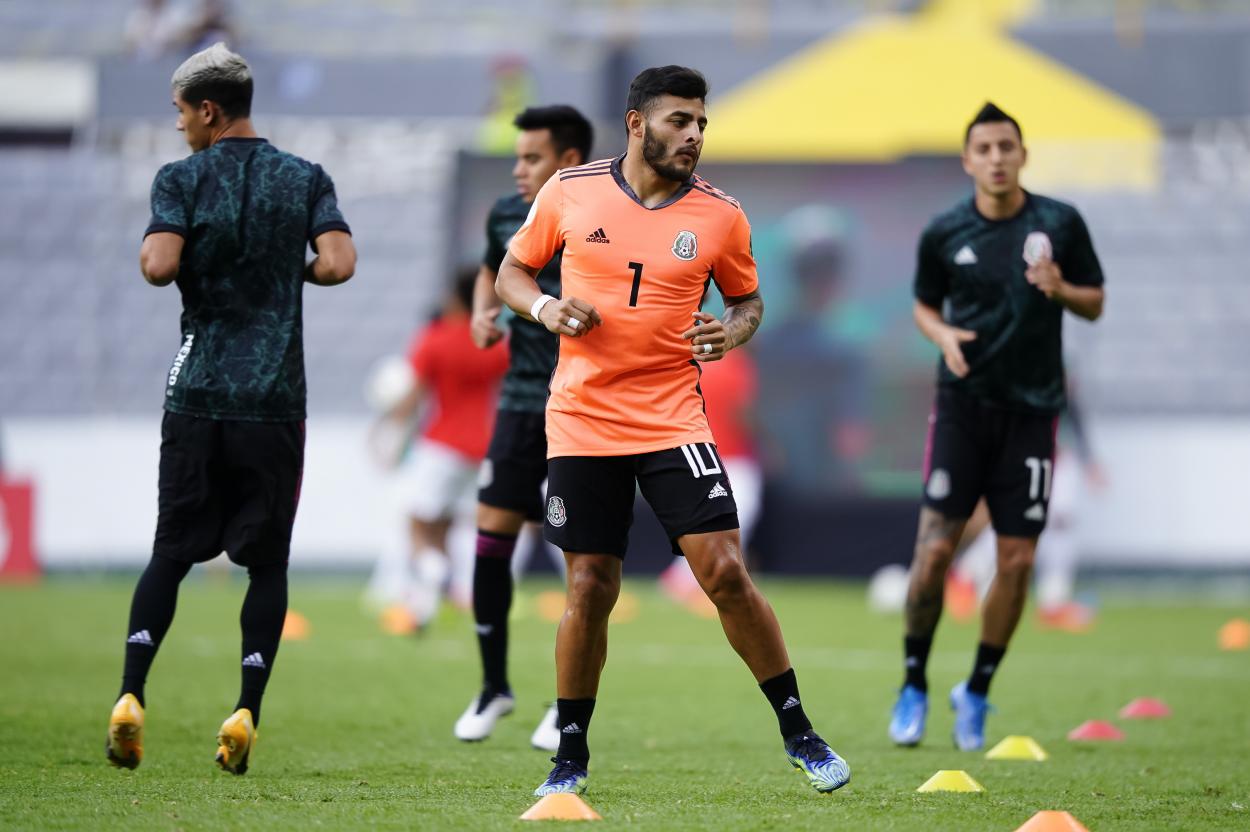 Still a final to go

Despite this being the most important match in the tournament since it decides who advances to the Olympic Tournament, the winner will have to face Honduras to crown CONCACAF's U-23 champion.
6:35 PM19 days ago

Support from the Senior Team!

The Canadian Senior National Team sent a video wishing the best of luck to their U23 counterpart for this important match against Mexico.

The U23 Mexico National Team has arrived at Estadio Jalisco. They will begin their warm-up for this crucial match in a few minutes. 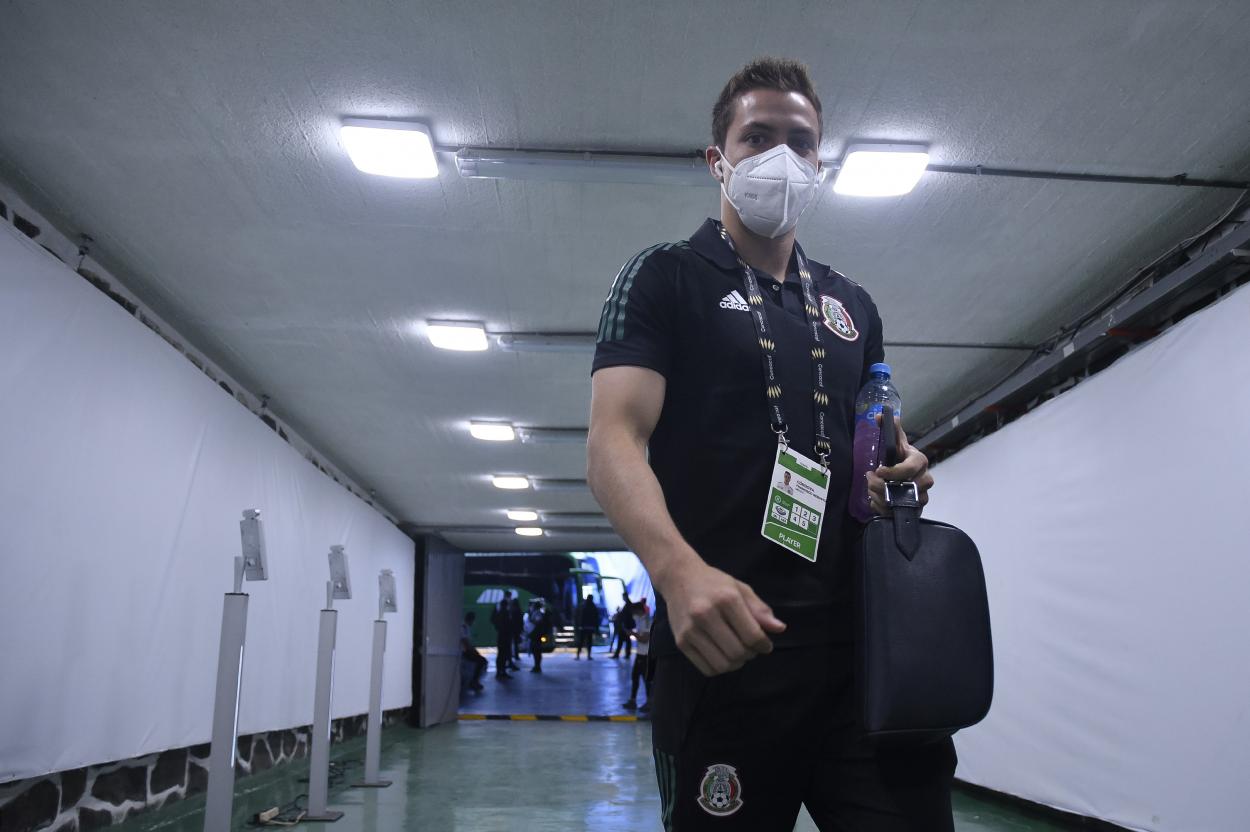 CONCACAF released a press statement earlier today informing that no new positive COVID-19 cases came up after this last round of testing.

Canada and Mexico are all set for this match.

The line-ups for both sides are ready! 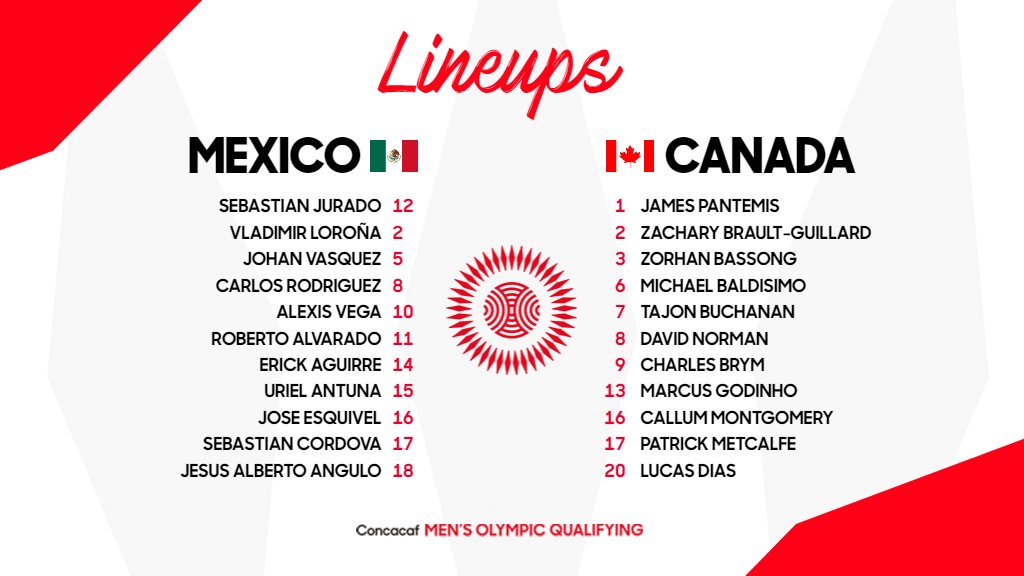 With a 2-1 victory over the USA, Honduras qualifies for the Olympic Tournament. This will be their 4th consecutive appearance.
6:00 PM19 days ago

We're ready to bring you all the action from the match between Mexico and Canada.

Kick-off is an hour away. Don't go anywhere; line-ups are coming soon!

Do not miss a detail of the match with the live updates and commentaries of VAVEL. Follow along with us all the details, commentaries, analysis, and lineups for this Mexico vs Canada match.
5:50 PM19 days ago

After suffering an injury in the game against the United States, the Mexican starting goalkeeper will be unavailable for the match against Canada.

The keeper who plays for Necaxa in Liga MX will be replaced by Sebastian Jurado. 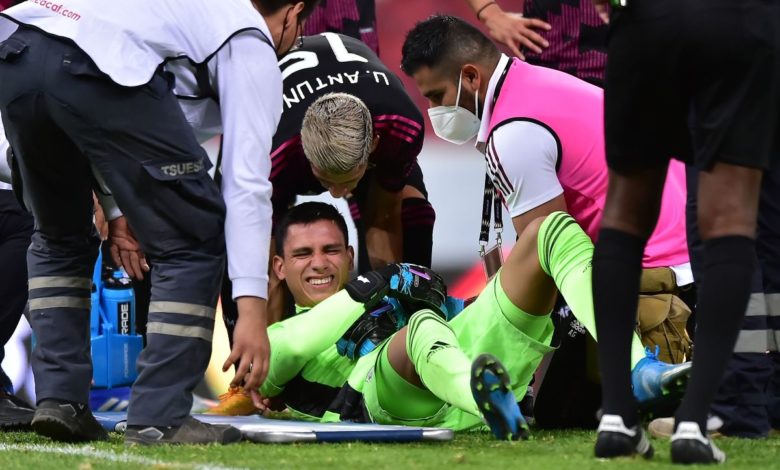 How to watch Mexico vs Canada Live TV and Stream

If you want to watch the game on TV, your options are TUDN and Fox Sports 1.

If you want to directly stream it: FoxSports.com and TUDN.com

Canada looking for a historic win

With the disadvantage of being on Mexican soil, Canada will attempt to get a historic result for them. A win today would mean the first appearance for a Canadian Men's Team at the Olympics.

They had a difficult group stage in which they only managed to best El Salvador (2-1). Their other two games ended in draws against Haiti (0-0) and Honduras (1-1). 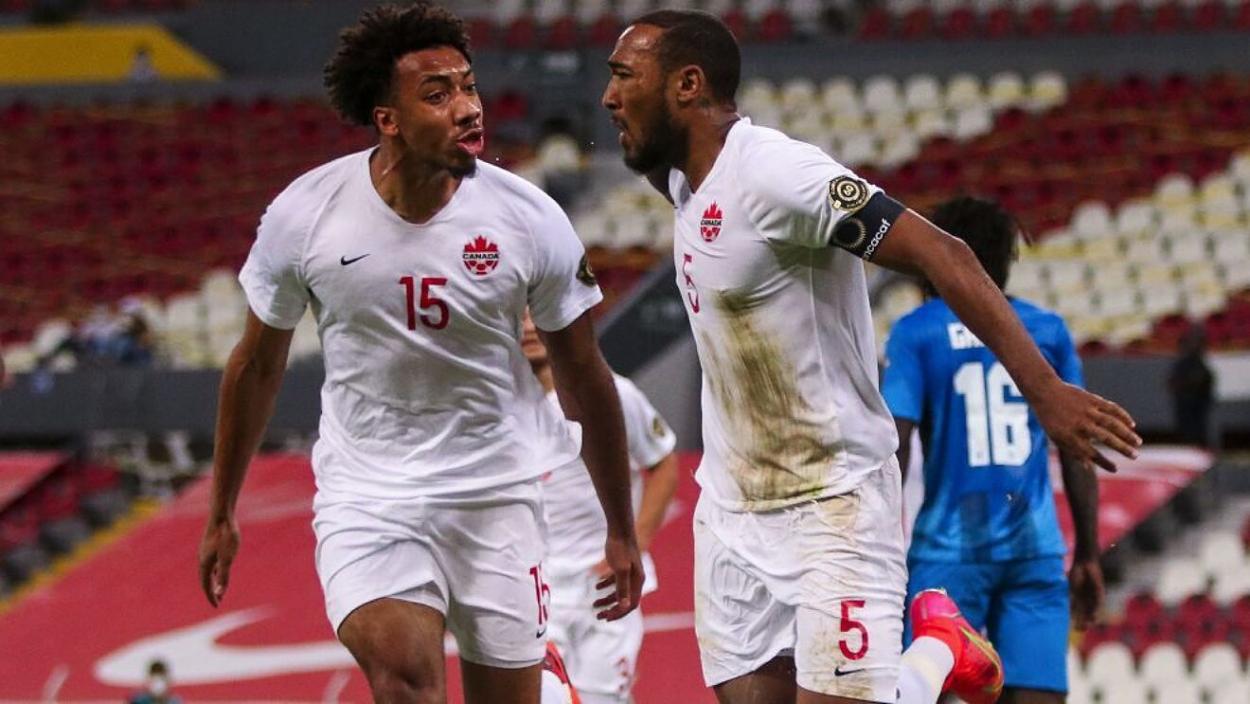 Mexico is the favorite for this match

The home team, Mexico, has been labeled as the odds-on favorite for this huge implications match.

Can they continue the great form and advance to the Olympic Tournament? 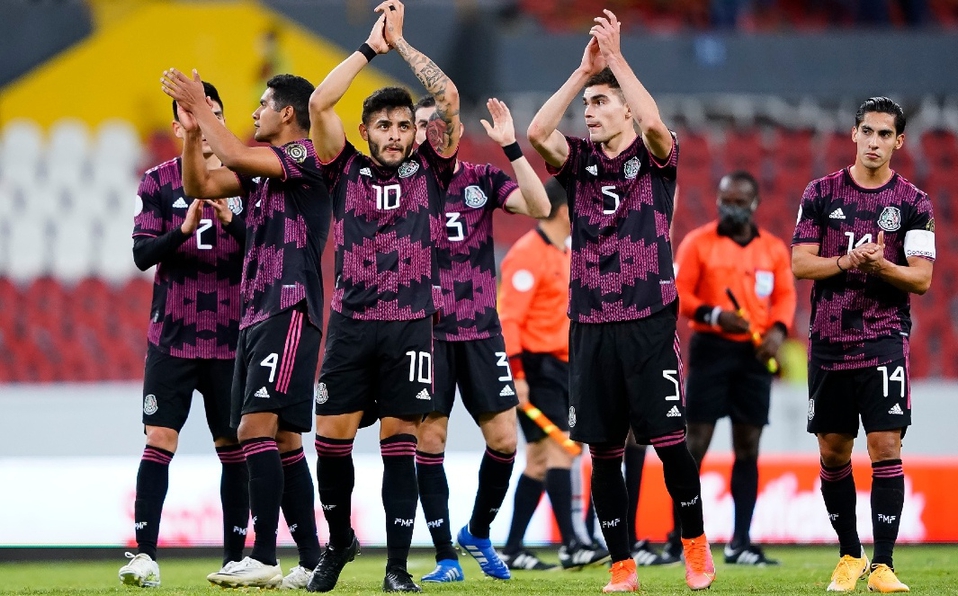 The winner of tonight's match will one of CONCACAF's two qualified teams for the 2020 Olympic Men's Soccer Tournament.

The other team will be decided in the match immediately before this one between Honduras and the United States. Who will make it to Tokyo?

The Mexico vs Canada match will be played at the Estadio Jalisco, in Guadalajara, Mexico. The kick-off is scheduled at 9:00 pm ET / 6:00 pm PT. 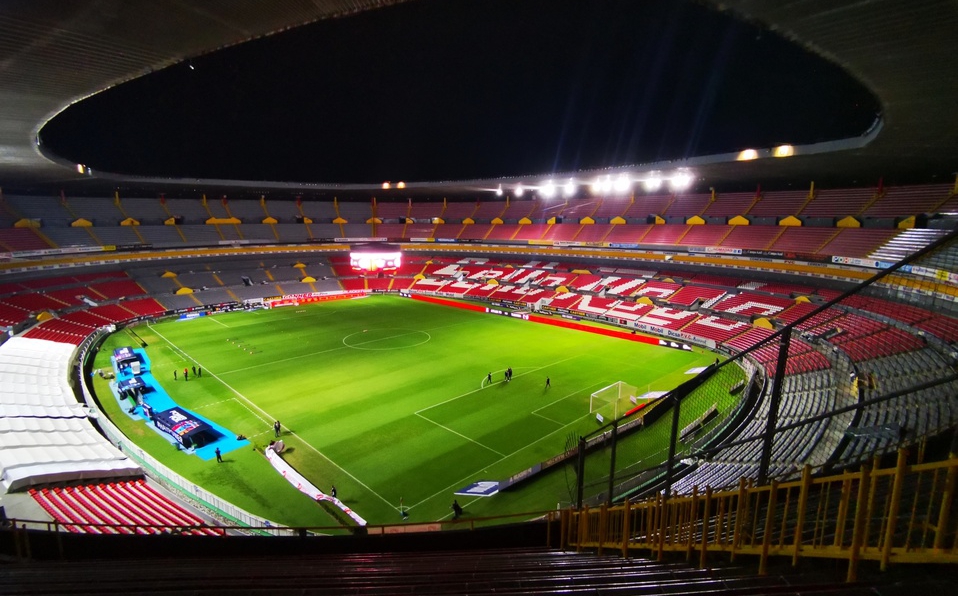 My name is Juan Pablo Rodriguez and I’ll be your host for this game. We will provide you with pre-game analysis, roster updates, and news as it happens, live here on VAVEL.