Thank you for listening to this Carabao Cup match here on VAVEL. Have a good afternoon and see you next time!
3:50 PMa month ago

Chelsea face Newcastle on Saturday (30), while Southampton play Watfford on the same day.
3:48 PMa month ago

Romeu hit Southampton's fifth in the middle of the goal, weakly, making Southampton's third goal. And James hit Chelsea's fifth, sending it into the left corner, with no chance for the goalkeeper, making the score 4-3 and qualifying the Blues for the quarterfinals!
3:46 PMa month ago

Smallbone hit the fourth one and sent it LONG way from the goal! Chillwell hit Chelsea's fourth and sent it into the left corner, making it 3-2 to Chelsea!
3:45 PMa month ago

Long took the penalty kick and sent it into the right corner, scoring his own! Hudson-Odoi took his own and hit the corner, tying the score at 2-2!
3:44 PMa month ago

Armstrong took Southampton's first penalty kick and scored, in the right corner! Marcos Alonso took Chelsea's first penalty and sent it into the left corner, making it 1-1!
3:37 PMa month ago

The game ends in a draw and we will go to penalties here in the Carabao Cup!
3:37 PMa month ago

Chalobah hit a hard shot from outside the box and Forster deflected it away!
3:35 PMa month ago

In the corner taken from the right Lyanco went high, headed hard and Kepa put it over the goal! In the next corner, another header and another save by Kepa!
3:32 PMa month ago

Hudson-Odoi received inside the area and shot hard, but into the net from the outside!
3:24 PMa month ago

Substitution in Southampton: out Djenepo and in Livramento.
3:20 PMa month ago

Double substitution at Southampton: Diallo and Armstrong left to enter Smallbone and Romeo. And in the first throw Smallbone headed hard and forced Kepa to save the ball away!
3:17 PMa month ago

Saúl hit the ball hard from outside the area and sent it into the corner, but Forster kept it over the goal!
3:15 PMa month ago

Havertz received on the left, took off and played back, where Saúl arrived knocking for goal, but out!
3:09 PMa month ago

Double substitution at Southampton: out went Adams and Tella for Walcott and Long. At Chelsea, Ziyech and Barkley left and Chilwell and Mount came in.
3:00 PMa month ago

At the corner Saúl headed the ball into the ground, but into the hands of the goalkeeper. Then Barkely received on the right and beat the goalkeeper!
2:59 PMa month ago

James' free-kick from the left was deflected by Forster!
2:50 PMa month ago

And the first shot of the match is the tie! Tella's shot from the right was caught by Kepa, who could not save it, and it was left to Adams, in the small area, to put it in the back of the net!
2:47 PMa month ago

Havertz takes the first touch and the ball starts rolling again for the second half of Chelsea and Southampton!
2:47 PMa month ago

The teams appear on the field for the ball to roll for the second half.

With Havertz's late first half goal, Chelsea goes on to beat Southampton and qualify for the Carabao Cup quarterfinals!
2:30 PMa month ago

From a corner kick taken from the left, Havertz was higher than the defense and headed the ball into the back of the net, into the left corner, opening the scoring!
2:18 PMa month ago

Armstrong got the shot, with a deflection, that went to the hands of Kepa, who saved in two times!
2:11 PMa month ago

Havertz burst through the middle and hit a hard shot high into the air, but Forster could not keep it out!
2:09 PMa month ago

Yellow card to Diallo, for a foul on a Chelsea counter-attack.
2:02 PMa month ago

Havertz hit a hard shot from outside the box and sent it into the left side of the goal, very dangerously, but out!
1:52 PMa month ago

At the cross coming in the area Saúl went high and headed hard, but Forster saved Southampton!
1:49 PMa month ago

Hudson-Odoi had the first chance of the match, in a shot from the right, which went into the hands of Forster.
1:46 PMa month ago

Armstrong makes the first touch on the ball and it rolls into the first half for Chelsea and Southampton! Before the ball starts to roll, the players kneel in protest against racism.
1:43 PMa month ago

The players leave the field to continue their preparation for the match and soon return to the field for the game to begin!
1:27 PMa month ago 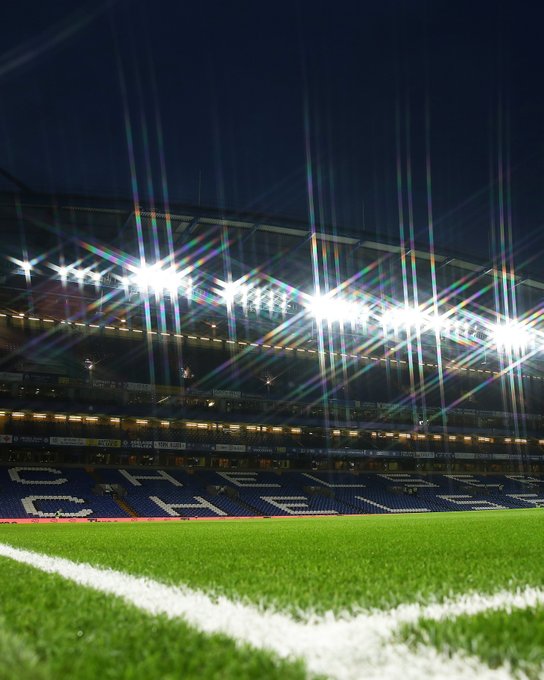 Tomorrow we still have, at the same time of this game, the following games: Stoke City vs. Brentford, West Ham vs. Manchester City, Leicester City vs. Brighton, Preston vs. Liverpool and Burnley vs. Tottenham.
1:20 PMa month ago

The Round of 16 is divided with games today and tomorrow. Today, in addition to the one you are watching now, we have Arsenal against Leeds and Queens Park Rangers facing Sunderland.
1:10 PMa month ago

The players take to the field to begin their warm-up exercises.
1:00 PMa month ago

Southampton is scheduled for the match and will play with: 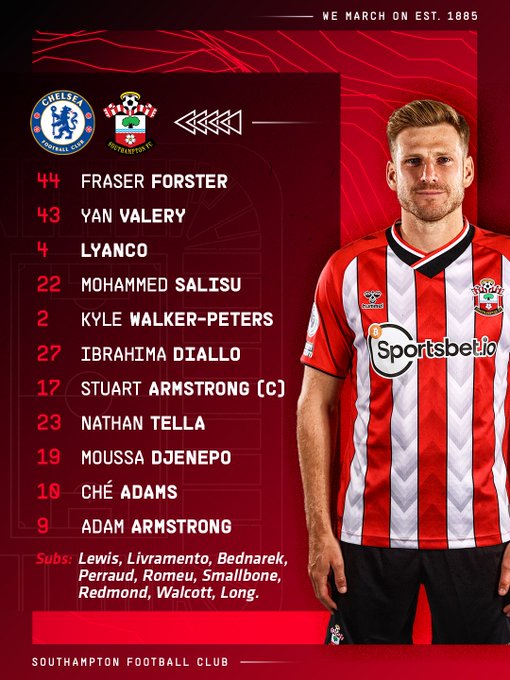 Chelsea is scheduled for the match and will play with: 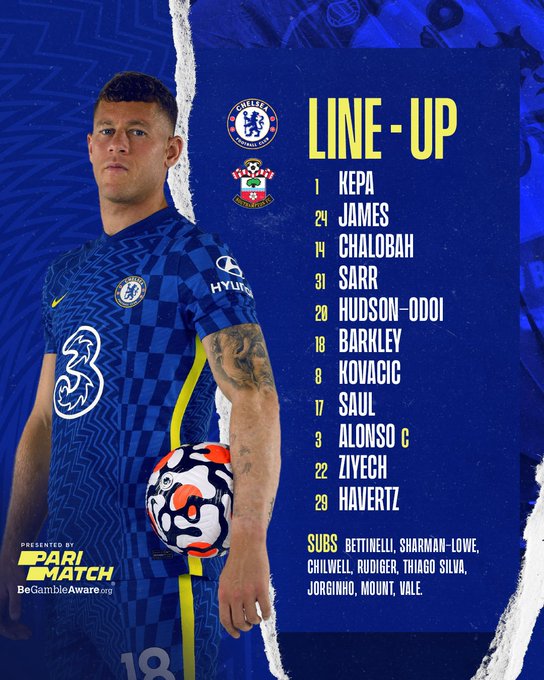 Now begins the broadcast of the Carabao Cup match between Chelsea and Southampton, also known as the EFL Cup!

Do not miss a detail of the match with the live updates and commentaries of VAVEL. Follow along with us all the details, commentaries, analysis and lineups for this Chelsea vs Southampton match
12:40 PMa month ago

How to watch Chelsea vs Southampton Live in TV and Stream

If you want to watch the game Chelsea vs Southampton live on TV, your options is: none.

What time is Chelsea vs Southampton match for Carabao Cup?

This is the start time of the game Chelsea vs Southampton of 26th October 2021in several countries:

Kevin Friend will referee the match, with assistants Adrian Holmes and Simon Beck.
12:25 PMa month ago

And the probable Southampton team for the confrontation is: Forster, Valery, Lyanco, Salisu and Perraud; Diallo, Romeu, Tella and Walcott; Redmond and Adams.
12:20 PMa month ago 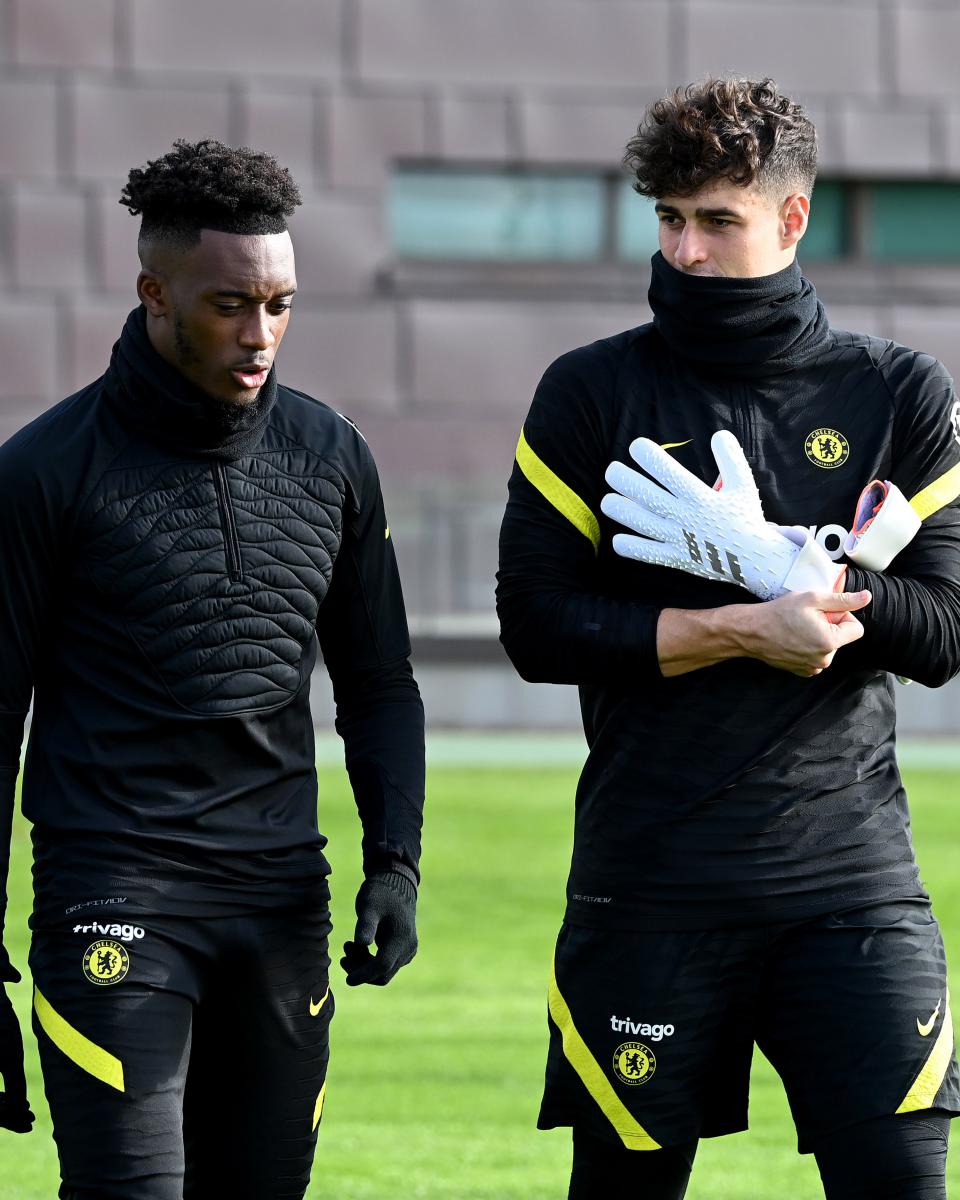 Thomas Tuchel will have big problems in his lineup for the Blues. Werner and Lukaku are out with injuries, but Pulisic and Kanté are still doubts. Ralph Hasenhuttl will also have problems. Stephens and Elyounoussi are injured. Ward-Prowse is suspended and, finally, Broja is out because he is on loan from Chelsea to Southampton.
12:10 PMa month ago

In the Premier League the leader is Chelsea, with 22 points from nine games. Meanwhile, with the same number of games, Southampton is in 16th position, with only eight points. In the Carabao Cup, Chelsea beat Aston Villa on penalties, winning 4-3 after a 1-1 draw in normal time, while Southampton beat Newport County in the second round, 8-0, and Sheffield United in the third round, 4-2 on penalties after a 2-2 draw in normal time.
12:05 PMa month ago

Southampton comes from more modest results, with a draw and a win, both in the Premier League. Against Burnley came the draw, last Saturday (23), in 2-2. Cornet opened the scoring for Burnley, Livramento equalized, Cornet put the visitors ahead again, and Broja equalized again. And before that, on the 16th, Southampton beat Leeds 1-0, with Broja scoring again.
12:00 PMa month ago

Chelsea come into the match after two wins. The first was against Malmo, in the Champions League, by 4-0, last Wednesday (20). In the match Christensen, Jorginho (2) and Havertz scored the goals. And after that, now for the Premier League, came another victory, over Norwich, last Saturday (23), by 7-0 (!!). Mount (2), Hudson-Odoi, James, Chilwell and Aarons, against, scored the goals.
11:55 AMa month ago

Welcome to VAVEL.com’s coverage of the 2021 Carabao Cup match: Chelsea vs SouthamptonLive Score!