End of the match. AS Roma wins it in case of goal poker.
4:45 PMa year ago

Double change for AS Roma. In comes Borja Mayoral and Filippo Missori, out comes Henrikh Mkhitaryan and Tammy Abraham.
4:39 PMa year ago

GOAL! Tammy Abraham gets lively and takes advantage of a rebound in the box and scores with a header.
4:32 PMa year ago

Denys Favorov commits a tackle that is too aggressive, and referee Istvan Kovacs calls a foul.
4:06 PMa year ago

The first half ends with Roma dominating the ball. The locals have been able to reflect it on the scoreboard and win it 2-0 with a missed penalty.
3:43 PMa year ago

Penalty for Roma! Veretout takes it from the spot but the goalkeeper Marsapura gets his hand to the ball and takes away the third for the home team.
3:37 PMa year ago

GOOOOL, Nico Zaniolo capitalizes with a diagonal from the right flank with a powerful right-footed shot. Second goal for Roma
3:32 PMa year ago

Lovro Cvek receives a measured pass and opens up space to take a shot, but the goalkeeper, very attentive, does not allow the action to grow.
3:19 PMa year ago

Goal! Stephan El Shaarawy serves from the left flank to Carles Perez who scores the first for AS Roma to take a 1-0 lead.
3:18 PMa year ago

Lovro Cvek takes advantage of a low pass and without hesitation fires a shot to generate the first danger for Zorya, Rui Patrício saves the shot. The goalkeeper was attentive to the play.
3:12 PMa year ago

He misses! Tammy Abraham gets on the end of a good cross in the box and the ball goes just over the bar.
3:04 PMa year ago

The ball is rolling at the Stadio Olimpico in Rome
2:48 PMa year ago

We are minutes away from the opening whistle between Roma and Zorya in the Europa Conference League match, we will shortly start with the minute by minute.
2:47 PMa year ago

Allahyar Sayyadmanesh is the key player on Zorya's side, with goals in the second half of the game he is expected to be the attacking spark Zorya needs.

Stephan El Sahaarawy is Roma's man to watch, he has four goals to his credit in this UECL, and was a scorer in the previous match between these two teams.
2:30 PMa year ago

Roma has made its arrival at the Stadio Olimpico in Rome.

Roma average 5.0 goals per game in the EUCL, which places them as the highest percentage in the competition.
2:11 PMa year ago

A complication for José Mourinho's side is that they have not taken home points in three straight games since 2020, which could be fuel for Zorya.
2:06 PMa year ago

Although Roma started off on the right foot in the competition, they have made things difficult for themselves with their matches against Bodo. It is therefore vital that they get back on track.
2:01 PMa year ago

Do not miss a detail of the match Roma vs Zorya live updates and commentaries of VAVEL.
1:56 PMa year ago

How to watch Roma vs Zorya Live Stream on TV and Online?

If you want to watch the game Roma vs Zorya live on TV, your options is: Star Plus.

What time is Roma vs Zorya match for Europa Conference League ?

This is the start time of the game Roma vs Zorya of 25th November 2021 in several countries:

The match will be played at the Stadio Olimpico di Roma.

The Stadio Olimpico di Roma (Stadio Olimpico di Roma in Italian) is a multi-purpose stadium, but mainly dedicated to soccer, located in the city of Rome, capital of the Lazio region and Italy. It is the regular home of A.S. Roma and S.S. Lazio, whose supporters occupy the south and north stands respectively. It was the main venue for the 1960 Olympic Games and the 1990 World Cup Final.

Conceived in 1927 and originally called "Stadio dei Cipressi", it was designed and built as part of the project to create a true sports city to be called "Foro Mussolini" (renamed "Foro Italico" after the war). Construction work began in 1928 and was completed in 1937 under the supervision of the architect Luigi Walter Moretti. 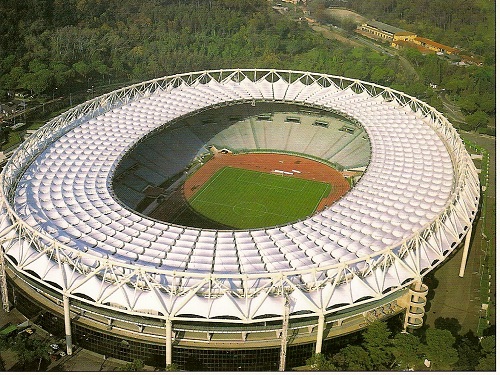 The Europa Conference League is a tournament organized by UEFA and better known as Conference League. It is considered the third most important competition in the Old Continent behind the Champions League and the Europa League. In this competition, the team that wins the title gets a ticket to the next edition of the Europa League. Thirty-two teams participate in this tournament, playing 141 matches during 15 weeks, and 34 countries are represented in the competition. UEFA President Aleksander Céferin mentioned that competitions like this one make UEFA more and more inclusive.
1:36 PMa year ago