We thank you for your attention during the broadcast of this match. To keep up to date with what is happening in Ligue 1, stay tuned to VAVEL.com.
4:56 PM2 months ago

With an inexpressive goalless draw on the scoreboard, PSG and Nice end the game in Paris
4:55 PM2 months ago

MBAPPÉ SENDS A FILTERED BALL TO ICARDI AND THE ARGENTINIAN DOES NOT REACH THE BALL.
4:53 PM2 months ago

Messi takes a corner kick, Nuno Mendes tries to score with a bicycle kick, but the PSG player does not connect well.
4:46 PM2 months ago

Messi wins a ball on the edge of the Nice box, sends a lob that goes wide.
4:43 PM2 months ago

Marquinhos crosses from the right flank into the Nice box, but the Brazilian misses.
4:40 PM2 months ago

In: Mauro Icardi and Leandro Paredes

ÁNGEL DI MARÍA SHOT FROM OUTSIDE THE BOX AND ALMOST SCORED PSG'S FIRST OF THE MATCH. IT WENT JUST WIDE OF THE RIGHT-HAND POST FOR NICE.
4:37 PM2 months ago

Out: Khéphren Thuram and Calvin Stengs

In: Mario Lemina and Justin Kluivert

Messi played with Mbappé in the Nice box, the Frenchman shoots and goalkeeper Benítez makes a save
4:24 PM2 months ago

DOLBERG HEADED IN FRONT OF THE PSG GOAL AND MISSED THE FIRST GOAL FOR NICE.

UNBELIEVABLE WHAT THE VISITING STRIKER MISSED

NUNO MENDES (PSG) SAVES FROM NIZA'S GOALKEEPER. WALTER BENÍTEZ IS THE STAR IN THE VISITORS' GOAL
4:10 PM2 months ago

THE SECOND HALF BEGINS🕕

The second half of the engagement in Paris is already underway
3:54 PM2 months ago

Embed from GioScore
3:51 PM2 months ago

END OF THE FIRST HALF ✔

First half ends with the score tied
3:51 PM2 months ago

The referee adds one more minute
3:47 PM2 months ago

Nice defends with two lines of four players. The visitors' organization is the priority. Paris uses a 4-3-3 formation with speed on the wings as a means of attacking.
3:41 PM2 months ago

Lionel Messi's shot from mid-range is blocked by the Nice goalkeeper.
3:38 PM2 months ago

Andy Delort headed in a cross from the left side of Nice's attack and almost scored the first for the visitors. Donnarumma made a providential save.
3:36 PM2 months ago

Yellow card for Danilo at PSG
3:35 PM2 months ago

Paris Saint-Germain reduces the intensity of its attacks, dominates the ball more but is not as attacking
3:23 PM2 months ago

Dolberg (Nice) header that does not cause danger.
3:18 PM2 months ago

Danilo fished a shot in the Nice box, but the PSG player was ahead of schedule. The line marks offside for Paris
3:15 PM2 months ago

First approach for Nice. Kasper Dolberg shot from half distance and Donnarumma saved the ball.
3:14 PM2 months ago

Angel Di Maria's shot from outside the box hits a Nice defender. The Parisian team controls all sectors of the field.
3:07 PM2 months ago

Paris Saint-Germain moves the ball and is already playing the commitment from the Parc des Princes
2:47 PM2 months ago

Paris bathes in gold with tribute to Messi and Donnarumma 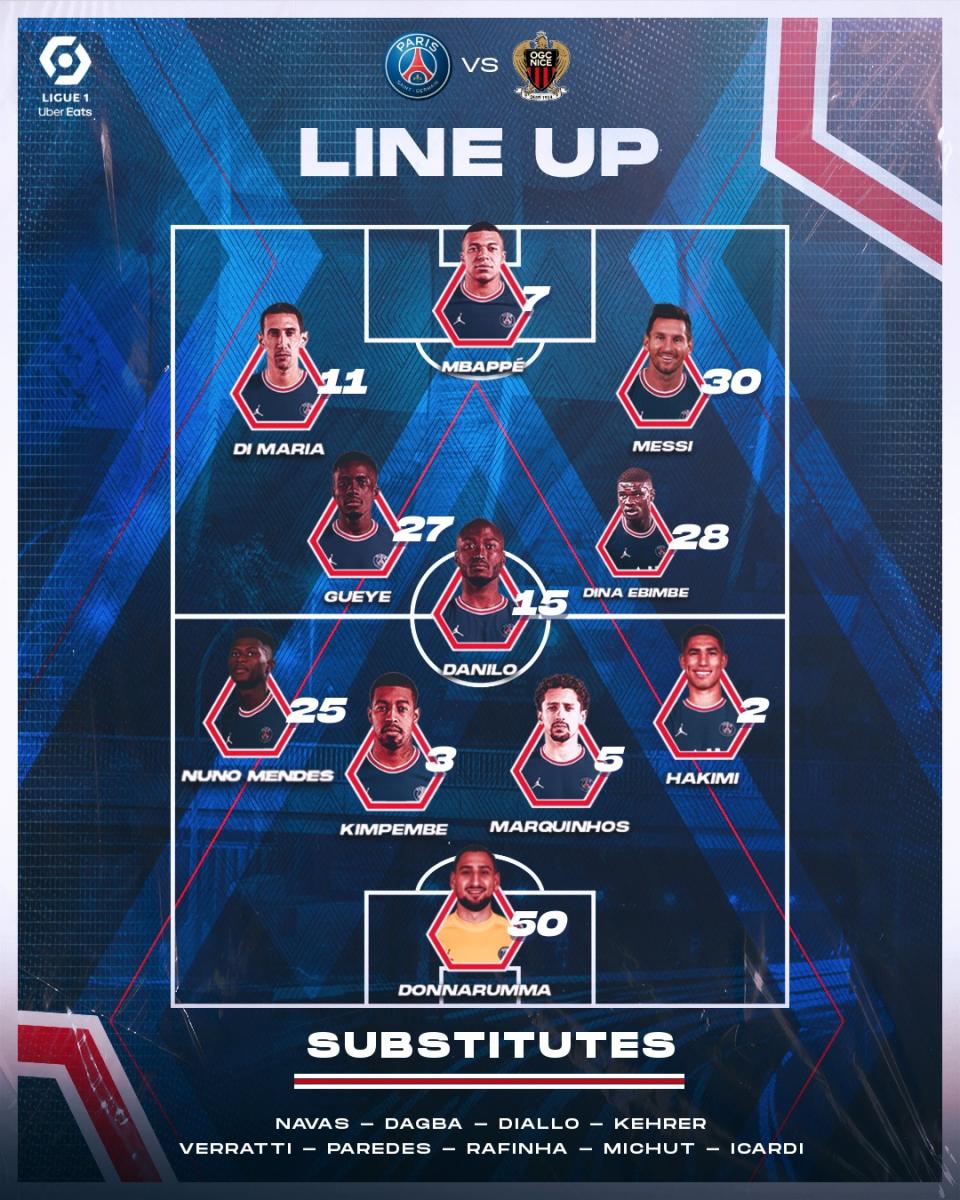 Lionel Messi recovered from gastroenteritis and will start for Paris Saint-Germain
2:25 PM2 months ago

In less than an hour, the match between PSG vs Nice, corresponding to the 16th matchday of Ligue 1, will start.
5:03 AM2 months ago

Everything is ready to enjoy the Ligue 1 match. Do not miss a detail of the match PSG vs OGC Nice live updates and commentaries of VAVEL.com
4:58 AM2 months ago

How to watch PSG vs OGC Nice Live Stream on TV and Online?

If you want to watch the game PSG vs OGC Nice live on TV, your options is: Sky Sports.

What time is PSG vs OGC Nice for Ligue 1 ?

Amine Gouiri has been establishing himself as OGC Nice's mainstay in attack. The 21-year-old Frenchman has great ability to break free and look for space to find the net as a center forward. Currently, Gouiri has eight goals in 15 games played for Nice in Ligue 1 2021-22.
4:43 AM2 months ago

Kylian Mbappé is the best French player at the moment and is the great French revolution in attack. In the absence of Lionel Messi and Neymar Jr, Mbappé will have to lead Paris Saint-Germain's offense against Nice. During this 2021-22 season in Ligue 1, the 22-year-old has scored seven goals in 14 games played.

Nice, going for the feat

OGC Nice comes into this match with the expectation of maintaining its aspirations to get into the direct fight for a place in the next UEFA Champions League. The red-and-white team is currently third in the French league with 26 points, two points behind the second-placed team. Beating Paris Saint-Germain would be a huge achievement for Nice, as it would cut the points gap between them and the Parisians.
4:28 AM2 months ago

PSG, the absolute leader in France

Paris Saint-Germain is the current leader of Ligue 1 in the 2021-22 season. With 40 points from 15 matches played, they have won 13 games, drawn one game and lost one. Mauricio Pochettino's side has won 13 matches, drawn one game and lost another. Now, the Parisians will have to show their power against a complicated Nice without Lionel Messi, suffering from gastroenteritis, and without Neymar Jr, who was injured in the last game after suffering a lateral trauma to his left ankle.
4:23 AM2 months ago

The match will be played at the Le Parc des Princes

The Parc des Princes is the home of Paris Saint-Germain. Located in the center of Paris, the stadium has a maximum capacity of 47,929 spectators. It was inaugurated on July 18, 1897 and has undergone multiple renovations over the years. 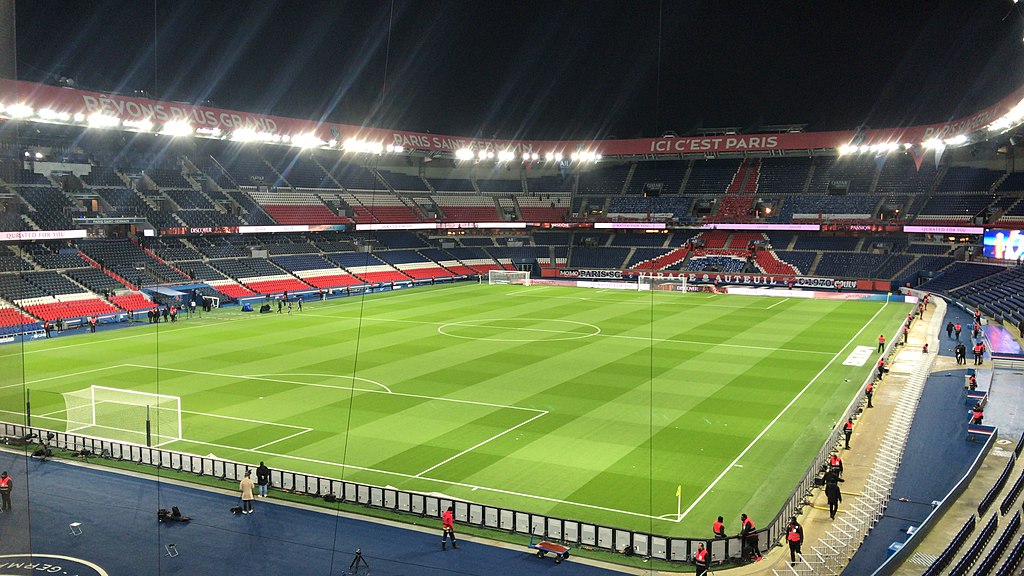