I would like to thank you here for your audience in another game of the Primeira Liga. Have a good night and see you next time!

Substitution in Braga: out Ricardo Horta and in Berna.
5:08 PM2 months ago

Seferovic managed to dribble through three defenders and hit hard, in the left corner, but out! And we have seven more minutes of extra time in the match!
4:56 PM2 months ago

In another cross, now coming from the right, Vitinha arrived shooting first time on the left corner to break the tie and put Braga in front!
4:56 PM2 months ago

In the shot coming from the edge of the area the ball deflected and Vlachodimos put for a corner!

Double substitution at Braga: André Horta and Rodrigo Gomes were out for Castro and Moura.

Seferovic's cross from the right was met by Darwin Núñez, who headed the ball into the middle of the pitch, where João Mário just deflected the ball and sent it into the back of the net, equalizing the match!

At some point the VAR came back and was now used because in a cross coming from the right the ball caught André Horta's arm and the referee pointed out the maximum penalty!
4:42 PM2 months ago

Double substitution for Benfica: Vertonghen and Yaremchuk out, and Seferovic and Paulo Bernardo in. And after the substitution Vitinha invaded the area and hit hard, but the goalkeeper deflected away!
4:36 PM2 months ago

In a beautiful play Ricardo Horta got the pass through the middle in the defense to André Horta, who came out alone in the face of Vlachodimos, dribbling the goalkeeper and knocking to the empty goal!
4:32 PM2 months ago

Substitution in Braga: Iuri Medeiros left and Yan Couto came in, after a timeout due to the VAR outage. At the moment we do not have the technology in use in the match!
4:23 PM2 months ago

Vitinha gives the first touch on the ball and it rolls into the second half of the match!
4:23 PM2 months ago

The teams return to the field to start the second half and have double substitution in Benfica: left Cebolinha and Gonçalo Ramos for the entry of Darwin Núñez and João Mário. And in Braga left Abel Ruíz and entered Vitinha.

With a free-kick goal from Iuri Medeiros, Braga beat Benfica and take the three points home!
3:52 PM2 months ago

Yellow for Al Musrati, for a strong arrival in the midfield.
3:45 PM2 months ago

And Iuri Medeiros unleashed his foot hard into the right corner, into Odysseas' corner, with no chance for the goalkeeper, opening the scoring!
3:45 PM2 months ago

Vertonghen, on the edge of the area, made a dangerous foul for Braga to hit and was even yellow carded for the foul.

Iuri Medeiros crossed the ball from the right and Ricardo Horta arrived kicking, but sent it over the goal!
3:39 PM2 months ago

In a cross coming from the left, in the corner, the ball was deflected in the middle and left to Vertonghen on the edge of the small area, who just shot and put the ball in the back of the goal BUT the ball caught the arm of the defender and the goal was disallowed.
3:37 PM2 months ago

Iuri Medeiros received alone on the edge of the area and decided to shoot. Then he isolated and missed the chance to open the scoring.
3:29 PM2 months ago

Rafa Silva got the pass on the right to Yaremchuk, who dominated and hit hard, but Matheus put for a corner, already beaten and taken by the defense in two times.
3:25 PM2 months ago

And we already have the first yellow of the game. In a climb where he left his arm open, Abel Ruíz hit the defender and was yellow carded for the foul.
3:17 PM2 months ago

Yaremchuk makes the first touch on the ball and it rolls into the first half of the match!
3:14 PM2 months ago

On Sunday the round continues with Marítimo x Tondela, Moreirense x Vitoria and Sporting x Paços de Ferreira. On Monday (4) the round ends with the meeting between Porto and Santa Clara.
2:50 PM2 months ago

The players take to the field to start warming up.
2:29 PM2 months ago

Benfica is scheduled for the match and will field with: 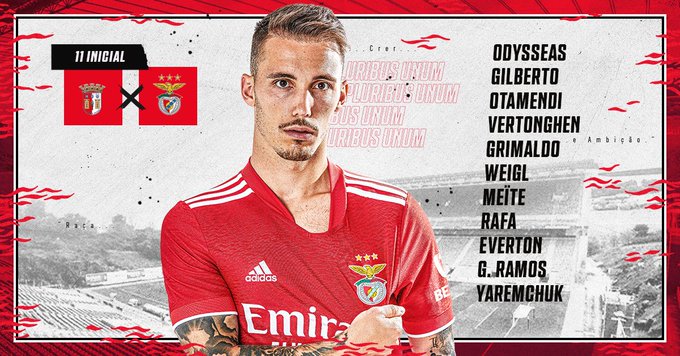 Braga is scheduled for the match and will field with: 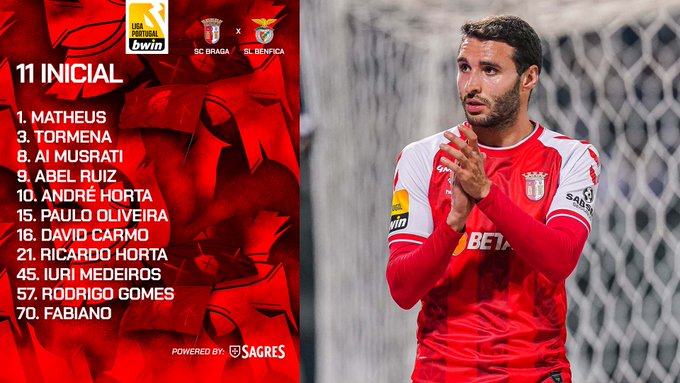 Now begins the broadcast of the Primeira Liga match between Braga and Benfica.

Do not miss a detail of the match with the live updates and commentaries of VAVEL. Follow along with us all the details, commentaries, analysis and lineups for this Braga vs Benfica match.
2:09 PM2 months ago

How to watch Braga vs Benfica Live in TV and Stream

If you want to watch the game Braga vs Benfica live on TV, your options is: none.

If you want to directly stream it: Streaming services and GOLTV, GoltTV Español app.

What time is Braga vs Benfica match for Primeira Liga?

This is the start time of the game Braga vs Benfica of 1st April 2022 in several countries:

Luís Godinho will be the owner of the whistle in the match with the assistants Rui Teixeira and Gonçalo Freire. Hugo Miguel will be in charge of VAR.
1:54 PM2 months ago

Carlos Carvalhal will not be able to use Nuno Siqueira, who has been injured for some time, while Jean Gorby and Roger Fernandes remain out through injury. Nelson Veríssimo will be without Rodrigo Pinho, Lucas Veríssimo and Seferovic, all injured, as well as giving rest to some players who played the World Cup Qualifiers for their national teams.
1:39 PM2 months ago

Benfica still dreams of a spot in the Champions League. The title seems distant, because Porto leads with 73 points. Sporting has 67 and is six points ahead. Braga has 49 points and is in fourth position, one behind Benfica and three ahead of Gil Vicente. Benfica today would go to the Europa League and Braga to the Conference League.
1:34 PM2 months ago

Benfica, on the other hand, comes from two wins and one qualification. In the Champions League, on March 15th, Benfica beat Ajax 1-0, with a goal by Darwin Núñez, qualifying the Portuguese team for the quarterfinals of the competition. And on March 20, Benfica beat Estoril 2-1, with goals from Rafa Silva and Gonçalo Ramos, while André Franco, for the Primeira Liga.
1:29 PM2 months ago

Braga have come from a draw and a win in their last two games. The draw was against Monaco, on March 17, in the round of 16 of the Europa League, which culminated in Braga qualifying for the next stage of the competition, with Abel Ruiz opening the scoring and Diassi equalizing. And on March 20, Braga visited Portimonense and won 2-1 in the Primeira Liga, with goals from Francisco Moura and Yan Couto, while David Carmo, who scored an own goal.
1:24 PM2 months ago