Thank you very much for watching the Arminia vs Bayern Bundesliga match. Follow the sporting news on VAVEL.com.
11:38 AMa month ago

As expected, the leader Bayern beat Arminia with a great performance by Davies. Now, Arminia is fighting to avoid relegation and Bayern is gaining more and more points to win its tenth consecutive Bundesliga.
11:29 AMa month ago

The referee does not add another second and the match in Bielesfeld is over.
11:28 AMa month ago

In: Gabriel Vidovic and Eric Choupo-Moting

In: Serge Gnabry and Robert Lewandoski

GOOOOOOAL FOR BAYERN, after a move that started from the back, Musiala finishes off to give his team the third and put the home team to the sword.
11:19 AMa month ago

Alphonso Davies (Bayern) header is too high.
11:18 AMa month ago

Goretzka (Bayern) right footed shot from outside the box is blocked by Arminia.
11:16 AMa month ago

In: Gonzalo Castro and Robin Hack

Joshua Kimmich (Bayern) is shown the yellow card for a foul on Prietl (Arminia).
11:07 AMa month ago

Leroy Sané (Bayern) gets in a left footed shot but it misses the target.
11:06 AMa month ago

In: Jamal Musiala and Leroy Sane

Out: Thomas Müller and Marcel Sabitzer

Thomas Müller (Bayern) header misses to the left side of the goal.
10:49 AMa month ago

A 50-minute first half with an own goal, two substitutions and two yellow cards, a very eventful match.
10:27 AMa month ago

BAYERN GOOOOOOOL, Serge Gnabry strikes a right-footed finish after a deep pass from Kimmich that was subject to a VAR review that finally declared the play legal.
10:24 AMa month ago

Patrick Wimmer (Arminia) header from inside the box is blocked.
10:22 AMa month ago

Marcel Sabitzer (Bayern) sees his shot blocked by the goalkeeper.
10:08 AMa month ago

Fabian Kunze (Arminia) is shown the yellow card for a foul on Tanguy Nianzou (Bayern).
9:56 AMa month ago

Corner for Arminia.
9:52 AMa month ago

Janni Sierra (Arminia) has been fouled by Joshua Kimmich (Bayern).
9:45 AMa month ago

Leon Goretzka (Bayern) header from a difficult angle on the left is too high.
9:43 AMa month ago

ARMINIA'S AUTOGOAL, Jacob Laursen puts through his own net to open the scoring for Bayern.
9:42 AMa month ago

Offside of Bayern.
9:41 AMa month ago

Robert Lewandoski's (Bayern) shot is blocked by the goalkeeper.
9:38 AMa month ago

The teams take the field to begin the ceremonial acts.
9:27 AMa month ago

In five minutes the duel between David and Goliath will begin at the ShücoArena.
9:15 AMa month ago

Clearly it is a very close match. It is the leader vs. one of the last places, but as we have seen several times, the "small" teams tend to grow against the "big" teams.
9:13 AMa month ago

The designated judge for this match is Dr. Matthias Jöllenbeck.
9:12 AMa month ago

Both teams are already on the field doing warm-up exercises.
8:57 AMa month ago

In less than an hour the match will start from the city of Bielefeld.
1:30 AMa month ago

In a few moments we will share with you the starting lineups for the Arminia vs Bayern live match, as well as the latest information from the SchücoArena. Don't miss a single detail of the live match updates and commentary from VAVEL's coverage.
1:25 AMa month ago

How to watch Arminia vs Bayern Live Stream on TV and Online?

If you want to watch Arminia vs Bayern live on TV, your options are: ESPN and Star+

If you want to watch it directly by streaming: Star+

What time is Arminia vs Bayern for Bundesliga?

This is the start time of the game Arminia vs Bayern of April 17th 2022 in several countries:

They have played 18 matches of which only two were won by Arminia, Bayern won 14 and two ended in a draw.
1:10 AMa month ago

Poland's Robert Lewandoski is a killer par excellence. He has 32 goals and one assist so far this season. There have been many rumors about his departure from the Bavarian team and they are probably true.
1:05 AMa month ago

The 34-year-old German striker Fabian Klos is the team's outstanding player. He has three goals and one assist in 25 of 29 games played.
1:00 AMa month ago

In contrast to their opponents, Bayern is at the other end of the table and is the tournament leader with 69 points. Of their last five matches, they have drawn two and won three.
12:55 AMa month ago

The home team is in the relegation zone in 17th place with only 26 points, which leaves them 43 points behind their opponents. They have lost four of their last five matches, and the only one they did not lose was a draw.
12:50 AMa month ago 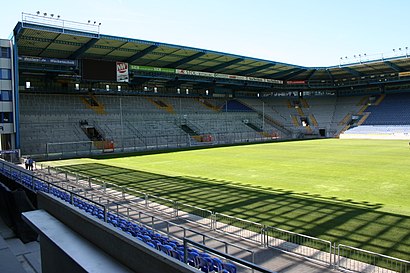 The field will be the SchücoArena, the home of Arminia Bielefeld, which is located in the city of Bielefeld in Germany. It was built in 1926 and has a capacity of 28,008 spectators.

Welcome to VAVEL.com's coverage of the Bundesliga: Arminia vs Bayern Munich Live Updates!

Philadelphia Union vs Inter Miami CF preview: How to watch, team news, predicted lineups, kickoff time and ones to watch 4 hours ago

New York Red Bulls vs Chicago Fire preview: How to watch, team news, predicted lineups, kickoff time and ones to watch 4 hours ago

D.C. United vs NYCFC preview: How to watch, team news, predicted lineups, kickoff time and ones to watch 8 hours ago