Thus the celebration of Leipzig in its victory over Berlin

LEIPZIG GOAL Emil Forsberg scores after heading a cross from a very difficult position and sending the ball to the right corner. Excellent definition.
4:34 PMa month ago

Sven Michel is in a great position after receiving a precise pass. He shoots on goal, but hits a defender who managed to get in the way of his shot. Union Berlin has a corner.
4:24 PMa month ago

Emil Forsberg hits a great first-touch shot from the edge of the box that goes near the left post.
4:05 PMa month ago

LEIPZIG GOAL André Silva converts a penalty with a high whiplash against which the goalkeeper can do nothing.
4:02 PMa month ago

Dani Olmo takes advantage of a pass that splits the defense and shoots on goal from a good distance. Frederik Ronnow has a clear vision and comfortably stops the shot aimed at the center.
3:32 PMa month ago

1 minute extension will be added.
3:28 PMa month ago

Robin Knoche is booked for knocking down an opponent.
3:28 PMa month ago

Clear chance for Andre Silva, he gets hold of a loose ball inside the area, but shoots wide of the right post.
3:22 PMa month ago

BERLIN GOAL Sheraldo Becker scores with a brilliant low shot to the center of the goal after receiving a superb pass inside the box from Christopher Trimmel.
3:06 PMa month ago

The game has started, enjoy it.
2:45 PMa month ago

This is the XI starter of Berlin.

Everything is ready in the Red Bull arena for the semi-final of the DFB Pokal.
2:40 PMa month ago

This is the referee of today

This is the XI starter of Berlin.

Berlin has no casualties for this match.
2:21 PMa month ago

RB Leipzig has no casualties for this match.
2:16 PMa month ago

Freiburg is already waiting for the winner of this match for this edition's DFB Pokal final
2:12 PMa month ago

Both teams are seeking their first DFB Pokal trophy in their history, Leipzig have 2 runners-up while Berlin have 0 runners-up
2:04 PMa month ago

Today's favorite is Leipzig to advance to the DFB Pokal final at -500 odds according to bookmakers
1:08 AMa month ago

Do not miss a detail of the DFB Pokal 2022 match RB  Leipzig vs Union Berlín live updates and commentaries of VAVEL.
1:03 AMa month ago

If you want to watch the game RB  Leipzig vs Union Berlín  Live on TV, your options is SKY Sports

Games between RBLeipzig vs Union Berlín

1 victory for the RB Leipzig team in the last 5 matches looks a favorable outlook for the home team, however a hope for Union Berlin may be that they won the most recent game between them 2 so they will come out with everything, in the last 5 games in this RB Leipzig stadium there have been 3 draws and 1 win for both teams.
12:53 AMa month ago

For his part, Kevin Behrens, 34-year-old striker, will be the most important player of the Berlin team with 2 goals in the tournament.
However, he hasn't seen any activity in the last 8 games so he will have to show that he is in rhythm and take on the away team.
12:48 AMa month ago

Striker Christopher Nkunku will be RB Leipzig's player to watch as he has 3 goals in the tournament in addition to having a scoring streak as he has 3 goals and 2 assists in his 3 most recent games so he will seek to stay on fire and reach the final .
12:43 AMa month ago

After the hard-fought tie against St Pauli, Union Berlin cannot underestimate RB Leipzig despite having linked a series of 5 of their last six official duels without losing, those from the German capital will have to continue playing in a good way if they want to dream of reach the end.
The Union Berlin team comes from beating St. Pauli 2-1 and 3-2 in the Berlin derby against Hertha, so the steel team will seek to stay in the top places in the Bundesliga, currently they are sixth with a total of 47 points and only 9 defeats in the domestic league.
12:38 AMa month ago

Leipzig reaches the prelude to the DFB Pokal final after eliminating Hannover by a score of 4-0 and Rostock 2-0 in the round of 16, it will be the first time that the RB Leipzig team is in this instance of the tournament and it couldn't be at a better time of the season, the team from "Die Roten Bullen" have 16 games without losing in all competition and are in the semifinals of the Europa League so they still dream of the cup double.
In the Bundesliga RB Leipzig is in the first positions and develops a good football led by Tedesco and this is reflected in the results as they have 4 wins in their 5 most recent games.
12:33 AMa month ago

The game will played at the Red Bull Arena

Red Bull Arena is a football facility located in Leipzig, Saxony, Germany. It is the largest football stadium in the former East Germany and has also hosted music concerts as well as football.

Opened in 2004, it is currently the home stadium for first-division club RB Leipzig, with FC Sachsen Leipzig having previously used the stadium from its opening until 2009. Due to UEFA sponsorship regulations, the stadium is known as the RB Arena for European matches. It has a capacity of 47069 people. 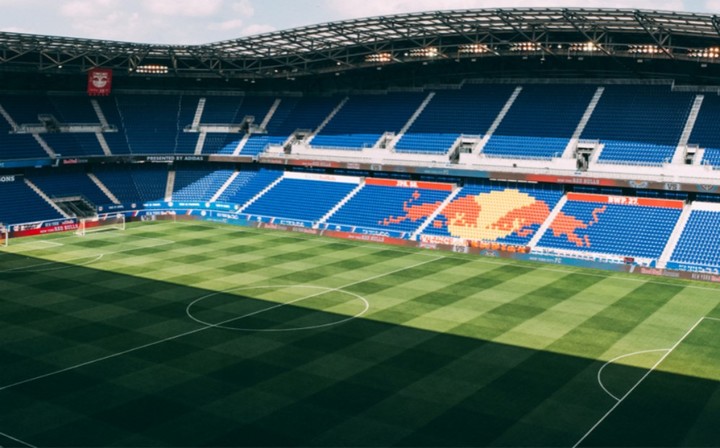