Thank you for listening to this latest Libertadores match here on VAVEL. Have a good night and see you next time!

Bragantino returns to the field on Tuesday (24), when he visits Nacional for the last round of the Libertadores group stage. Estudiantes plays on the same day, when it visits Vélez, also in the Libertadores.

With a goal from Del Prete, Estudiantes beat Bragantino away from home and confirm their place in the next round of the Libertadores!
8:10 PMa month ago

A free-kick is raised in the box and the defense takes it away.

Cleiton is now yellow for complaining. On the right Artur has a foul to lift in the area!

Boselli got a great pass to Orosco, who dribbled around the goalkeeper and hit an empty net. The linesman cancelled the goal for offside (he was not offside), but we don't have VAR and the game goes on 1-0!
8:03 PMa month ago

Artur received on the right and found Aderlan in the area, who hit the ball over the goal! Estudiantes left Zuqui and Castro for Toledo and Kociubinski.
7:59 PMa month ago

In yet another cross in the area the ball lifted by Artur and deflected by Realpe and the ball exploded at the post!
7:53 PMa month ago

Double substitution in Bragantino: Ytalo and Helinho left for the entry of Alerrandro and Jan Hurtado. In Estudiantes Del Prete left - who received a yellow card for being late - and Orosco entered.
7:51 PMa month ago

Castro's strong shot from outside the area was blocked by the defense, and on the rebound, with a pull-up - or bicycle - Del Prete managed to finish and score a great goal!
7:45 PMa month ago

Double substitution in Estudiantes: Díaz and Pellegrini left to enter Boselli and Zapiola. On the way out Díaz took the long way out and was yellow carded.
7:37 PMa month ago

Yellow card to Sorriso, for bringing down the Estudiantes player in the midfield.
7:34 PMa month ago

On the edge of the box Artur shot and sent it over the goal! And in the Bragantino left Helinho and Raul for the entry of Praxedes and Aderlan.
7:33 PMa month ago

Yellow for Rodríguez, for pulling Artur on Braga's counter-attack.
7:29 PMa month ago

Helinho got the cross and Ramires arrived with a half-cycle, but Andújar spied what would have been a great goal, sending it over the goal!
7:28 PMa month ago

Artur took off from the right and found Ytalo in the middle, who dominated, arranged and hit hard from outside the area, but sent it out!
7:25 PMa month ago

Díaz took off from the right, took to the middle and hit hard from outside the area, but sent it over the goal!
7:20 PMa month ago

Ytalo gives the first touch on the ball and it rolls into the second half of the match!
7:20 PMa month ago

The teams return to the field to start the second half. In the Bragantino left Jadsom and entered Sorriso.

Without goals, Bragantino and Estudiantes tie the fifth match of the Libertadores group stage!
7:01 PMa month ago

Díaz managed to get the shot already inside the area and sent the ball into Cleiton's hands.
6:58 PMa month ago

Pellegrini, in an unintentional shot in the split, forced Cleiton to save Bragantino!
6:56 PMa month ago

Jadsom risked his shot from outside the area and sent the ball to the left side of the goal!
6:50 PMa month ago

Ytalo tried to steal the ball and made a tackle in the midfield, receiving a yellow card for the foul.
6:47 PMa month ago

Raul hit hard from outside the area and sent it to the left side of the goal!
6:43 PMa month ago

On the right Helinho was passing through the defender and won a free-kick to lift or hit straight at the goal! Más took yellow for the foul and Artur hit and the ball deflected in the middle of the way, to the defense of Andújar and he himself got it on the rebound!
6:31 PMa month ago

Pellegrini tried to shoot and sent it over the goal.
6:23 PMa month ago

Castro received the ball on the right, on the edge of the area, and hit a cross, but it went to the right side of the goal!
6:14 PMa month ago

Díaz takes the first touch on the ball and it rolls into the first half of the match!
6:13 PMa month ago

A minute's silence is now observed in honor of Covid-19 victims in America.

The Brazilian national anthem is played before the ball starts to roll.
6:10 PMa month ago

The players take to the field to start the match!

At the same time of this match we have Caracas vs. The Strongest and Peñarol vs. Later today we have Bocas Juniors-Corinthians, Flamengo-Universidad Católica and Sporting Cristal-Talleres.

Now we have Estudiantes' line-up for the match!

The players take to the field to begin their warm-up exercises.
5:31 PMa month ago

Now the artwork with the lineup of the two teams! 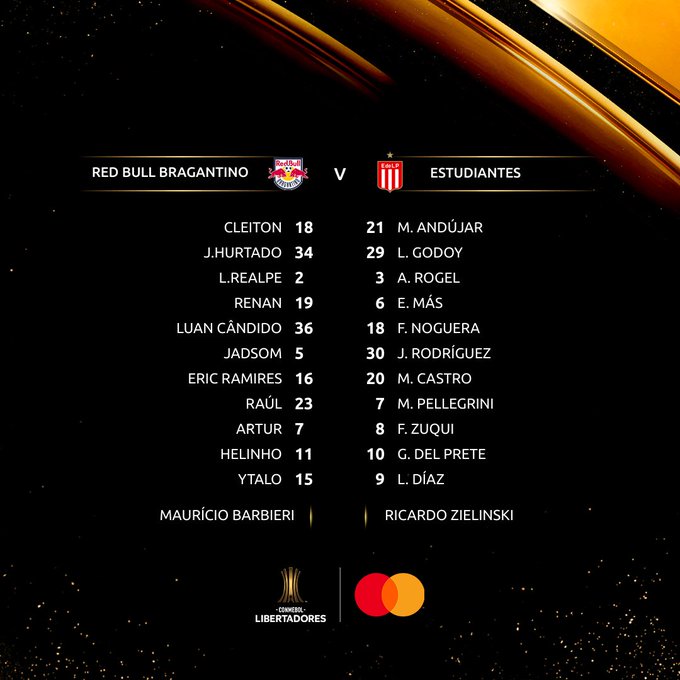 Bragantino is lined up and will take the field with: 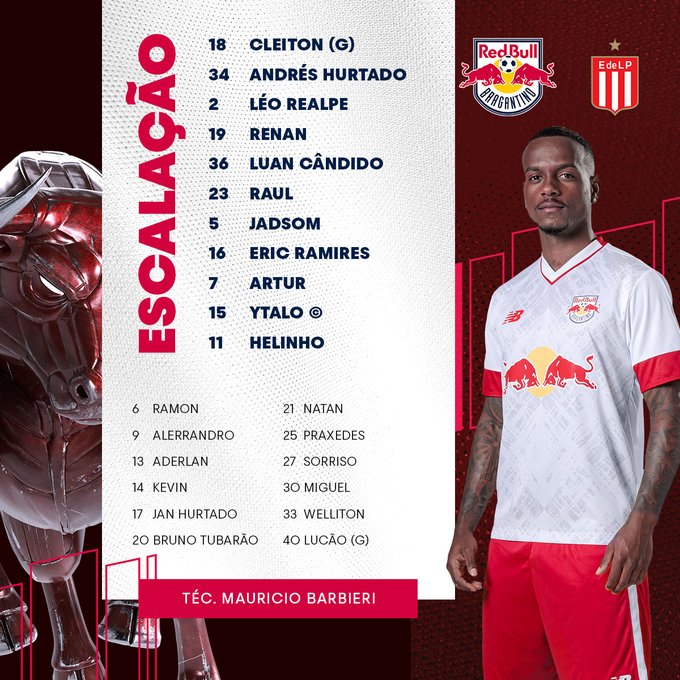 Now begins the broadcast of the match between Bragantino and Estudiantes, in the fifth round of the Libertadores group stage!

Do not miss a detail of the match with the live updates and commentaries of VAVEL. Follow along with us all the details, commentaries, analysis and lineups for this RB Bragantino vs Estudiantes match.
5:11 PMa month ago

If you want to watch the game Bragantino vs Estudiantes live on TV, your options is: none.

If you want to directly stream it: Streaming services and beIN SPORTS, beIN SPORTS CONNECT app.

What time is RB Bragantino vs Estudiantes match for Copa Libertadores?

This is the start time of the game RB Bragantino vs Estudiantes of 17th May 2022 in several countries:

With the whole team coming from Paraguay, the referee of the match will be Juan Benitez, with José Cuevas and Rodney Aquino as assistants. Remember that we do not have VAR in this phase of the competition.
4:56 PMa month ago

The probable Estudiantes team for the match is: Andújar, Godoy, Rogel, Noguera and Más; Castro, Rodríguez, Zuqui and Pellegrini; Diaz and Boselli. 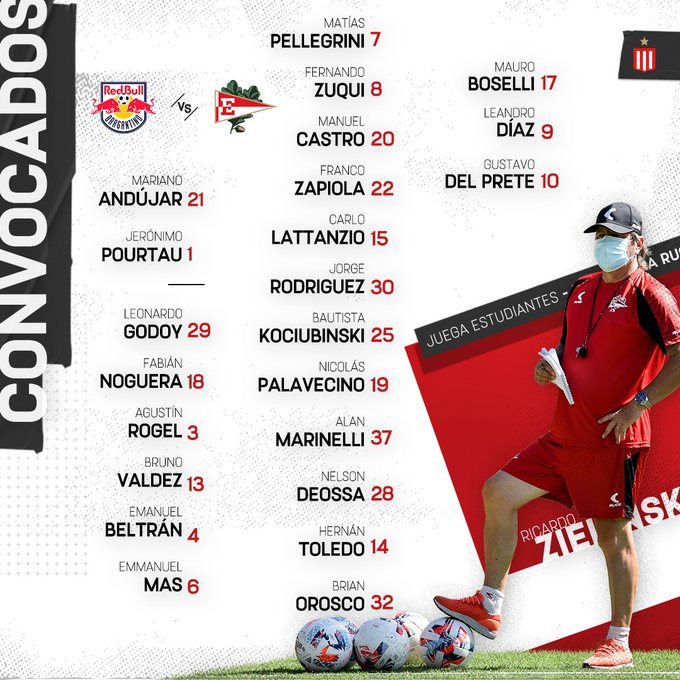 Mauricio Barbieri will not be able to use the injured Praxedes, Martinez, Gabriel Novaes and Carlos Eduardo. Rafael Zielinski will be without one player: Ezequiel Muñoz.
4:41 PMa month ago

In group C who leads is Estudiantes with 10 points, already almost qualified, while Bragantino adds five points in second position. In third place are Nacional with four and, at the bottom, Vélez, with two points.
4:36 PMa month ago

In the Brazilian Championship Bragantino is in the group of teams that have nine points, along with America-MG, Palmeiras and Internacional, staying in 10th place. In this first phase of the Argentine Championship, Estudiantes is in group B, with 28 points, one above Boca and eight above Tigre and Aldosivi, clubs that qualified for the quarterfinals.
4:31 PMa month ago

Meanwhile, Estudiantes is also coming from a troubled moment in the season. In the Libertadores Cup, on Tuesday, Estudiantes beat Nacional 1-0, with a goal by Manuel Castro. Then, on Saturday, in the group stage of the Argentine Championship, Estudiantes was defeated by Rosario Central, 3-1, with Ferreyra, Véliz, and Marco Ruben, while Piñeiro scored the other goal. Finally, last Wednesday, Estudiantes drew 1-1 with Argentinos Juniors, with Boselli opening the scoring and Vera equalizing. In the penalty shootout for the quarterfinals of the second phase of the Argentinean Championship, the Juniors went through 4-3.
4:26 PMa month ago

Bragantino comes in a bad sequence of results in recent games. On Sunday (8), against Corinthians, the defeat came at home, by 1-0, with a goal from Renato Augusto. After that, on Wednesday (11), Braga received Atlético Mineiro and drew 1-1, with Ytalo opening the scoring and Nacho Fenández equalizing. And last Saturday (14), Bragantino visited Palmeiras and were defeated 2-0, with goals from Danilo and Raphael Veiga.
4:21 PMa month ago

Charlotte FC vs Austin FC preview: How to watch, team news, predicted lineups, kickoff time and ones to watch 15 hours ago