Eugenie Bouchard is back on court at the Connecticut Open after being awarded a wildcard. After a disappointing first round loss in Toronto, the Canadian needed a good victory to find her confidence again. Bouchard wouldn’t have an easy opponent as he had to face American, Lauren Davis. It’s been a few years of struggle for the former Wimbledon finalist, but in this match, the Canadian dominated throughout the match. In 73 minutes, Bouchard sealed a victory and an encounter against Agnieszka Radwanska after a 6-1, 6-3 win over Davis.

The Canadian started the match with a solid hold to 30 and now sought an early break to take control of the match. Davis, on the contrary, struggled with her first serve which gave Bouchard the perfect opportunity to attack her second which eventually paid off when the Canadian obtained the break to lead 2-0. However, one of the biggest problems Bouchard has displayed in the last years is her lack of consistency to hold her serve and she immediately gave Davis the chance to retrieve the break which she took after hitting a forehand winner.

After losing the lead, the Canadian was forced to seek the break again and with the help of Davis’ mistakes she was back on the lead again. Serving at 3-1, Bouchard was once more in a comfortable position, but Davis made her way to force the game to be decided after a deuce. Fortunately for Bouchard, she was helped by her serve to consolidate the break and extend her lead to 4-1. 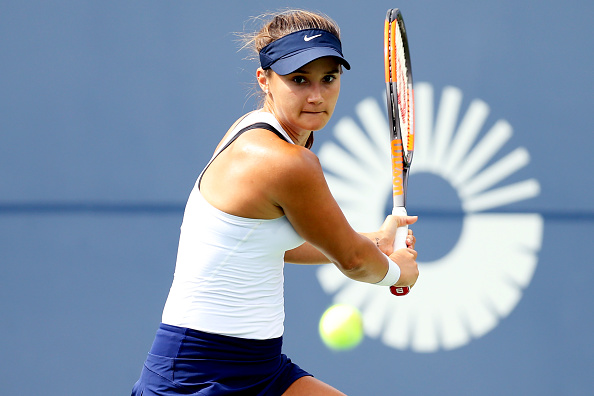 Bouchard was displaying her best tennis as she was able to control most of the points by hitting the ball early, causing Davis to make more mistakes. The American hit her fourth double fault to give the Canadian another break opportunity which she eventually took after hitting a powerful return that Davis was not able to put back on court. Serving for the first set, Bouchard didn’t seem to show any sign of nerves as she raced to get three set points, but Davis tried to get the momentum on her side by erasing two set points, but Bouchard mended her previous mistakes and took the set 6-1 after hitting a forehand winner.

Bouchard finds the break at the right time

The American didn’t let the previous set affect her opening serving game as she stormed to hold, only losing one point. However, the Canadian was still feeling the momentum and didn’t find any problem to hold and level to 1-1. Despite the improvements, Davis still struggled with her serve and hit two double faults to bring a deuce after a comfortable 40-15 lead. On break point, Bouchard fired up a forehand return to win the first break of the second set.

Despite playing with confidence, the Canadian still showed some of her problems, especially with her serve as she couldn’t close the game after leading 40-15 and let Davis back in the game. This was an opportunity that the American didn’t waste as she didn’t hesitate to take the first break opportunity to level the match 2-2.

It seemed like the Canadian was playing her best tennis when she was in trouble as she ruthlessly attacked her opponent’s serve to bring a break point which eventually she would win after Davis hit her seventh double fault to lead 3-2. The American needed a quick reaction to stay in the match and after a conversation with her coach she began playing more aggressively, but even playing better she was not able to find a way to get back the break as Bouchard held to be up 4-2. 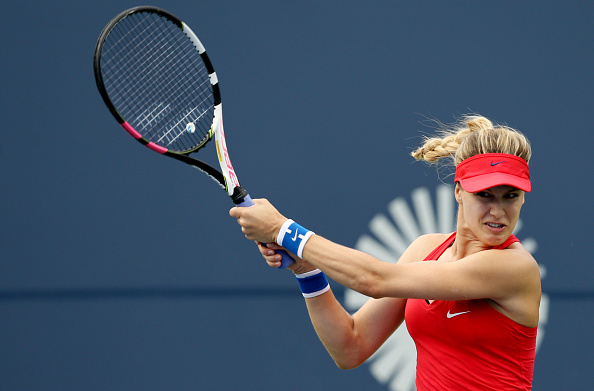 The American held her serve in the next game, putting the pressure on Bouchard to hold her own. Facing a break point, Bouchard used her serve to save one after Davis hit a forehand into the net. Using her ability to take the ball earlier, Bouchard moved Davis all court to save the second break point and force a deuce. A good second serve gave an advantage to the Canadian which she later converted to a 5-3 lead.

Serving to stay in the set, Davis raced to a 40-0 lead but a series of unforced errors help Bouchard to be back in the game. Bouchard hit a stabbing forehand return that left Davis unbalanced, giving the Canadian the space to hit a forehand winner and turn it into her first match point. Once again, Bouchard used her return to put Davis in trouble as she hit a forehand into the net, giving Bouchard her pass to the second round.

In the second round, Bouchard will face the top seed, Agnieszka Radwanska. The Pole isn’t going through her best moments and this is something that the Canadian could have in her favor to finally have a win against her. They have played each other on three occasions, Radwanska winning all the past encounters, not even losing a set to the Canadian. Their last meeting was in 2016 at Eastbourne where the Pole prevailed 6-3, 6-3.

Bianca Andreescu to skip the rest of the season2 days ago

Bianca Andreescu pulls out of French Open5 days ago

Rome Masters Shapovalov into the Semis5 days ago

WTA Rome: Victoria Azarenka gets past Venus Williams7 days ago