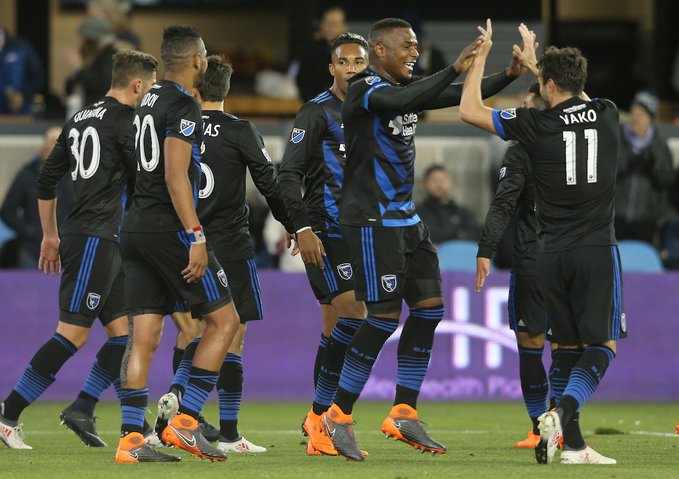 Founded in California in 1974 the San Jose Earthquake (formally known as the San Jose Clash) s are a professional soccer club that played between 1974 and 1988 as part of the North American Soccer League (NASL). The Franchise was originally set to be based in San Francisco but due to slow season ticket sales, the Franchise made a switch to the Spartan Stadium in San Jose. In 1980 San Jose Earthquakes signed Northern Irish International George Best. The former Manchester United player scored 21 goals in 56 appearances for the team.

The Franchise picked up huge support from the local area which had been deprived of a sports franchise in the locality. During the clubs first season they averaged attendances of over 15,000 fans per game, double the rest of the league. The high attendances led to the Spartan Stadium being appointed the host of the first NASL Soccer Bowl in 1975.

The team was briefly known as the ‘Golden Bay Earthquakes’ between 1983-1984, but after the NASL collapsed in 1984, the name was San Jose Earthquakes was brought back. The team was then moved to compete in the Western Soccer League (WSL). The team was then bought by Peter Bridgwater, he owned the club until it was sold in 1988.

The name ‘Earthquakes’ came from a newspaper competition organised by the San Jose Mercury News. The name was chosen by Dick Berg, General Manager of the team. This received some criticism due to the closeness of the San Andreas Fault to the club.

In 1994 the San Jose organization was founded, as San Jose was one of six teams to be a charter member of Major League Soccer (MLS). In 1995 the MLS then added the teams of Tampa Bay, Denver, Dallas and Kansas City the Earthquakes were allocated into the Western Conference.

On 1st August 1995, Peter Bridgwater returned to the club as President and General Manager of the team. An icon of American soccer Bridgwater was an important member behind the formation of the Western Soccer Alliance and was the Venue Executive Director for the San Francisco venue of the 1994 World Cup. Despite Bridgwater still owning the rights to the name and logo, the team reformed their name to be known as the ‘Clash’. This was partly down to Nike, a crucial investor in the MLS.

The first Head Coach of the Earthquakes was appointed in December 1995 called Laurie Calloway. After little time had passed, Calloway announced U.S National Team John Doyle and Nigerian International Michael Emenalo as the first two members of the club. In 1996 San Jose brought Eric Wynalda to the team, this was controversial as Calloway and Wynalda did not see eye to eye when they worked together at the Hawks. San Jose continued to use their connections to the Blackhawks as they made the first-ever trade in MLS history, swapping Rhett Harty for Troy Dayak.

In 1996, San Jose hosted the first inaugural game of the MLS at the Spartan Stadium in front of a crowd of 31,683. Playing against D.C. United, San Jose won the match 1-0 thanks to a goal by Eric Wynalda, the first goal in MLS history. San Jose then set the record attendance against Los Angeles Galaxy a month later. The attendance of 31,728 fans in the Spartan Stadium was the most a sporting event had ever drawn in the San Jose city.

After relative success in the first season of the MLS, San Jose started to falter. Bridgwater sacked Calloway and hired Brian Quinn, however, this led to little improvement as the Clash finished bottom of the Western Conference in1997. There was little improvement to the team’s fortunes and Quinn was sacked by 1999 and replaced by Lothar Osiander. Another major change that happened in 1999, the franchise changed its name back to the Earthquakes.

Poor results continued, however, and things only started to improve when the Earthquakes hired Frank Yallop before the 2001 MLS SuperDraft. Yallop revolutionised the team, the signing of Landon Donavan on loan from German giants Bayern Leverkusen. The new head coach also brought in Tim Hanley and Dominic Kinnear as goalkeeper and assistant coaches. These changes brought almost immediate success to the club.

The Earthquakes finished thee 2001 season with 41 points, an improvement of 16 from the previous season. They finished the season by winning the MLS Cup, beating rivals Los Angeles Galaxy 2-1 in the final. San Jose Earthquakes didn’t have to wait long for their next MLS title, they beat the Chicago Fire 4-2 in 2003 final. Yallop then left the Earthquakes to take charge of the Canada national team. This saw assistant coach Kinnear take the top job and former player John Doyle given the assistant coach position.

There was more change in early 2004 when general manager Johnny Moore resigned from his position. This was due to the provocative potential rebrand to San Jose America, which would have seen ownership change to Mexico’s Club América’s owners. Fans of the club were going through a tough time as former Los Angeles Galaxy defender Alexi Lalas was appointed Moore’s replacement. This change in management saw plans to move the club to Houston and star player Landon Donovan’s playing rights traded away. To make things worse Donovan then moved to arch-rivals Los Angeles Galaxy.

Despite all the upset off the field disruption, Kinnear kept results up. The Earthquakes qualified for the playoffs twice and won the MLS Supporters Shield in 2005.

Although the team was having on-field success, troubles off it continued to worsen for the San Jose Earthquakes. The owner, Anschutz Entertainment Group declared that the team would move to Houston, this was because the franchise failed to find a soccer-specific stadium for the team in San Jose. This saw the team move to Houston, including some of the coaching staff and players, were moved with the team. The move, however, saw the team move but lose their name, colours, logo and history, as ruled by the MLS Commissioner Don Garber. The team became known first as Houston 1836 and then Houston Dynamo.

In 2006 fans were overjoyed as an agreement between the MLS and owners of Oakland Athletics baseball team were given a three-year option to build a soccer-specific stadium in the San Francisco Bay Area. After almost an entire year without an MLS side, the San Jose Earthquakes were being rebuilt, as a new San Jose Earthquakes expansion to the MLS was being started.

The return was complete in 2007 the team announced that Buck Shaw Stadium would be used as a temporary home for the 2008-2010 seasons, although some of their matches were played in the McAfee Coliseum in Oakland. To cause more joy to the Earthquakes fans was the announcement that Head coach Frank Yallop would be reinstated to the dugout for the Earthquakes. Yallop made some key signings for the Earthquakes during his tenure, Darren Huckerby and Ronnie O’Brien were key to the team’s success, with the former winning MLS Newcomer of the Year.

In 2010 the Earthquakes were almost back to their best on the pitch. The Quakes qualified for the playoffs with 46 points but were unable to go all the way to the title and were knocked out in the semi-finals by a 1-0 defeat to the Colorado Rapids. The following year the Quakes, however, were unable to repeat the success and failed to qualify for the play-offs.

This season disappointment seemed to motivate the Quakes though and in 2012 had the best ever start to an MLS season. Their ability to come back late in matches prompted striker Steven Lenhart to proclaim, “Goonies never say die” in reference to the Goonies film. This came after the team scored 3 goals in less than 20 minutes to beat rivals Los Angeles Galaxy 3-2. The proclamation became a stable chant by fans of the team.

Despite being knocked out in the play-offs the 2013 season ended with silverware for the first time since the teams return. The Earthquakes won the Supporter’s Shield, qualifying them for the CONCACAF Champions League for the first time in the team’s history. In 2014 San Jose won their CONCACAF group on goal difference with wins over Montreal Impact (Canada) and Heredia (Guatemala). Although, they would not go any further after losing to eventual finalists Toluca on penalties. The added pressure of continental football took its toll on the squad which meant they failed to qualify for the Play-offs in the MLS.

Due to the form of the team in the domestic league, the Earthquakes re-appointed Dominic Kinnear as head coach. If this wasn’t enough to get fans excited after a disappointing season their new stadium, the Avaya Stadium was opened in March ready for the Earthquakes to use. The 2015 season saw the Earthquakes start to climb back to the Play-offs. Although not qualifying for them, Chris Wondolowski became the 9th player in MLS history to score 100 goals in the competition. The failure to qualify for the Play-offs saw a change at the top of the club. John Doyle was replaced as General Manager, he was replaced by Jesse Firoranelli.

Fioranelli made some drastic changes to the philosophy of the team, the Italian prioritised youth players and scouting abroad, with the focus of bringing in more dynamic and attacking players. The new boss outlined the necessity for the team to qualify for the Play-offs in the 2017 season, as the team had not done so since 2012. Fioranelli replaced Kinnear with Chris Leitch, the club’s former interim general manager and brought in Covelo as his assistant coach. The move seemed to pay off as San Jose won their first-ever U.S. Open Cup game against an MLS side, this saw them qualify for the USOC quarterfinals, the first time since 2012. The Earthquakes ended up making it all the way to the semi-finals, where they lost to Sporting Kansas City on penalties. The Earthquakes also qualified for the MLS Cup Playoffs; however, they were knocked out by the Vancouver Whitecaps in the knockout round.

In November of 2017, the Earthquakes had a new head coach, Mikael Stahre was appointed to the role and Leitch returned to the role of club technical director. The move did not work well. Stahre was fired by the club before the end of his first season. The Swede ended his time in San Jose with a record of only four wins. The team moved to replace him with esteemed coach Matias Almeyda. The Argentine has won the CONCACAF coach of the year award and would take charge for the 2019 season.

Almeyda made very small changed to the playing staff but completely revolutionised the playing style. It didn’t start well in the MLS season as they succumbed to a four-game losing streak. The team’s fortunes changed drastically before the start of their fifth match against Portland Timbers. Academy talent Tommy Thompson declared that “we’re going to fix this!” before the match started. The Quakes won the game and went on an incredible run of 11 wins and 3 draws in 18 games and a 12-game unbeaten run at the Avaya stadium, making it a fortress. Unfortunately, thee run came to an end and the team finished as the best team outside of the play-off spots for the third time in seven years.

Earthquakes legend Chris Wondolowski broke the record for MLS goals that season, surpassing the 145 goals scored by former San Jose player Landon Donovan. Cementing his place in the history books, not just of the San Jose Earthquakes but of all the MLS.