The New York Jets have announced they will release cornerback Darrelle Revis. Revis had one of his worst years as a pro in 2016 and was recently arraigned on five criminal charges that came from a physical altercation in early February. All of this spelled the end of "Revis Island" in New York.

End of a nightmare year for Darrelle Revis

2016-17 was a nightmare year for Darrelle Revis; on and off the field. This season Revis was going to account for $15.3 million against the cap, something the Jets were not willing to spend on Revis as his career has been declining. By cutting the former first-round pick, the Jets will save roughly $9 million this season. On the field Revis struggled mightily at times giving up big games to some of the NFL's elite receivers including A.J Green and Antonio Brown. Off the field it wasn't much better for Revis.

Revis' release comes just 11 days after he was charged with four felonies, including aggravated assault, stemming from his alleged role in a street fight in his hometown, Pittsburgh. He's due in court March 15 for a pre-trial hearing.

Reaction from the Jets and Revis

Jets owner Woody Johnson released a statement in which he proclaimed Darrelle Revis as one of the best to ever wear a Jets uniform.

"Darrelle Revis is one of the greatest players to ever wear a Jets uniform. His combination of talent, preparation and instincts is rare and helped him become one of the most dominant players of his generation. I appreciate Darrelle's contributions to this organization and, wherever his career takes him, his home will always be here with the Jets."

Revis took to twitter to say his goodbyes to the Jets organization as well as their fans. 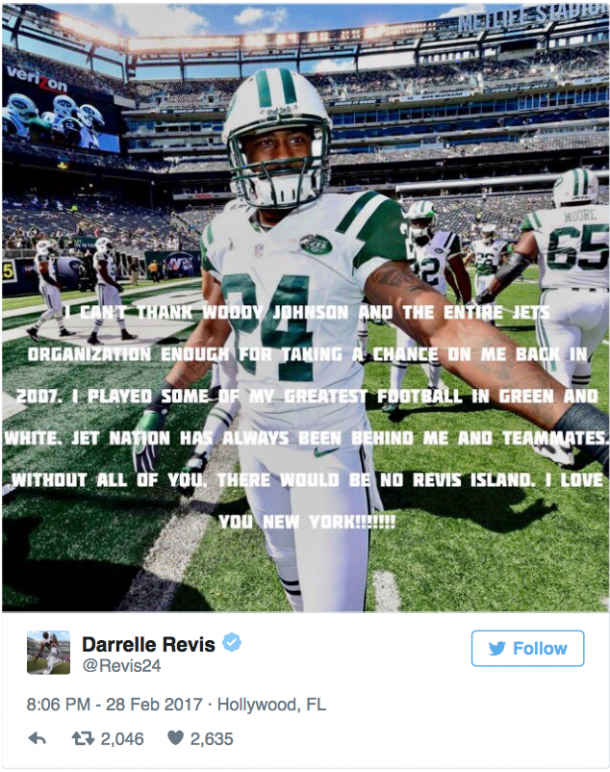 During his prime, Revis was one of the NFL's elite cornerbacks. He was named to seven pro bowls and four first-team All-Pros as well as winning a Super Bowl ring with the New England Patriots in 2014.

What's next for Revis?

After an abysmal 2016 campaign it is unknown whether or not Revis will return for a 10th season. If he does, he will likely find a new team, although the market for him won't be as strong as it once was.

No matter what happens next year, football fans everywhere will look back and realize that for the past decade they were able to watch one of the most competitive and greatest cornerbacks the NFL has ever seen.

Derrick Henry runs the Titans atop the AFC South&nbsp; 5 days ago