It was an interesting duel between the North Carolina Courage and Utah Royals FC, both teams looking to improve after the losses both suffered last week.

Utah started its season with three wins, while North Carolina had two wins and one tie before both lost last week. Also, the Courage never won over Utah so far, with the history of one tie and a loss for the Courage. And this game kept that trend.

North Carolina created chances in the first minutes of the match but Utah, with a brilliant Vero Boquete orchestrating the game in the middle of the field, started to take the match in control. The Spanish player proved to be the highlight for Utah once again, creating chances and passing the ball with inteligence to her teammates.

The Courage goalkeeper, Katelyn Rowland, didn't do much to stop the ball but the most likely reason is that she misjudged Rodríguez shot, thinking it was going wide. Nonetheless, the credit went to the Royals for that buildup.

After the early goal, the Courage started to take possession of the ball and the game, with Lynn Williams, Debinha and Kristen Hamilton taking the lead in the attack.

The Courage attacked over and over again, with Utah defending the final third. They kept the high pressure and took control of the second half. So much work saw its results in the 78 minute when Elizabeth Eddy scored the equalizer for the hosts. Jaelene Hinkle put a long ball in the feet of Debinha and the Brazilian flicked the ball to Eddy, who was waiting near the post and with just one touch put it in goal. 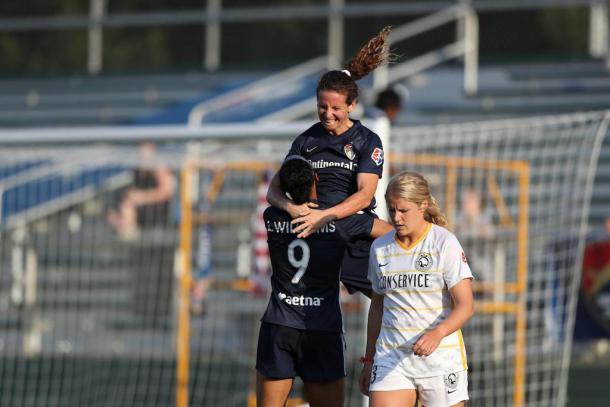 The Courage attack concentrated on the wings, taking advantage of the speed of their wingers, but the final touch just wasn't there. The Courage outpaces other teams in athleticism but is lacking of ideas in the final third. And this was expected, given the fact that their most creative players aren't available right now. Krystal Dunn was the most explosive players and the creator of the Courage and the team is missing her creativity as much as is lacking of it.

Lynn Williams was the most active Courage player in the attack but the duels with Nicole Barnhart didn't help much to her confidence since all of them were won by the experienced goalkeeper of the Royals.

We already mention Vero Boquete, who is like a breeze of fresh air in the morning for the league and the Utah team. Players like her, so creative and intelligent on the ball, aren't easy to find and the fact that we can enjoy her and her game during these World Cup months are a true privilege.

But if something this game proved something: Boquete still needs a partner in crime. She has been creating a good partnership with Rodríguez but she's not a creator but a more of a finisher. And when the Courage covered Boquete in the second half, Utah desappeared. That's something coach Laura Harvey will want to work on for sure.