Sara Errani will not enter the third Grand Slam of the season on a high a note. The Italian is on a six-match losing streak and it is common knowledge that grass is her least favorite surface. On the other side of the coin, she is arriving at the All England Club without pressure and high expectations on her shoulders. So, this is an analysis of the Italian's state before the third big meeting of the season.

The 29-year-old since her breakthrough year in 2012 has been a regular member of the world's top 20, always finding results that keep her high in the rankings. However, this year, except for an unexpected run in the Middle East, has not gone well.

As 2016 began, the Italian made it to the Apia International Syndey quarterfinals, where she fell to eventual champion Svetlana Kuznetsova. Though, despite seeming prepared, she saw the door of exit in the first round of the Australian Open to Margarita Gasparyan for the first disappointment of the season.

Continuing into the rest of the hard court swing, she lost early in both of the US Premier Mandatories and in Doha. However, there is one result that stands out. In a tournament where all the seeds lost their opening matches, the Bologna native took advantage of the wrecked draw to win her first premier title in Dubai, quite surprisingly on hard courts. This is the result that has actually saved her season.

Like this, the French Open 2012 runner-up would enter her favorite part of the season, clay court swing. Kicking off in Charleston, the Italian made the semifinals, showing once again that she should not be taken for granted on the dirt. As the European swing started, she struggled with injuries in both the Fed Cup and Stuttgart that forced her to withdraw. In the rest of the clay swing, she did not manage to win a match and subsequently she was out in another slam first round, this time in her favorite one, the French Open.

The clay court season was a major disappointment for the Italian. She failed to win a match on red clay, where she always plays her best and wins many ranking points. As a matter of fact, there are a lot of question marks for Errani and her career status. 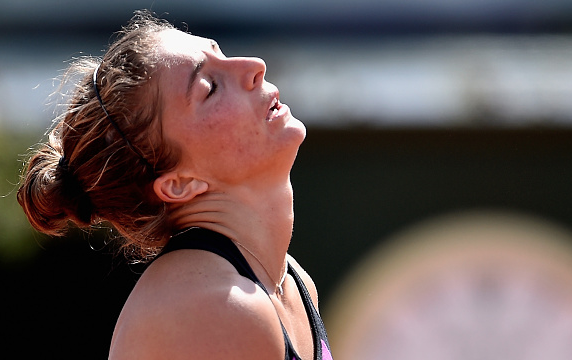 Sara Errani entered in just one grass court tournament before Wimbledon, this week in Eastbourne, where she lost her second round match to Andrea Petkovic after a bye in the first round. It is logical for the Italian to keep her grass season short, as she does not like grass and she does not win many ranking points on it.

In terms of her history in the only grand slam played on the lawn, it is poor. Wimbledon is by far her worst grand slam tournament. At her best showing, she made the third round in 2010 and 2012. In 2012, she lost to Yaroslava Shvedova suffering the loss of a set in which she did not win a point, a golden set. This was an embarrassing performance considering the Italian was a top ten player back then.

Last year, she made the second round beating fellow Italian Francesca Schiavone before losing to Aleksandra Krunic.

The worst spell somebody could cast on Sara Errani is to force her to play the whole season on grass. Errani's game style and grass play style are moral opposites. The Italian sheds her hopes on getting her opponents trapped in long rallies with her variety and dragging errors away from them. Also, with her serve being a significant weakness she has to rely on her return and that means struggling against good servers. It is evident that she lacks the power that grass court tennis demands.

Nevertheless, one thing that remains the same in every surface is the player's mentality. Errani is a fighter and she will go out there to fight for every point and every game and that tells a great deal why her counterparts should not underestimate her.