Johanna Konta reached her first final of the year at the Sydney International after defeating Eugenie Bouchard who had been playing some inspired tennis this week. The Brit started strong being the first to break and even if the Canadian tried to get back into the game, Konta stayed strong and after one hour and eight minutes, the Brit sealed her win over Bouchard 6-2, 6-2. In the final, she will face Poland’s and second seed, Agnieszka Radwanska.

The match started with both players holding their serves without facing any break points. The Brit struck first in the following game after the Canadian already had saved one break point, Konta hit a return that Bouchard was not able to hit back. However, Bouchard was far from being done as she immediately broke Konta back to stop her from extending her lead and level the scoreboard at 2-2. Just when the Canadian seemed to get back into the game, Konta recovered the lead after hitting a forehand that would put her 3-2 up. 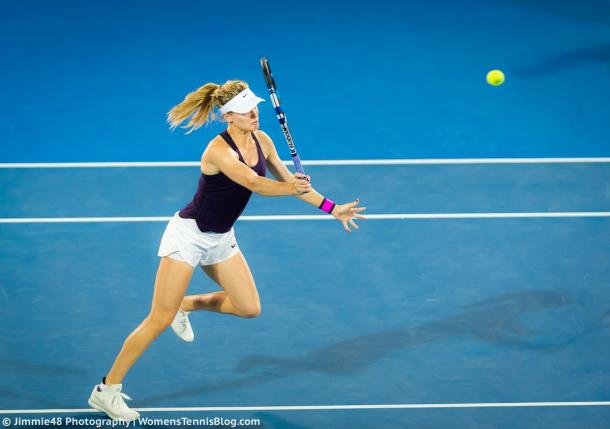 Once again, Konta had a grueling battle to hold her serve and confirmed the break. Saving two break points, the Brit learned from her previous mistakes and this time she held to lead 4-2. After the disappointment of not being able of converting those break points, Bouchard was broken again after a stunning cross court return winner from Konta to break to love and now serve for the first set. The sixth seed held her nerve as she only lost a point on her serve before Bouchard hit a return that went wide to take the first set 6-2.

Konta proves to be too strong for Bouchard

After an almost flawless first set, Konta started the second in the same way as she won her five games in a row after breaking Bouchard in the first game. Just like she didn’t struggle to break, the Brit didn’t face problems to get a solid hold to love and confirmed the break, leading 2-0. A weak serve from the Canadian and a great return from Konta secured her a second break to be up 3-0, but Bouchard was ready to fight back as she played her best game so far in the set, recovering one of the breaks after hitting a powerful forehand that Konta hit to the net. 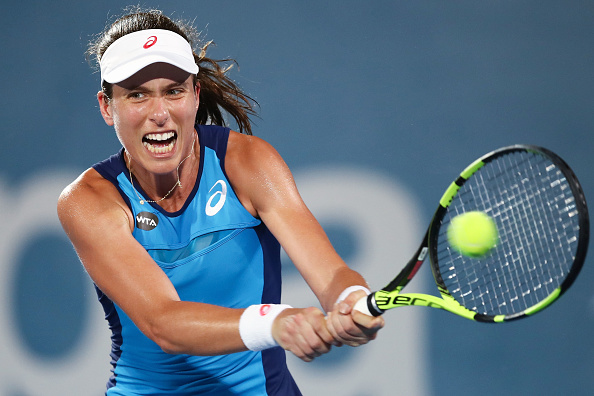 Now on the scoreboard, it was time to see if Bouchard could continue building a comeback but Konta proved to be a strong opponent and gave the Canadian a tough battle in which the Brit forced four deuces to eventually take the only break opportunity she got in the game and lead 4-1. This time, Konta wanted to keep the two breaks lead and she did after a great hold to love to be one game away from the big final. The Canadian didn’t give Konta the pleasure to win the match on her serve as Bouchard held her serve for the first time in the set but still down 2-5. With the same intensity she played the whole match, Konta played this deciding game in which she only lost one point before she fired up a powerful serve that Bouchard sent beyond the baseline to seal her win and book a spot in the final.

In the final, Johanna Konta will face the second seed, Agnieszka Radwanska. The Pole defeated Barbora Strycova in her semifinal match in straights sets. Konta and Radwanska have played each other on two occasions, both happened last year and in both meetings, it was the Pole who got the win. Their last encounter was in another final, this time in Beijing where Radwanska won in straights sets.

French Open: Andy Murray to look for answers after "worst defeat at a Grand Slam"a day ago