Ben Stokes hit a stunning 102* to help England to a 40-run Duckworth-Lewis victory over Australia, knocking out their fierce rivals in the process.

Backed by a vociferous Edgbaston crowd, Stokes and Eoin Morgan joined forces at a time when the Australian pace attack was well and truly on top, with the score at 35-3.

Yet, as predecessors of years-gone-by may have been, they were not besieged by fear, and put on a counter-attacking partnership of 159 to take their side within the reach of victory.

Rashid and Wood star with ball 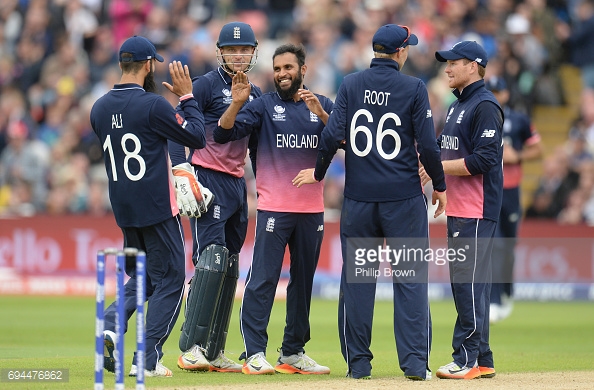 The tourists were asked to bat first, and they made a solid start: openers David Warner (21) and Aaron Finch (68) reached 40 without loss quite comfortably, before the dangerous Warner edged a Mark Wood delivery into the gloves of Jos Buttler behind the stumps.

Finch and Steven Smith (56) then set Australia a platform from which they should have capitalised, looking in little danger as they comfortably added 96 together, taking their team to 136-1.

Shortly after reaching his half-century Finch fell, mis-timing a drive off Stokes (1-61) straight up in the air, from which Morgan took a steepling, swirling catch.

New man Moises Henriques (17) hit a couple of well-timed shots - the first a cracking cover drive, the second a swivelling pull - before he too was dismissed, scuffing an attempted shot off Adil Rashid (4-41) over mid-wicket into the hands of Liam Plunkett at mid on.

Smith added a 17th ODI fifty of his career, and when he departed with scoreboard on 181-4 with the best part of 18 overs left, his side looked like were are about to set a big score.

Alas, the middle-order did not cash in, and despite Travis Head and Glenn Maxwell (20) putting on 58, Maxwell’s dismissal proved to be the catalyst for an untimely collapse.

Having been dropped two balls previously, he smashed a short Wood delivery towards mid wicket; from there, Jason Roy pulled off an astounding catch right on the boundary.

Holding onto the ball high above his head, he somehow kept his balance, throwing the ball back into the air when he moved over the rope, to then nonchalantly step back inside he field, and take the simplest of catches.

Rashid then proceeded to clean up the tail, in a remarkable spell of three wickets in ten balls.

The leg-spinner was impressively economical early on, his first seven overs going for a mere 26 runs; and when he returned, he picked up the scalps of Matthew Wade (2), Mitchell Starc (0) and Pat Cummins (4). Astonishingly, he was not hit for one boundaries in his ten overs.

Along with Durham seamer Wood (4-33), who took his best ODI figures to date, the two tied the Australians down, and prevented them from reaching the big total they looked set to achieve.

The tourists were indebted to the late hitting of Head to take them to a respectable target, with the South Australian ending up on 71* off 64 balls, out of a total of 277-9. 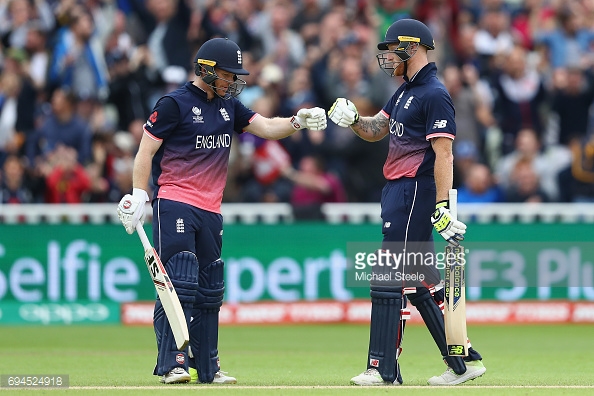 England suffered a nightmare start however, and after Jason Roy (4) was lbw to Mitchell Starc (1-52) and Alex Hales (0) edged to slip off Josh Hazlewood (2-50) - both before the culmination of the second over - there were plenty of nerves around in the cloudy Birmingham air.

When star batsmen Joe Root (15) nicked behind off Hazlewood soon after, the rain-break that followed could not have arrived at a better time for the home team.

After the weather had cleared, Morgan and Stokes played in a manner so typical of the approach taken by England during the past 18 months - and so alien to those associated with English cricket prior to 2015.

Starting as he meant to go on, Morgan danced down the track to the first two deliveries after the break, smashing both to the cover boundary.

Both reached 50 in what appeared to be no time, with Stokes in particular reaching his off 39 balls - yet when he consider the fact that 20 of those were dots, he accumulated 52 runs off just 19 deliveries.

The pair soon passed the required DLS par score, meaning from then on in, should the weather intervene again then victory would be theirs.

They treated the Australian pace bowling attack, generally considered to be the best in the world, with disdain, swotting anything short, driving anything full.

The 100- and 150-run partnerships were soon achieved, and neither looked like they would be removed, both batting with an arrogance, a strut, a look of confidence only displayed when you know you are at the top of your game.

It appeared that the only fathomable way either would dismissed would be through a run-out, and that is exactly how it happened. A mix up caught Morgan ball-watching and Stokes charging through, meaning the captain was sacrificed for the cause.

Jos Buttler ensured Stokes could reach his third one-day international hundred, with the dynamic duo guiding their country towards the target with minimal fuss.

When the second downpour did arrive, it soon became apparent that any further play would be impossible. The only disappointment is that a game of such excitement had to suffer a somewhat drab ending.

England will not mind, becoming the only side to enter the last four undefeated. Whilst Australia can of course feel somewhat hard done by by the weather, they had their chance to qualify on Saturday, but did not turn up. Their only queries should be with their own performance.