Today’s lesson in history starts with me in the eternal city, Roma. My family, girlfriend, and I visited the Italian capital last summer. It was a sticky, hot May afternoon as the group of us stood in the shadows of the Roman Coliseum’s towering walls, inching along like slugs in the busy tourist queues in order to enter the daunting stadium. Taller than most, I utilized my six foot frame to survey the wait above the masses of people blocking our path, all of which were fanning themselves and presumably complaining with their shoulders slouched. Tourists from all corners of the globe were discouraged by the stagnant pace of the line. Not far ahead lingered a group of college-aged travelers, impatiently waiting their turn like everyone else. The hair on their head was dark and thick, their skin, a creamy complexion. The cartel babbled on rapidly in a language I would have never been able to identify if it wasn’t for their matching red and white striped shirts.

Basques! I thought to myself. It was the day of the 2012 Copa del Rey final back in Spain and Athletic Bilbao were staring bravely into the belly of the beast, FC Barcelona. The crew had all worn their kits out and about in support of their cherished team. Unfortunately, all the support in the world wasn’t going to thwart Barcelona at their best. Two goals from Pedro with a Messi strike in between all but ended the game just 25 minutes in; it finished 3-0 to the Blaugrana.

The famous stripes of Athletic represent the Basque Country’s flagship club. They are commonly referred to as Los Leones on the Iberian Peninsula, but many outsiders don’t know why. Well, I’ll tell you.

This past season was the last for one of Spain’s most infamous and historic grounds, La Catedral, San Mamés, named for the church which it neighbors in northern Spain. “San Mamés,” for those of you who don’t speak Spanish, translates to Saint Mammes. Now, who is Saint Mammes and why the hell does this matter? Get in your time machine, and punch in the third century A.D.

Saint Mammes was a resilient fellow who was tortured for his entire life for upholding his faith in the Christian belief. In fact, he was so devout that he was sent in front of Roman Emperor Aurelian, where he very well might have seen the same ancient structure which the Bilbao fans and I were stood under, within roughly 200 years of its construction. He was then tortured again and sent back to what is now present day Jordan. There, the saint was tossed in the lions’ den to be executed, but when the chamber was reopened, the lions had not eaten Mammes - A miracle! Hence the nickname, the Lions, Los Leones. According to the Guardian, there is an actual stuffed lion in the director’s box at La Catedral! It’s safe to say that one won’t be eating anyone either.

Furthermore, the club’s strict policy of Basque-only players renders the nickname fitting, a policy as brave as a lion itself. Since the club was established, only players from Euskadi, or Basque Country as we know it, have been eligible to play for the team. Chivas de Guadalajara of Mexico uses a similar practice; they only allow Mexicans to play for their club. Nonetheless, the Basque Country isn’t recognized by FIFA nor international law as its own state, and despite its uniqe culture, it is still part of Spain. Athletic Bilbao’s current players can only be called up for the Spanish national team. That is except for one.

Aymeric Laporte is a 19 year-old central defender from Agen, France and is only the second ever French-born player to play for Bilbao. But if the Basque Country is in Spain, how can he play for Athletic and France? The answer is this: the historical Basque Country is an area that stretches beyond the recognized border between France and Spain. However, the majority of its land resides in Spain. The other Frenchman to claim a Basque acknowledgment and represent Athletic Bilbao is retired left fullback Bixente Lizarazu, World Cup winner with France in 1998 and European Championship winner two years later. But the Bayern Munich legend only made 16 appearances in his one season at Bilbao. 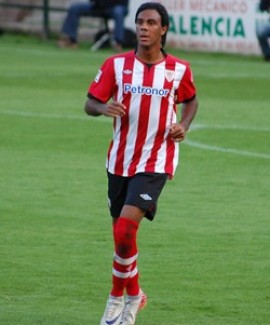 Though the Basque-only policy is still alive and well at Athletic, a remarkable sight could be admired at Sevilla’s Sánchez Pizjuán in 2011. Jonas Ramalho at the age of 19 became the first black player to ever play for Athletic Bilbao. According to an article about his historic moment from Sports Illustrated, Ramalho’s debut helped to extinguish the myth that Athletic Bilbao wouldn’t sign black players because of the color of their skin.

The times may be catching up with Bilbao, but their pride in their culture is what drives them forward. Los Leones are one of three remaining teams to never have been relegated from Spain’s top flight (you guessed it, Real Madrid and Barcelona are the other two). In Athletic’s 114 year history, they’ve won the league on eight occasions but haven’t done so since 1984, when they did the double by winning the Copa del Rey as well. Since then, however, trophies have sadly evaded Bilbao. All the same, it’s not for lack of effort. The team reached the Copa del Rey final in 2009 and 2012 only to fall to Barcelona in both matches.

The Copa is a tradition that runs thick in Bilbao’s supporters’ veins. They’ve raised the trophy 23 times, making them the second most successful club in the tournament’s history, higher than Real Madrid even, who only have 18 triumphs. And if they had beaten Barcelona in 2009 and 2012, they’d have more than them too!

The football club is the region’s greatest medium to represent its bold and proud heritage. It means that much more to claim scalps over other teams in Spain, in particular Real Madrid, because of the events related to former dictator Francisco Franco. While at large, Franco attempted to unite Spain under everything that is Spanish, NOT Basque, not Catalán. Subculture regions like the Basque Country and Catalonia suffered persecution under his rule. Even in the present day, nearly 38 years since the death of Franco, bad blood still boils amongst many of the Basque Country’s inhabitants.

Questions have been raised regarding Athletic Bilbao’s traditions in the last decade. Once a powerful contender in Spain, they, like the rest of Spain’s clubs, haven’t been able to compete financially nor from a footballing standpoint at the same consistent level as Real Madrid and Barcelona. As a boisterous Athletic fan may assure you, the talent is so ripe in the Basque country that the results will keep coming, but their Basque rivals, Real Sociedad, were the ones having all the fun this season. Real Sociedad once had a Basque-only policy of their own but abolished it in 1990. I’m sure nothing illustrates cultural betrayal like a Sociedad supporter in the minds of Los Leones faithful, but you can’t help but notice La Real’s success this year, finishing fourth and qualifying for Champions League football. Selling their soul to the Devil? Who knows? But it must have been humiliating for Bilbao to lose the very last Basque Derby at San Mamés to their adversaries 3-1.

In Spain, Athletic Bilbao are historically a big club. But will the evolving face of football outgrow their old-fashioned traditions? Even if the Basque region produces superstars, bank-shattering bids for the game’s heavy weight punchers will leave Athletic with no choice but to accept. Then, with pockets full of cash, Los Leones will only be left to buy players from a very limited stock of footballers. Fernando Llorente was enormously out of favor with Marcelo “El Loco” Bielsa this campaign and will play for Juventus next season, while the likes of Javi Martínez was already snatched up last summer. Martínez won the treble with Bayern Munich this season. Who is next to go? Iker Muniaín? This season’s leading scorer, Aritz Aduriz? Back in the 2006-2007 La Liga season, Athletic Bilbao narrowly escaped relegation by a measly point – too close of a call by anyone’s standards. They will want to hold on to all the talent they can to avoid that spooky scenario again.

The club is undergoing a transition heading into next season. Apart from a new manager, a change of scenery is to take place. For the first time in 100 years, Athletic will be calling a new stadium home, San Mamés Barria. Right next door to the original La Catedral, the ground holds 54,000 fans, over 14,000 more than the stadium before it. No doubt it will show off a more modern design, but Athletic Bilbao will be carefully hoping to reestablish the same frightening atmosphere they are so accustomed to providing. Away at Athletic Bilbao is a fixture in La Liga that no team is happy about. Not Real Madrid, not even Barcelona. The La Liga Champions, Barcelona, as spectacular as they were this campaign, only managed a 2-2 draw in their last trip to La Catedral. Matter of fact, the same thing happened to Messi and co. the previous time they knocked on Athletic’s door – another 2-2 draw. In that same season, 2011-2012, the great Manchester United couldn’t win there either when they were in town for the Europa League third round second leg; Bilbao emerged victorious by beating the Red Devil’s 2-1 in the lion’s den and astonishingly 3-2 at Old Trafford. Marcelo Bielsa’s men reached the final of the Europa League that season. But to the dismay of the fans, Los Leones lost 3-0 to Atlético Madrid, a familiar score line from the Copa del Rey final match with Barcelona in the same season – a heartbreaking end to an exciting year.

In conclusion, San Mamés and his lions will live on in the name of the new stadium, and those all so familiar to the cigar-scented waft of La Catedral will be continue to follow the club’s rigorous doctrine, Basques only. But with the winds of change blowing across every football pitch in Europe, will their dated traditions succumb to the practices of the modern game? Or will the Basque Country’s talent rise to the challenge, propelling Athletic to not only success but more importantly, survival in the top flight. The philosophy hasn’t failed so far, so who are we to doubt them now? 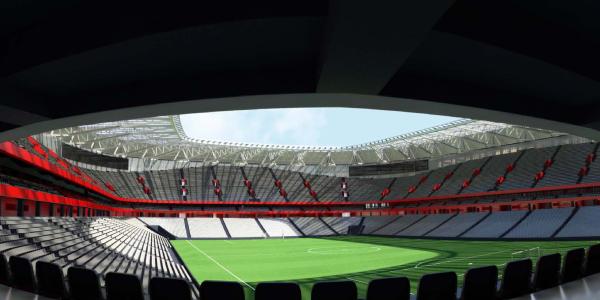 Barcelona 0-0 Atletico Madrid: Neither side make decisive move as advantage shifts to Real in title race 5 months ago
//