Radamel Falcao was one of the most wanted strikers in the world this summer, before AS Monaco snapped up the Colombian for around 50 million. The transfer came as a shock as it seemed the former Porto striker was destined to sign for Real Madrid.

Falcao had an outstanding 2012/13 La Liga campaign, scoring 34 league goals in 40 league appearances. He was an integral part of the Atletico Madrid side which defeated Real Madrid in the Copa Del Rey final, to win the trophy for the first time since 1996.

Although Monaco seemed confident in the Colombian living up to the huge price tag, it seems that the French club may have gotten more than they bargained for in the deal. This next paragraph shows a quite unusual lie made by Falcao quite some time ago. 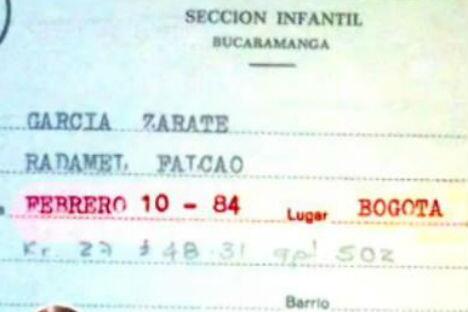 Former Inter and Partizan Belgrade player, Taribo West, was also accused of committing a similar offence earlier this year. Ex-president of Partizan, Zarko Zecevic, stated: "He joined us saying he was 28. We only later found out he was 40, but he was still playing well so I don’t regret having him on the team."

Barcelona 0-0 Atletico Madrid: Neither side make decisive move as advantage shifts to Real in title race 20 hours ago

Werder Bremen 0-0 Bayer Leverkusen: Honors even at the Wohninvest Weserstadion a day ago

Bayern Munich vs Borussia Mönchengladbach match preview: How to watch, kick-off time, team news, predicted lineups, and ones to watch 2 days ago

Werder Bremen vs Bayer Leverkusen preview: How to watch, kick-off time, team news, predicted lineups, and ones to watch 2 days ago

Borussia Dortmund vs RB Leipzig preview: How to watch, kick off time, team news, predicted lineups, and ones to watch 3 days ago

Analysis: Determination in defence was key to Man City's defeat of PSG 4 days ago

Mainz 1-1 Hertha Berlin: Honors even at the Opel Arena 6 days ago