Heroics in the penalty shootout from back-up goalkeeper Will Huffer sealed a place in the World Cup for England U17 in their play off place against Spain U17.

Following 80 minutes of two entertaining sides cancelling each other out, the Leeds United goalkeeper came on for the injured Paul Woolston and made himself a hero in the ensuing penalty shootout.

A save from Dani Olmo was all the difference for England who will now travel to Chile for the U17 World Cup in October. 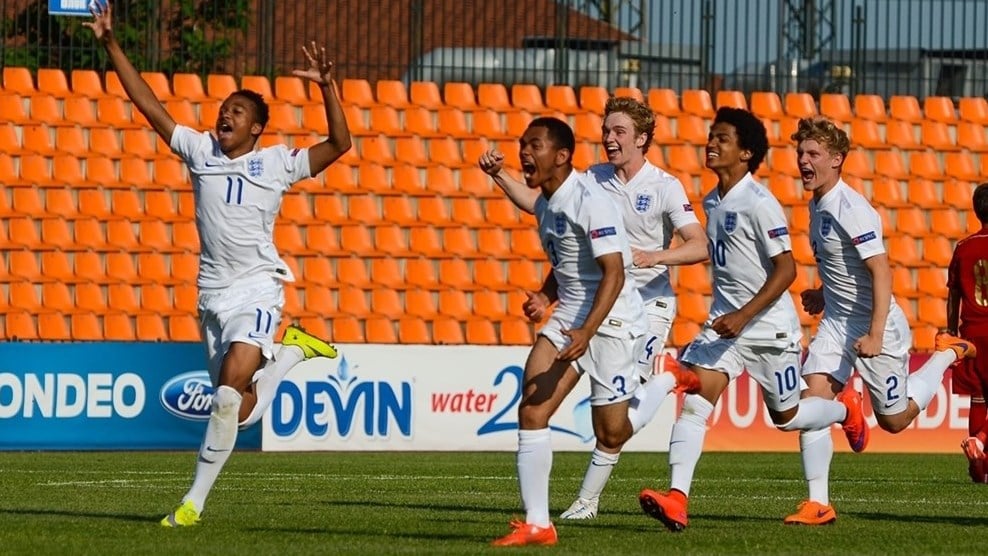 The Spanish, kicking off the play-off game in Bulgaria, knew they would have to defend resolutely to stop Marcus Edwards from scoring in John Peacock's attacking 4-1-2-2-1 formation. Yet they produced the first attack as Woolston was forced into an early save from Kuki.

That attacking intent shown from the start built a premise for the next 80 minutes of football as England responded with Herbie Kane whose stinging shot was parried away by Inaki. Jay Dasilva pounced on the loose ball and Inaki had to save again.

Everyone expected Edwards to be the key man for England after his two goals in the group stages secured wins over both Republic of Ireland and Italy. He proved to be so as his curling effort was tipped just over the bar by a busy Spanish keeper.

Dani Olmo disappointed in terms of finishing for Spain as he hit wide from 10 yards. His side continued to press the England box as they grew into the game better. Peacock's Young Lions had changed game plans after their European Championship exit.

In the group stage and quarter-final, England created huge amounts of half chances but had an awful conversion rate and couldn't get close to finishing chances off. In the opening 20 minutes of this play off game, chances came less often but provided more oos and aahs because they were closer, better and near to getting past Inaki.

Possession was England's in the first half and so were set pieces as Spain got frustrated without the ball and committed fouls. Fran Villalba had a shot blocked before giving away a free-kick but consistently, like in the tournament, England failed to make something for set pieces coming their way.

Trent Arnold had a good chance to put the Young Lions in front after Layton Ndukwu's lay off but Inaki wasn't troubled as his effort rolled wide.

Kuki had a fantastic chance for Spain as the first half came to a close. Villalba accelerated down the left flank well and delivered a pin point, low cross for Kuki who couldn't connect with it and turned his head away in disappointment.

Ndukwu powered down the same left flank as the second half began, yet his shot - more similar to a cross - missed the target.

Moments later his shot was easily caught by Inaki in goal for Spain. Chrissy Willock took to the left side as well and only a handful of his shirt from Kuki, earning a booking, stopped him from moving in to the box.

Willock powered down the flank again, this time getting round his marker and driving a low shot at Inuki but it slipped wide of the goal.

A Spanish set-piece proved troubling for England as it pinged in the crowded box. Woolston eventually gathered it before Kuki had another chance, heading over this time.

Daniel Wright and Ike Ugbo came on for Arnold and Ndukwu as Peacock tried to use fresh legs to get past a solid Spanish defence who were now looking the better side.

Penalties looked ever the only option until Spain put the ball in the English net. A lofted free-kick with 8 minutes to go was headed past a floored Woolston by Jose Maria Amo. 6 minutes later, nothing had been played as the officials consulted each other over whether to award a goal or a free-kick for the floored and injured Paul Woolston. They decided on the free-kick.

Will Huffer replaced him and played for eight minutes with only one thing on his mind as the hero status, the dream of being the man to take his side to the World Cup played over in his mind.

He said earlier in the Euros that he wanted to be the Tim Krul for England. That wish couldn't have got much closer.

Marcus Edwards, ever-present for England in the tournament, netted the first penalty only for it to be canceled out by Pepelu.

Willock, Villalba, Oxford and Alex Martin all scored for their sides as the Easah Suliman put it on the spot to secure the World Cup place for England.

That he did with a rocket of a penalty in the top corner as the English side, expected to do far better in the European Championships, made the World Cup - a tournament in which they will be seen as one of favourites.

Huffer, meanwhile, will take two GCSEs on Wednesday and will be revising on the bus home!