In a move that may come as some surprise for many, former FC Ingolstadt 04 defender Konstantin Engel has left Germany to return to Kazakhstan.

Engel, who was born in Karaganda in what was then the Kazakh SSR, has signed for two-times champions FC Astana, as confirmed by the club on Friday.

In doing so, he snubs former club VfL Osnabrück with whom he had been training with a view to a possible move.

The 28-year-old left the Bavarian club in the summer after three years. Despite frequent appearances for the club before its promotion to the Bundesliga in 2015, he played just four times last season, and so his departure came as little surprise.

He had started his career at Osnabrück as a youngster, and in five years there he made 74 appearances for the first team in the second and third tiers of German football.

He moved east in 2011 to play for Engerie Cottbus, playing 35 times before being let go in 2013, eventually signing for Ingolstadt as a free agent that September. 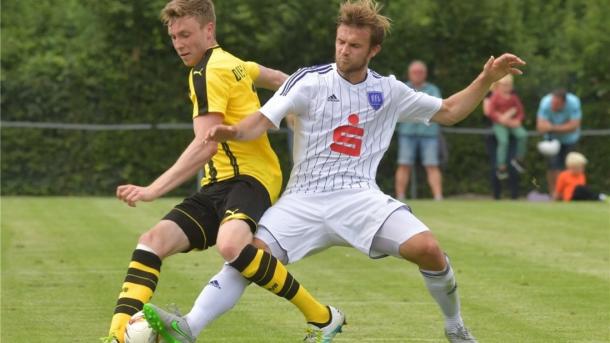 Engel had been training, and playing, for his former club for over a month, however he had been keen to keep his options open, with a view to a move in either the Bundesliga or 2. Bundesliga.

However Engel, who has won 11 caps for Kazakhstan, has signed for the club that was knocked out of UEFA Champions League qualifying by Celtic this week.

Speaking before the transfer went through, Engel said “I thank VfL Osnabrück for the great shot in training and the interest in a transfer.”

Engel will have to wait for his debut however. He was named as a substitute for his new club’s game against FC Shakhter Karagandy on Sunday, but did not make an appearance off the bench. They lost 2-0.