Mirjana Lucic-Baroni reached her first Grand Slam semifinal since 1999 with a 6-4, 3-6, 6-4 win over fifth seed Karolina Pliskova. The Croat had previously made the semifinals at Wimbledon 18 years ago.

The first chance of the match fell to Lucic-Baroni, a break point in the second game at 30-40, but Pliskova saved it with an ace out wide. She would break in the next game. At 30-40 with a Pliskova sailed a forehand long on her first opportunity, but on her second, Lucic-Baroni dumped a backhand into the net to give the Czech an early 2-1 lead.

It was the sixth game that saw Lucic-Baroni with opportunities to break. After missing a backhand return at 15-40, it was Pliskova's own backhand that floated just wide to return the set to even terms and give the 79th ranked player in the world the break, consolidated with an ace for a 4-3 lead to Lucic-Baroni.

The tenth game would decide the set as Lucic-Baroni would have 0-40 on Pliskova's serve. After the Czech saved the first, her wild forehand that went well over the baseline gave the Croat the opening set 6-4, halfway to a Cinderella semifinal appearance.

The second set saw breaks traded as Lucic-Baroni gained the upper hand when at 15-40, Pliskova sent a forehand long, the Czech off all night on that wing, but she would get right back on serve when the Croat missed four backhands to donate her serve and return the set to parity at 2-1.

After a six-minute medical timeout her right foot, Pliskova got herself back into the match with a hold and then a break of serve as Lucic-Baroni's backhand clanked into the bottom of the net to give the fifth seed a 3-2 lead.

The set would continue to seesaw back and forth as Lucic-Baroni immediately broke back only to see Pliskova take what turned out to be the decisive break of the set. At 30-30, the Croat double-faulted to bring up break point only to see wipe it away with an ace, but at deuce, a second double fault followed by a missed overhead smash put the reigning U.S. Open finalist in front 4-3.

The Czech was on the ascendancy and she capped her burst with a closing break to love, a stunning forehand winner at 0-40 wrapping up the set 6-3 and forcing this entertaining quarterfinal to a third and deciding set.

Lucic-Baroni quickly reversed the momentum, breaking to open the final set, a powerful forehand forcing a weak reply from Pliskova. She donated the break right back with a pair of double faults and a missed forehand, only to break again, a brilliant forehand winner putting her ahead 2-1, the server yet to hold in the third set.

A fourth break of the set came when Pliskova built a 0-40 lead and after Lucic-Baroni saved the first two break points, another errant backhand gave the Czech a lifeline back into the match. 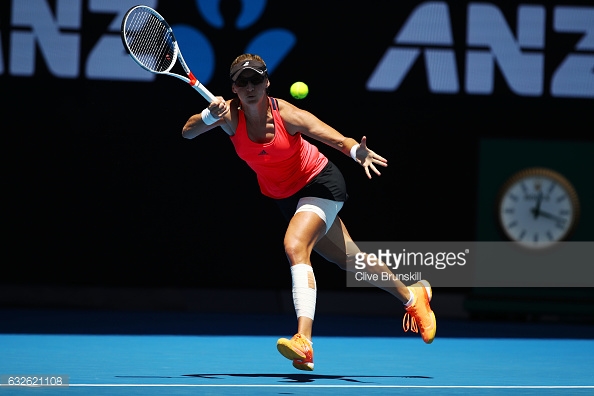 At 4-3, Lucic-Baroni took a medical timeout to get her heavily strapped leg treated. Following the brief stoppage, the Croat fired three aces in a 61-second game to hold, followed by the decisive game of the match, a break to love when Pliskova missed a backhand miles wide giving Lucic-Baroni a 5-4 lead.

Putting a rosary bead around her neck as she was preparing to serve for the match, she got to 40-15 when on match point, Pliskova dumped one final forehand into the net, Lucic-Baroni into the semifinals, dropping to her knees after shaking hands with her opponent and the chair umpire, an inspiring story to kick off the tennis season.

A tribute to Boris Becker and Steffi Graf 2 years ago