It’s been quite a year for Russia’s Evgenia Medvedeva.

Around this time last year, the two-time World champion and two-time Olympic silver medallist sent shockwaves around the skating world when news broke that she was leaving her longtime Russian coach, Eteri Tutberidze, to train under Brian Orser and Tracy Wilson at the Toronto Cricket and Skating Club.

In a difficult transition season that saw her uproot everything in order to move across the world with her mother, Zhanna, the Russian teenager certainly hasn’t had it easy. Speaking in a narrow hallway at the Scotiabank Arena ahead of this year’s Stars on Ice show in Toronto, a relaxed Medvedeva reflected on her first season with her new coaching team, her newfound love for Canada — which she considers solely her new “work” home — and her first time touring in North America. 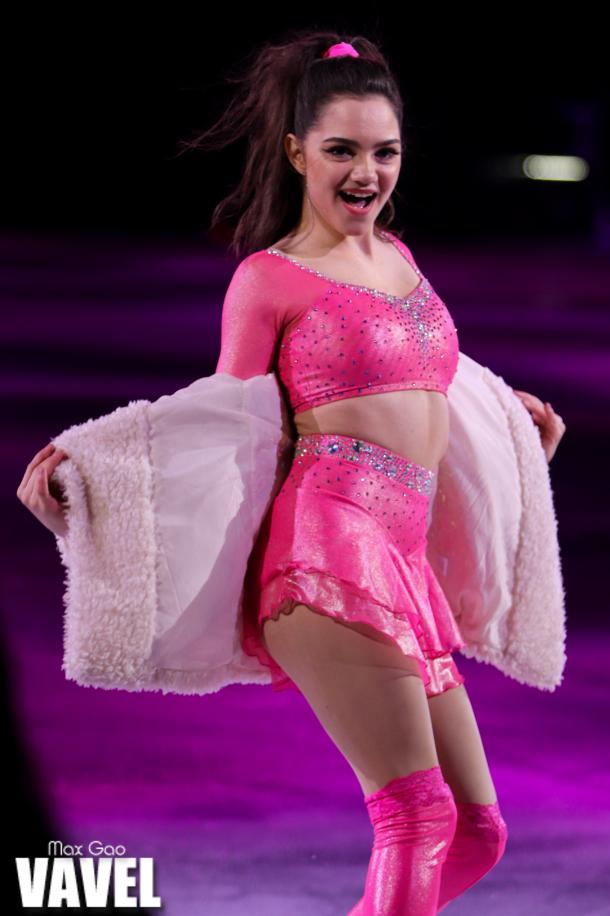 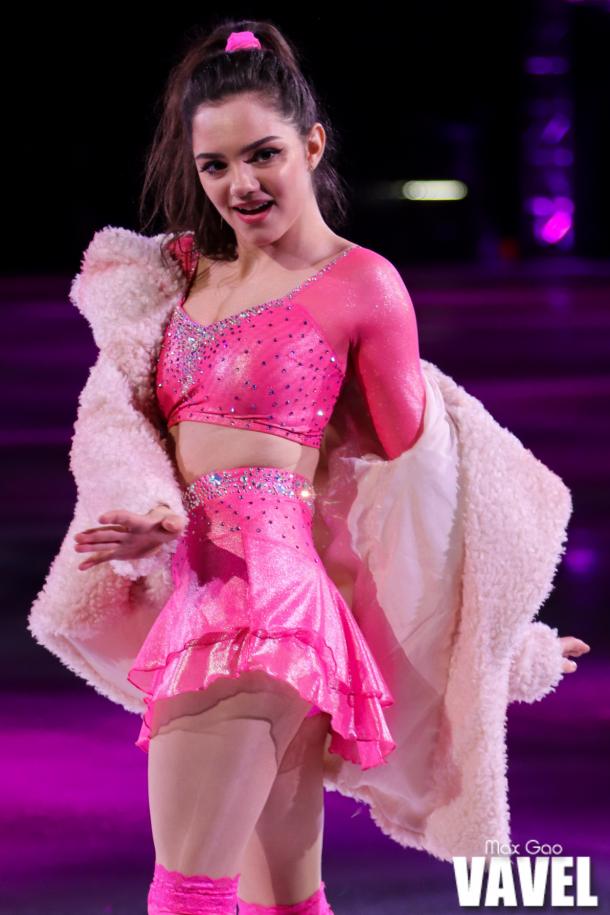 As anyone in figure skating will tell you, a lot can change in a few years. After winning back-to-back World titles in 2016 and 2017, Medvedeva was easily considered the most dominant force in ladies’ figure skating and seemed primed for Olympic glory. However, the unpredictability of injuries and the unexpected emergence of a compatriot three years her junior (Alina Zagitova) quickly saw that title slip from her grasp.

Determined to prolong her competitive career for as long as she could, Medvedeva made the decision to switch to Orser a couple of months after the Olympics, and she struggled in large part to recapture the same magic of her first two senior seasons. Through all her struggles, the 19-year-old admits that she was able to discover a lot of things about herself, thanks in part to her strong support system.

“I can say that I’m a really, really strong person,” she said with a big smile. “Last season, last year, I’ve just been through a lot of things — not always good things — through some bad things, but yeah… Now I’m here and things are going as it’s going and everything is fine.”

For a period of time, that did not seem to always be the case in a roller-coaster first season with Orser and Wilson. After winning a silver medal at the Autumn Classic International, the Russian managed to produce an incredible free skate to recover from a disastrous short program to place third at her first Grand Prix event, the Skate Canada International. With a shot at qualifying for the Grand Prix Final at her next event in Grenoble, France, Medvedeva barely missed the podium and, with it, her chance to qualify for the prestigious six-skater event.

A month later, Medvedeva returned to Russia to skate in her first competition on home ice since switching training bases at the incredibly competitive Russian Figure Skating Championships. With Orser by her side, the Russian didn’t know what to expect. When she made the unexpected switch last spring, she had inadvertently ended an unspoken trend that had become second nature for most of her compatriots: successful Russian skaters always stay in Russia. By becoming the sport’s first prominent Russian to leave the country to train with a non-Russian coach, Medvedeva did not know what sort of reception would await her in her unofficial homecoming. The result was better than anything she (or Orser) could have ever imagined.

Despite another disappointing short program that saw her sitting in 14th place going into the free skate, Medvedeva still received a hero’s welcome after both programs, which helped to finally put her at ease over a decision that she had mulled over for more than six months. With a 7th-place finish at this year’s Nationals, the 19-year-old left her homeland with a greater sense of purpose.

“That was really unexpected for me and so unexpected for all our team, ’cause Brian was, like, shocked a little bit and he would say that he never saw something like this in his life — that support, that energy that the crowd gave us at Nationals,” she said, beaming. “It’s really amazing and [at] Nationals, I started to feel confident in myself and started to understand that the real crowd really loves me.”

Due to her placement at Nationals, Medvedeva was not immediately selected by the Russian Figure Skating Federation to compete in the World Championships, but after winning the Cup of Russia, she became one of the three Russian women sent to compete this past March in Saitama, Japan. Despite sustaining an injury to her thigh, the two-time former champion managed to win the bronze, earning new personal bests in both the short and free programs in the process.

A couple of months later, Medvedeva says she feels much better now and just needs some time and practice to recover all of her triple jumps. While she struggled to find the words to describe the kind of technical strides that she has been making in the last 12 months with Orser and Wilson, the former World champion admits that she does feel like a completely different skater now than when she dominated the sport. “My body’s changed and the whole feeling of figure skating has changed for me in a good side,” she remarked.

“And I continue to improve my feeling of competitions ’cause the old ways that I went to competitions before, it doesn’t work at all anymore, so I have to find new ways to prepare myself mentally and physically ’cause I’ve got a totally different body, a different mind and sometimes I’m trying to go back to my old ways but it doesn’t work!” she said, laughing.

“So, yeah, I will continue to find it and I know Brian and Tracy will work [with] me and help me with it.”

For someone who has already tasted success at such an early age, it goes without saying that this was the most difficult season of Medvedeva’s career. Once considered the heavy favourite at every event that she entered, the Russian now finds herself returning to the same competitions as a sort of dark horse, which she says is something that she is slowly learning to take in stride, along with the little things that she continues to learn about herself every day.

“I’m proud of that I’m not gave up and I’ve been in situations where I’ve really thought to give up, but I’m lucky that now I’ve got a lot of people around of me who always support me and will support me in all decisions that I will do,” she said, when asked about what she is most proud of looking back on her difficult season. “There’s all my friends, all my coaches — Brian, Tracy especially — [and] my mom, who is living with me here and put everything into my figure skating. That’s amazing to have a lot of many people like this because not everyone has that person [or support system].”

With the help of this crucial support system, as well as an incredibly diverse group of training mates at the Toronto Cricket and Skating Club, Medvedeva admits that she has gradually become more comfortable with the idea of living in Canada. As an avid coffee drinker, she raved about the simplicity of Tim Hortons. While travelling from Ottawa to Laval for this year’s tour, she even ate her first Beavertail, a classic Canadian fried dough pastry that is shaped like a beaver’s tail. (“[The] guys just bought a box of Beavertails and they said, ’Ah, she’s Russian! She never tried it!’”)

While she has learned to appreciate some aspects of the Western world, Medvedeva has stated repeatedly in past interviews that she has no intention of representing any country other than her motherland and in many ways, she still considers herself to be completely Russian.

In a year of firsts for the 19-year-old, Medvedeva’s competitive career is not the only thing that has seen a refreshing change of pace. For the first time in between seasons, the Russian has decided to join the famous Stars on Ice tour in Canada, a 12-city tour that will finish in Vancouver on May 16. Asked about what the experience has been like before her fourth show in Toronto, a very exuberant Medvedeva exclaimed, “This is a lot of fun!”

“I was a little bit worried in the first few days ’cause I had to learn a lot — a lot of steps, a lot of material — and I just can’t see how [other] guys are learning so fast. I was really worried ’cause I’ve always been so slow in remembering something, but in the last day, everything’s fine and I just relaxed a little bit. We’re just having fun, especially the 90s number — that’s so much fun and we can feel like the crowd loves it.”

While skating show programs has been a nice change of pace for the two-time World champion, one would be remiss to think that she has not been conscientiously using the extra ice time between shows to perfect her jumps, particularly her triple salchow, which appears multiple times throughout the show.

Going forward, as someone who has become more known for her world-class artistry, Medvedeva is well aware of the current state of figure skating across all four disciplines, whose new scoring system has been designed to benefit those who attempt more difficult elements. It is a system that the Russian unfortunately knows all too well — after all, she was only 1.31 points away from capturing the gold last year in PyeongChang.

With her sights already set on going one better at the next Olympics in Beijing, Medvedeva has set a very ambitious goal for herself — one that she knows could take years to properly develop, let alone put to use in competition. “Quad salchow is my main goal for me for the coming season and I would like to land it clean — maybe step-out, maybe three turns, but somehow land it with no under-rotations,” she revealed.

“I’m ready to improve myself and I’m ready [and know] that learning quads can take a few years — same as triples. I didn’t learn all the triples or even one triple, like a triple flip, in one year — I didn’t. It was three years.”

As she attempts to develop one of the most difficult jumps in all of ladies’ figure skating, Medvedeva will also be looking to add new combinations to her repertoire next season, explaining that the process actually fascinates her and continuously pushes her creatively as a skater. “I can do a few combinations with the loop too, like not only salchow loop, but it’s much harder for me so I have to work on it to make it easy,” she said, referring to the new 3S-3Lo combination that she added midway through this season.

With the most difficult part of her transition now behind her, the 19-year-old has already announced on Instagram that she will skate her new short program to Matt Bellamy’s “Exogenesis: Symphony, Part 3” and her free program to music from Memoirs of a Geisha, a decision that she made entirely herself long before this year’s World Championships.

In terms of goals for the upcoming season, the 19-year-old kept things short and sweet but in a way that perfectly encapsulated the maturity that she has shown in the last 12 months: “I just want to find the way how to prepare myself and to learn as much as I can.”

With a strong support system in tow and the lessons of a roller-coaster transition season now under her belt, Medvedeva will be in for a real battle next season with the emergence of a very talented group of young skaters, but like a phoenix rising from her own ashes, there is now no question that she will emerge stronger than ever, poised to reclaim her throne atop the world of ladies’ figure skating.

2021 PGA Championship: Mickelson leads by one, on the cusp of golf history 21 days ago

2021 PGA Championship: Mickelson, Oosthuizen tied for lead after second round 21 days ago

The Masters: Justin Rose talks about opening 65 2 months ago
//