The Detroit Pistons will return home for game three of their first round playoff series against the Cleveland Cavaliers, who currently hold a two game to zero advantage over the Pistons after having won both games in Cleveland. The Pistons hope to bounce back against the one seeded Cavaliers, after giving Cleveland a fight in game one but losing their footing in game two.

After losing three of their four regular season matchups against the Pistons, the Cavaliers have taken advantage of their home court early in the series. The Cavaliers have won 10 straight playoff games against the Pistons, including their four game bounce back win in their 2007 run to the Finals and the 2009 sweep against Detroit in the first round.  Cleveland will go to Detroit in hopes of replicating the outcome of the one-eight matchup from 2009, gaining another win to move closer to a sweep.

The Pistons put up a fight against Cleveland at home in the first game of the series, however the Cavaliers were able to pull out a 106-101 win behind the momentum of their crowd and the strong play of Kyrie Irving and Kevin Love, whose first career playoffs were both cut short last season. The Pistons started the game on fire from long distance, finishing the first half 10 of 16 from behind the 3-point arch according to NBA.com, allowing them to jump out to a 58-53 lead going into the half.

Cleveland was not phased by Detroit’s hot start, as they came out focused in the second half. Behind the strong play of Irving, who led the team with 31, and Love, who had 28 points and 13 rebounds, the Cavaliers were able to bounce back late in the third and into the fourth quarter. Additional strong play late from LeBron James, who notched 22 points and 11 assists, allowed the Cavaliers to push forth to a game one win, 106-101. The Pistons were led by Kentavious Caldwell-Pope, who had 21 points.

This young Pistons team does not lack confidence, as they came out laser focused to start the second game of the series.  Detroit jumped out to an early lead, ending the first quarter with a 28-23 advantage. The Cavaliers, however, were unwilling to give up their home court advantage and won the final three quarters and ultimately the game, 107-90. Cleveland was led to the dominant win by James, who led the team with 27 points on 12 for 18 shooting.

Irving added 22 points and J.R. Smith scored 21 points. Smith, who led the team with seven 3-pointers, was a major factor in the Cavaliers tying the NBA playoff record for most 3-pointers made by a team with 20 makes from behind the arch. Although Detroit started the game hot, they were unable to gain further traction against the East’s leading team. Andre Drummond led the team with 20 points in the loss. 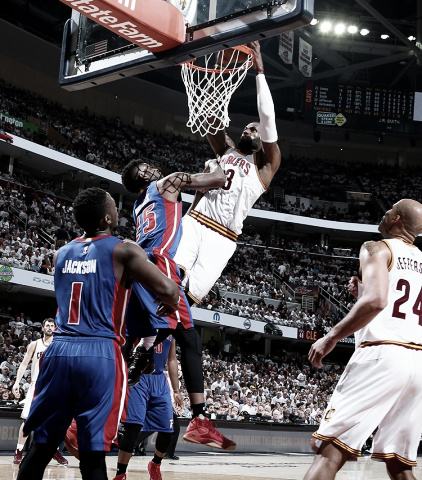 Things to look out for

The play of Irving and Love continues to be a major factor in the Cavaliers’ success. Irving has come out strong to start the series, and must continue his consistent shooting. Love had a strong showing in game one but struggled to find his flow in the second game of the series.  Although the Cavaliers notched a strong while Love struggled, he must ensure that he contributes to the scoring for Cleveland to win on the road against this feisty Detroit team.

Detroit guard Reggie Jackson will look to step up his play and must become a leader for this Pistons team, who rely on his scoring abilities greatly. Jackson had 17 points in game one and 14 in game two, but must aim to push his scoring into the 20’s to further Detroit’s chances of stealing games from Cleveland.

Following game two, the series seems to have ramped up its intensity. James took some hits from multiple Detroit players in the second half of the game and was clearly frustrated by the officiating. Detroit players seem to be frustrated with James as well. In his post game comments, rookie Stanley Johnson stated that James and the rest of the Cavaliers “talk a lot.” Johnson also noted that he believes he is in James’s head with his aggressive defensive play. It will be interesting to see whether these comments make for controversy in an already exciting series.

Game three will be played at The Palace of Auburn Hills in Detroit on Friday evening. The game will air at 7 p.m. on ESPN.