The US Women’s National Team defeated the German side 1-0 in a match that was eerily similar to the one in last years’ SheBelieves Cup opener for both sides. This is the third straight year that the US has beaten the Germans. The United States won in 2016 2-1 and won last year 1-0.

The only goal in this match came in the 17th minute courtesy of Megan Rapinoe off an assist from Alex Morgan. The US had their fair share of chances throughout the rest of the match, but the subpar conditions made it difficult for either side to make a statement.

Rapinoe opened up scoring in the 17th minute. Goalkeeper Alyssa Naeher, who earned her 25th cap, sent her long service to Morgan who flicked in in front of Rapinoe on the run. The midfielder outran her defender and sent the ball through goalkeeper Almuth Schult’s legs and into the back of the net for her first goal of the year and her 35th overall.

Even with the 1-0 lead, the US had 46% of the possession in the first half compared to Germany’s 54%. The United States women outshot the Germans 5-4 and had two shots on goal while the other side had just one. 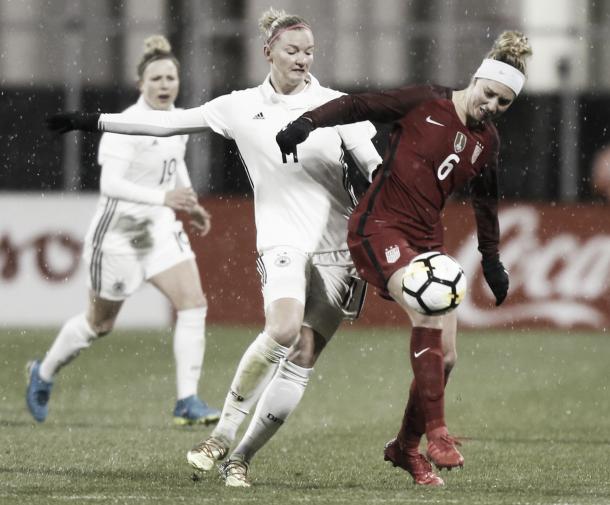 The second half proved to be much of the same. The weather continued to worsen as the temperature dropped, the wind picked up and the snow started to fall, making it nearly impossible for either side to make an impact.

A promising sight was the return of midfielder Morgan Brian. After missing most of 2017 with a hamstring injury, the 25-year-old made a triumphant return to midfield after subbing in for Carli Lloyd in the 65th minute. This was the first action she saw since the match against New Zealand in September.

The match came to an end after what ended up being six minutes of stoppage time. The US dominated the Germans in every category, accumulating 14 shots to seven and four shots on goal to two. Germany committed more fouls than the US- 13 fouls as compared to six including two yellow cards in the second half on Alexandra Popp and Tabea Kemme in the 75th and 83rd minutes, respectively.

The US will look for two more rematches with France and England, the two teams they lost to last year. The Germany will take on England next and then France. The US lost to France in the SheBelieves Cup finale by a score of 3-0 and before that lost to England 1-0 after an 89th minute goal.

The USAvFRA match will be 12 p.m. ET Sunday March 4 on ESPN2 with the GERvENG match following after, streamed on ESPN3. The final day will be Wednesday March 7. Germany will take on France at 4 p.m. ET on ESPN3 with the USAvENG match closing out the tournament at 7 p.m. ET on ESPNews.