Denmark can't get a shot on goal, no matter how hard they try to generate danger, the English are well stopped.
5:29 PMa year ago

Paulsen's shot ends up being blocked by Pickford's hand to prevent the equalizer.
5:28 PMa year ago

Sterling and Kane team up, but the Danish defense is well positioned at the back and it's difficult for the English.
5:24 PMa year ago

Denmark tries to break through England's defense, but England is well stopped at the back.
5:20 PMa year ago

The second half begins in London.
5:17 PMa year ago

England goal! Harry Kane shoots from the penalty spot, Schmeichel saves, but on the rebound Kane sends the ball into the net.
5:11 PMa year ago

Penalty! Sterling was fouled inside the area by Jensen and does not hesitate to award the penalty.
5:09 PMa year ago

England is looking to take the lead. The English keep reaching Kasper's goal with a lot of danger.
5:06 PMa year ago

Maguire's shot was blocked by the defense to prevent the English from taking the lead.
5:04 PMa year ago

Double change for England. Foden and Hendersen take the places of Mount and Rice.
5:02 PMa year ago

Schmeichel's spectacular Schmeichel prevents Kane from piercing his goal with a flash.
5:00 PMa year ago

Denmark defends with all its might, looking to extend the match.
4:45 PMa year ago

Danish service that Stones ends up taking out of Pickford's area.
4:39 PMa year ago

Stones' header, but the goal does not open for the English.
4:36 PMa year ago

Goalkeeper! The Danish goalkeeper appears to clear a dangerous ball from Mount's cross.
4:25 PMa year ago

Change of England. Grealish is replaced by Buyako Saka.
4:25 PMa year ago

Tiple change for Denmark. Stryger, Dolberg and Damsgaard come off, while Wass, Norgard and Paulsen take their places.
4:20 PMa year ago

Mount's shot ends up in the hands of the Danish goalkeeper.
4:15 PMa year ago

Dolberg's half-turn and ends up sending a shot at Pickford's goal, but it doesn't generate much danger and the goalkeeper keeps the ball.
4:12 PMa year ago

Schmeichel's block! After Maguire's header, the Danish goalkeeper prevents them from scoring the second.
4:10 PMa year ago

Pickford makes an excellent save after Braithwaite's flick.
4:02 PMa year ago

Both teams are looking to take the lead in the second half.
3:46 PMa year ago

At the end of the first half, the match was quite intense and the score was tied.
3:40 PMa year ago

Goal, goal, goal for England! Saka's cross, which Kjaer tries to clear, but ends up putting the ball into his own net.
3:39 PMa year ago

Goalkeeper! Sterling's shot, but Schmeichel ends up diving to keep his goal from falling.
3:31 PMa year ago

Goal, goal from Denmark! Great free kick shot by Damsgaard that ends up in the back of the goal taken care of by Pickford.
3:27 PMa year ago

Close! Damsgaard was encouraged to shoot at Pickford's goal, but the ball goes slightly wide.
3:25 PMa year ago

A very lively game in the midfield, both teams are looking for a goal
3:17 PMa year ago

Uff! Braithwaite and Hojbjerg shoot at Pickford's goal, but the former does not do any damage and the latter goes wide of the goal.
3:15 PMa year ago

What a move! Great one-on-one from Sterling who ends up cutting back, passes and shoots between Kjaer and Chritensen, but Schmeichel ends up keeping the ball.
3:10 PMa year ago

Good rebound by Vestergaard, England are on top of Kasper's goal.
3:05 PMa year ago

Excellent service from Kane, but Sterling, more than makes the effort, fails to get to impact that ball.
3:00 PMa year ago

The meeting starts. Wembley shakes as the whistle blows to signal the start of the semi-final between England and Denmark.
2:50 PMa year ago
2:45 PMa year ago

The teams are already on the field, singing the anthems of each nation. The adrenaline is pumping in search of the second finalist of this edition.
2:40 PMa year ago

Both teams have already arrived at the mythical Wembley Stadium, where the last finalist of Euro 2020 will be decided. Both teams are already warming up before the start of the match.
2:35 PMa year ago 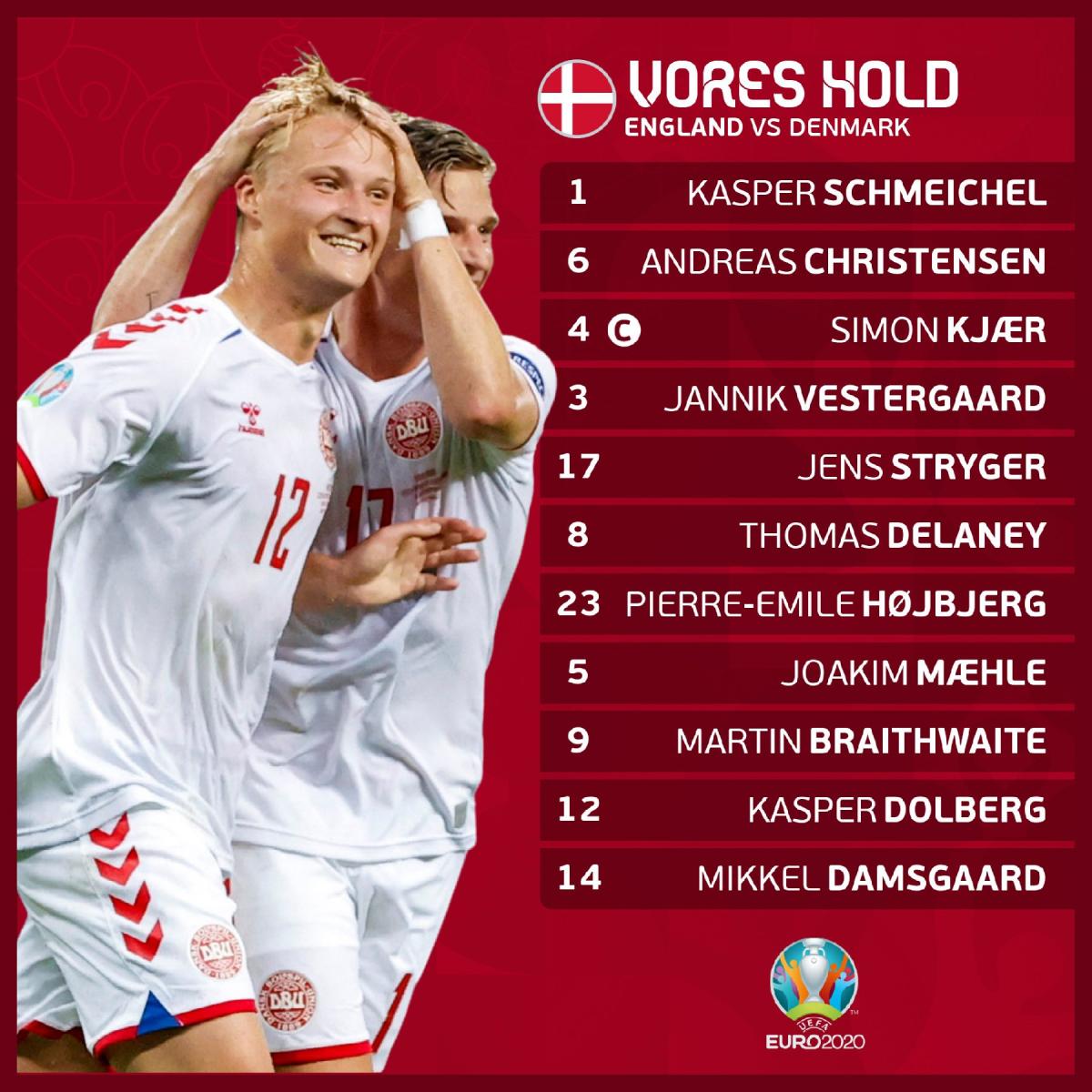 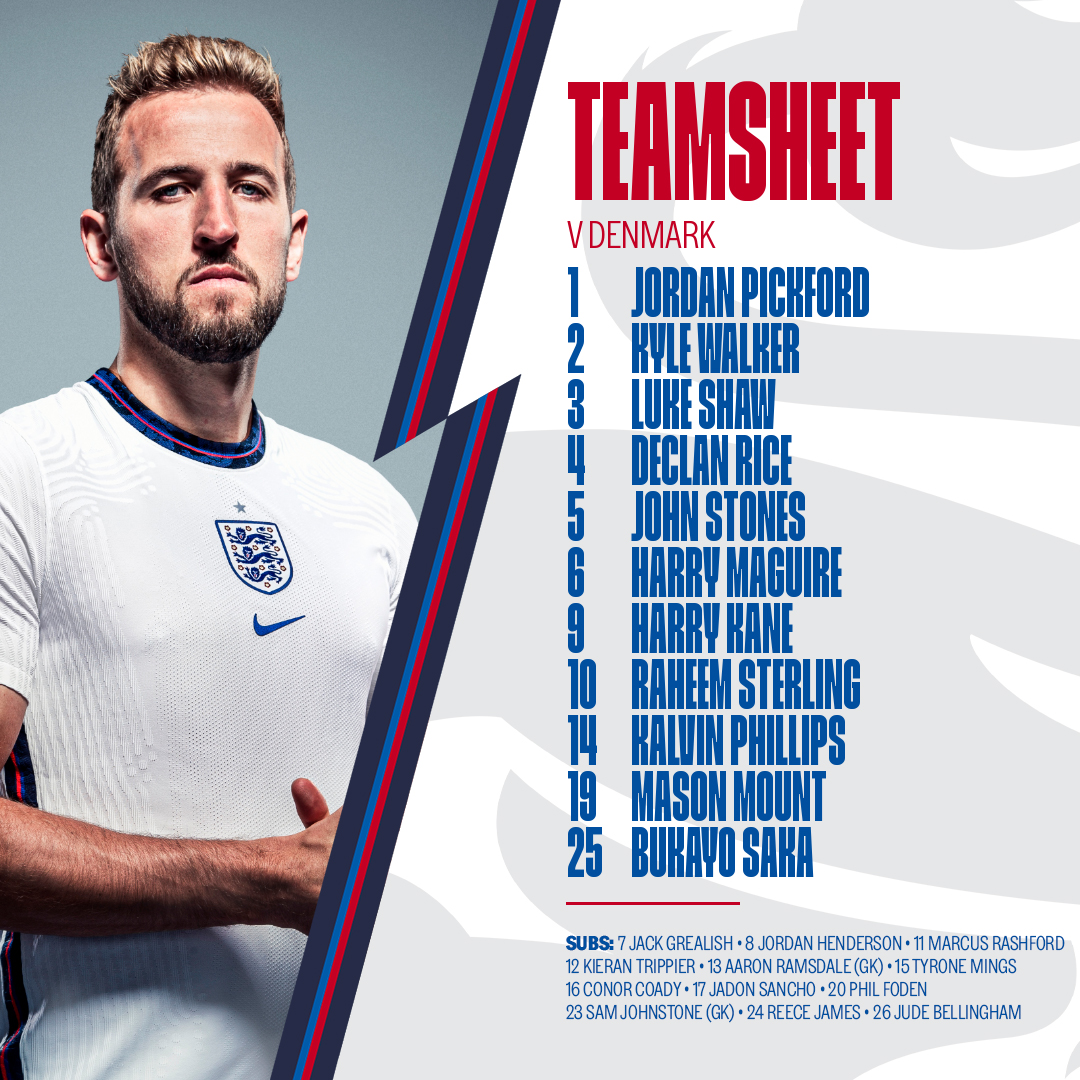 In total there have been 23 occasions in which Denmark and England have faced each other, between official and friendly matches; 23 of these matches have been won by England, winning the series, 5 draws and only 4 wins for Denmark. Denmark's last victory was by the minimum and occurred in this building.
2:15 PMa year ago

The English fans are already at the stadium, looking for their team to break the bad streak that has reigned in the Three Lions' team. They will make their team feel at home, looking to stay in the Euro.
2:10 PMa year ago

Seeking to stay in the tournament

Denmark comes to these instances looking to continue their participation, where they will go all out for the final, it is important to highlight; the Danes want to dedicate a new victory to Eriksen.
2:05 PMa year ago

They want to make history!

The English are already in London, where they will seek to enter the final of the Euro for the first time. They have never reached the final of this tournament.
2:00 PMa year ago

Denmark's dressing room is ready to receive the selected players, with all the clothes ready. 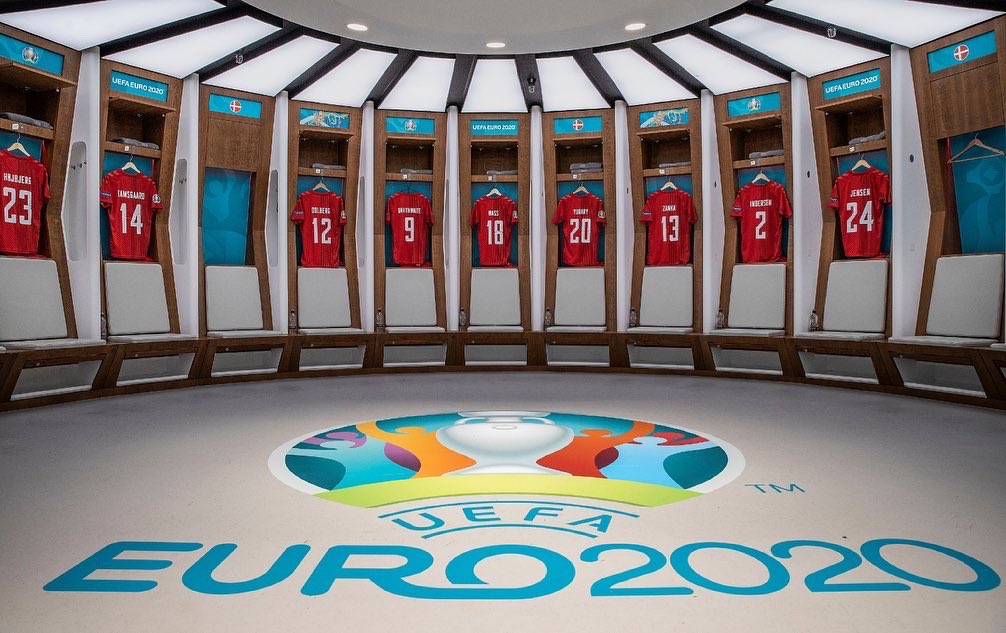 Wembley, located in London, is now ready to host the semifinal that defines the second opponent for the Euro 2020 Grand Final. 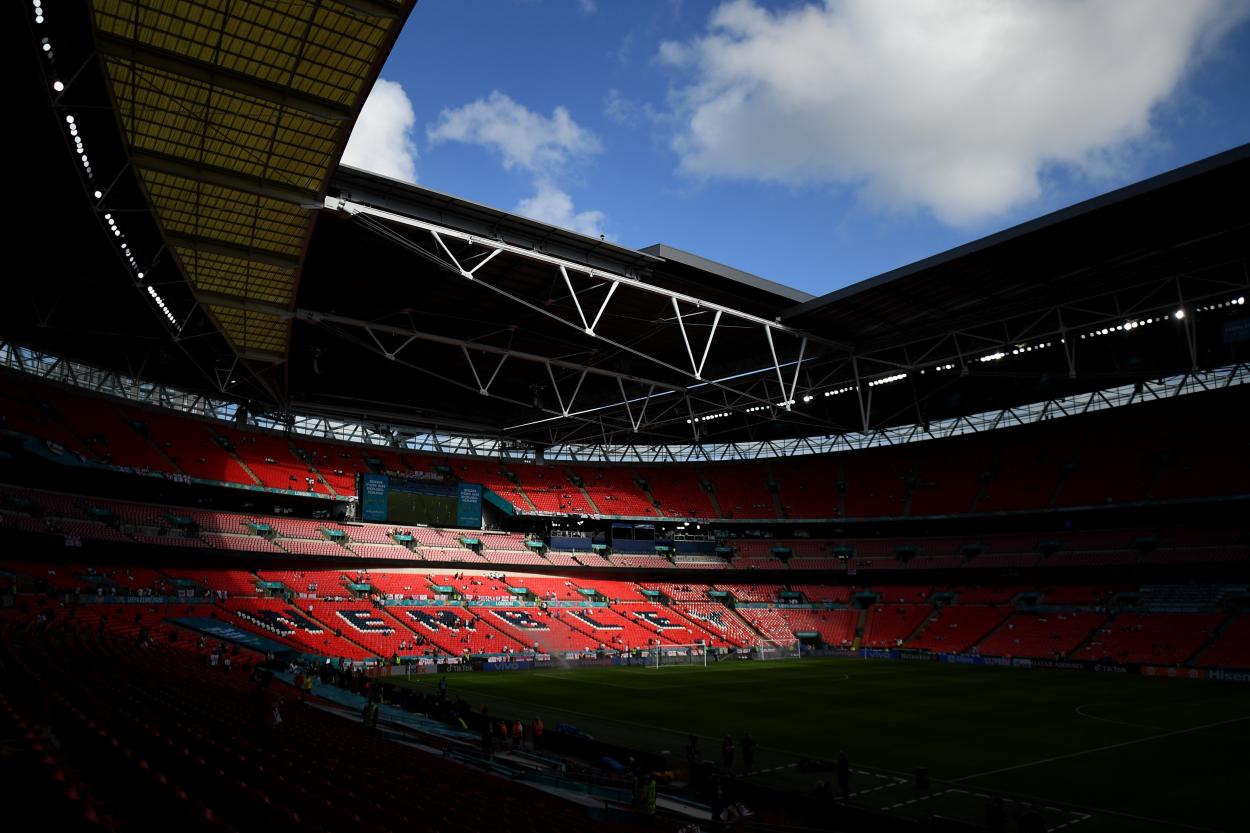 Don´t leave here, in a few moments we will provide you the lineups and all the relevant information that happen on Wembley's stadium. Do not miss a detail of the match England vs Denmark live updates and commentaries of VAVEL.
1:45 PMa year ago

How to watch England v Denmark Live Stream on TV and Online?

If you want to watch the game England vs. Denmark live on TV, your options is: TUDN.

It should be remembered that in Denmark's first match of this edition, Christian Eriksen fainted on the field and was lost for a few minutes, a situation that left the entire soccer community in shock.
1:35 PMa year ago

Kasper Hjulmand spoke after the victory over the Czech Republic, where he touched on the subject of Christian Eriksen: "We are in constant communication. I talk to him. I think about him all the time and I also did when we entered the facilities here in London. We feel he is here with us. We play for him and with him. There is no doubt about that. That's what I can say about Christian. I hope that, if we get to the Final, we'll be together."

"I'm excited, like a kid at Christmas. I'm very proud of my effort, but also of the whole team, it wasn't a one-man job."

After qualifying for the semi-final, Southgate told a conference: "All my players did very well, we managed to rest some players who were injured. But I also think about the players who didn't get the chance to play tonight. My players are fantastic, they understand the importance of the group and thanks to this attitude we are in the semifinals," he said.

"I saw many teams eliminated because they don't have such a united group, it's something important. "The challenge is to win the tournament. We already played Denmark twice last fall and it was tough. They are very motivated, it will be a great game. We have more experience in this kind of matches. This is something important, but we have to come well prepared."

This is the fourth time that Denmark has reached a semi-final at the European Championship; they reached the final in 1964, 1984 and 1992; in the latter, the Danes were crowned champions.
1:10 PMa year ago

England is the team with the most games played in the history of the European Championship that has failed to reach a final.
1:05 PMa year ago

They don't make it through!

With this match, England has now reached three Euro semi-finals. The first time they lost to Yugoslavia in 1968, the second time they were eliminated from the penalty spot in '96 at the hands of Italy.
1:00 PMa year ago

Denmark and England have met seven times at the Wimbley Stadium. In all matches, the score has ended 1-0; accumulating 5 victories for England and two for Denmark. It is important to highlight that Denmark has won the last two matches in this stadium, although no team has beaten the English on three consecutive occasions.
12:55 PMa year ago

Head to head England vs Denmark

This is the third time these two teams have met in major tournaments. In the 2002 World Cup, England came out on top. In Euro 1992, the match ended in a goalless draw in the group stage, a tournament where the Danes emerged triumphant.
12:50 PMa year ago

Denmark has won only one of its last six matches against England. Of those matches, there have been three draws and two defeats. The match England won was in the 2002 World Cup by three goals to nil.
12:45 PMa year ago

They had a tough time 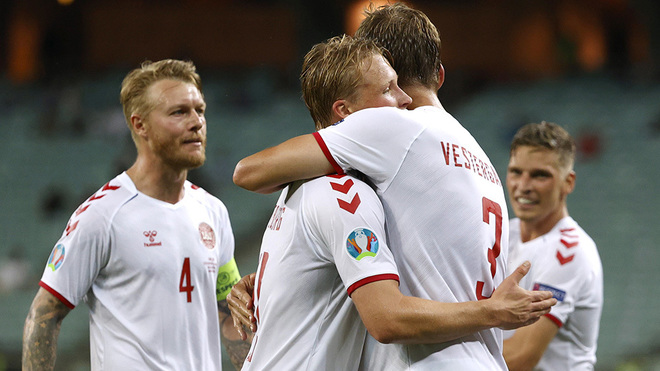 They arrived on foot!

England reached this stage after defeating Ukraine, a team that was no match for the English, who, with a brace from Kane and goals from Maguire and Henderson, qualified for the semifinals, a stage they had not reached since 1996. 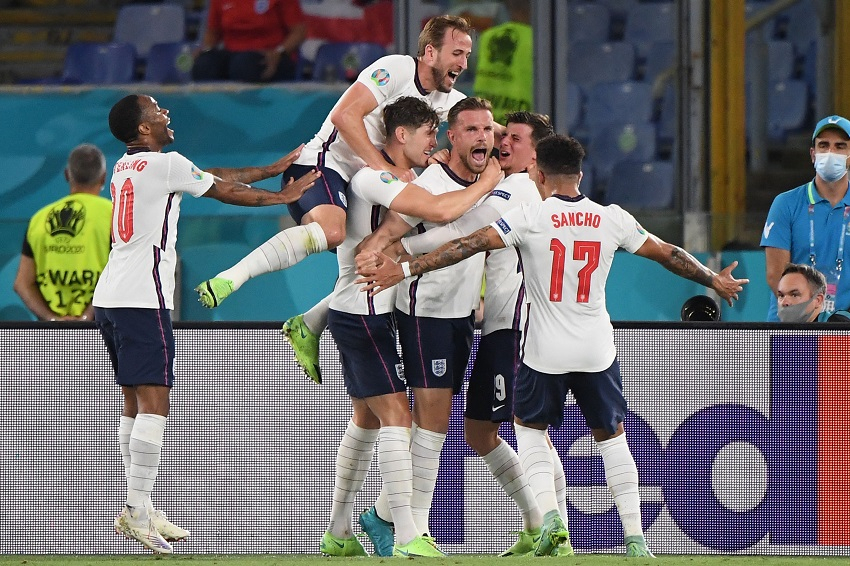 This afternoon, Wembley will dress up to receive the match that will define the second finalist of Euro 2020. A match that generates great expectations due to the great things that both teams have shown. The stadium has a capacity of 90,000 spectators. 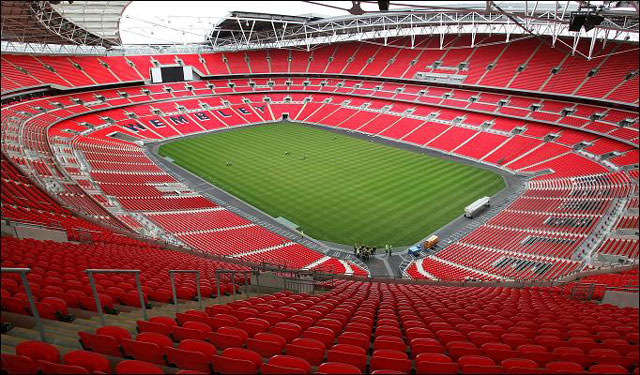 Welcome to VAVEL.com’s coverage of the 2020 Euro match: England vs Denmark Live Updates!

My name is Loire Solórzano and I’ll be your host for this game England vs Denmark live. We will provide you with pre-game analysis, score updates, and news as it happens live here on VAVEL.