It was an impressive day for Angelique Kerber who had to take on Caroline Wozniacki in the second semifinal of the day. In the first semifinal, Karolina Pliskova pulled an upset on Serena Williams. Because of that loss, Kerber became the new world number one and that seemed to give her enough confidence in her semifinal match where she dominated Wozniacki the whole time to win 6-4, 6-3 in 86 minutes. This is the first time, Kerber reaches the final of the US Open and it will be her third Grand Slam final in what has been an amazing year for the German.

At 28 years, 238 days old, Kerber is the oldest player to make her debut as a number one. She also becomes the second German to reach the top spot since Steffi Graf.

Weak start from Wozniacki, Kerber stops the Dane attempt to come back into the set

Wozniacki started the match in the worst way possible as she did three unforced errors to face three break points. A long backhand gave the break and the early lead to Kerber. The Dane was able to stay in the long rallies, but at the end was the most erratic and helped the German to consolidate the break and be up 2-0. The former world number one struggled to keep her serve, she saved two break points but couldn’t save a new opportunity that Kerber created to confirm the double break and be up 3-0. The Dane was too erratic as she could barely win a point and with that, the lead of the German expanded to 4-0. 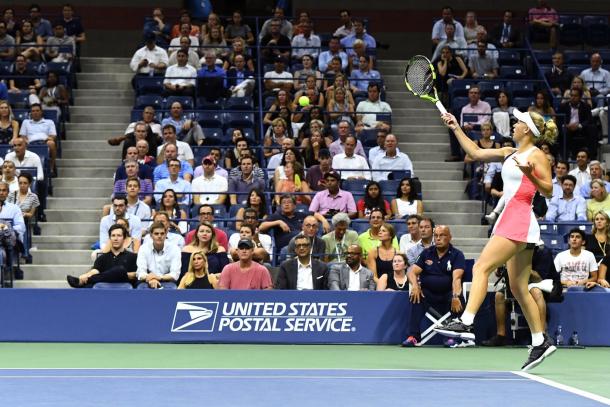 Again Wozniacki saw herself in an uncomfortable as she was forced to save two break points to finally win her first game of serve and get on the scoreboard. For the first time in the match, the Dane had break points as she took advantage of the mistakes from Kerber, the German saved one but then double-faulted on break point. That hold gave a spark of confidence to Wozniacki who again held her serve without facing problems to now just be a break down, 3-4. Despite the recent improvement of her opponent, Kerber still held to be up 5-3.

On her serve, Wozniacki saved on set point, but it didn’t take long for the German to get a new chance to take the set. The Dane again saved it and eventually held to be 4-5. Kerber didn’t face any problems as she served for the set, quickly getting two set points and winning after a wide backhand from the Dane to take the opening, 6-4. 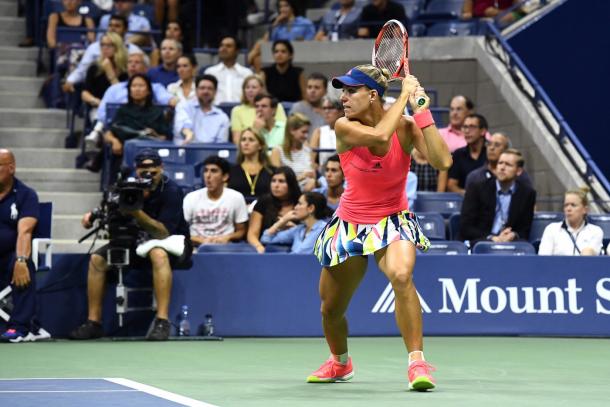 In the first game of the second set, Wozniacki had problems with her tossing which brought her two break points that she conceded after a forehand into the net. The German was quick to consolidate the break and lead 2-0. This time, the Dane didn’t want a replay from the first set and held her serve to get on the scoreboard and just one break down. The German was down on her game of serve but she managed to come back and win the game to keep the lead and be up 3-1.

A very erratic game from Wozniacki put her in the same position as in the first set when she couldn’t hold her serve and handed a second break to the German who now was in full control leading 4-1. Kerber was unstoppable playing impossible shots that not even the great defensive skills of Wozniacki could stop as she ran away with the set and the match 5-1. Despite being two breaks down, Wozniacki managed to hold her serve to love but now the pressure would be on the recently-crowned world number one to serve out the match and book her spot in the final.

While serving for the match, Kerber did a double fault that gave Wozniacki three break points which Kerber conceded after a forehand into the net to give one of the breaks away. The Dane needed to hold to stay in the match but after some mistakes, she helped Kerber to get her first match point. After an intense rally, Wozniacki hit a long backhand to give Angelique Kerber the victory and her pass to her third Grand Slam final in the year. 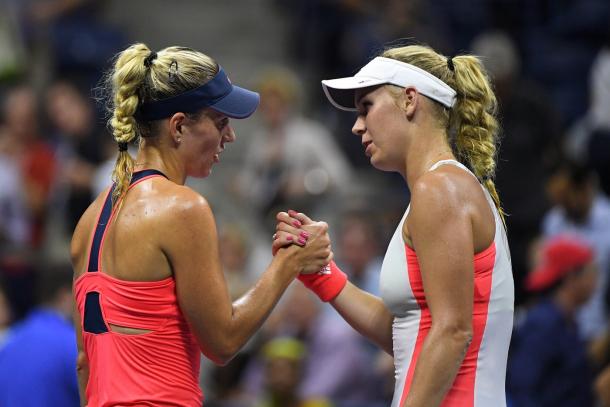 In the grand final, Angelique Kerber will face Karolina Pliskova who pulled a shocking upset on the now former world number one, Serena Williams in straight sets. This will be the seventh meeting between the Czech and the German. The last one happened only a couple weeks ago at the final of the Western & Southern Open in Cincinnati where Pliskova took the title after a straight sets win over Kerber. This will be the third encounter in a final for them, two on hard courts and one in grass, Kerber leads 2-1 in finals. 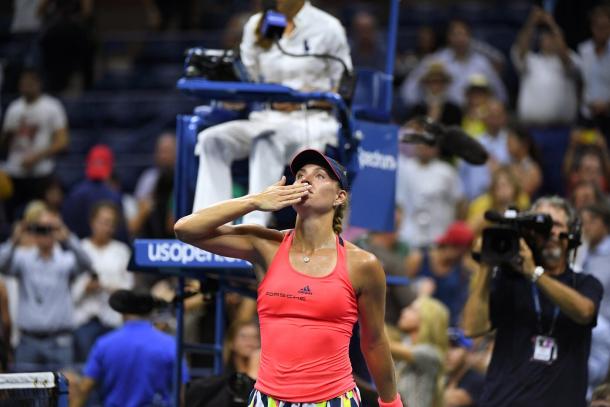