Traditional powerhouses Russia managed to defeat Chinese Taipei by a 4-1 scoreline in the World Group II of the Fed Cup competition despite suffering a slight scare after the conclusion of the first day. Ekaterina Makarova was the hero of the weekend as she claimed two crucial victories as the top-ranked player in the tie, with Natalia Vikhlyantseva sealing the win for Russia.

Makarova gets Russia off to perfect start

The top-ranked player in this tie Ekaterina Makarova is the only veteran in the Russian team as captain Anastasia Myskina opted for a young team to allow the up and coming Russian youngsters to get some experience on the big stage. Growing up playing in this area, a win for Makarova against the underdog Lee Ya-hsuan would definitely prove very meaningful.

The former top 10 player seemed to have the best start possible to the match as she strolled to a 3-0 lead in the early stages of the match, looking to finish the match as soon as possible. Having a chance to earn a double break lead, Makarova looked nervous on break points as she wasted a total of two of them to allow Lee to get on the scoreboard by holding her service game. The service hold proved to be very encouraging as that gave Lee the momentum and confidence to break straight back in the next game, returning on serve at 2-3 despite being a point away from trailing 0-4.

An exchange of service holds to love followed as both players became more solid on their serves as the match progressed. Despite throwing away the big lead just now, Makarova did not seem to let that affect her as she broke serve once more at 4-3 to regain the lead and have the chance to serve out the first set. The Russian veteran did just so, serving out the first set comfortably and be a set away from giving Russia a perfect start.

With the momentum with her from the first set victory, Makarova made the best possible start to the second set as she broke serve immediately to get the early advantage, looking to close out the match in straight sets. Keeping the lead was not easy, though, as Lee broke back straight in the following game, returning level on serve and preventing Makarova from running away with the match in her hands. Lee took the lead in the match for the first time as she was the one who made the next breakthrough, breaking the vulnerable Makarova service game to open up a 3-1 lead after a sudden momentum change.

The top-ranked Russian player in the tie then made an immediate reply, breaking straight back to return on serve. With the second set becoming more unpredictable now with Makarova being very inconsistent, Lee was the one who had the chance to level the match as she earned a break point opportunity in 4-3, but was unable to convert it. Showing nerves of steel with the supportive home crowd, Makarova saved two consecutive set points with some strong serves to keep herself in the set with the hopes of a straight sets victory still alive. Wasted chances cost Makarova greatly again as she missed a break point at 5-5 and eventually saw her serve being broken in the next game to gift the set to Lee 7-5 and level the match.

The final set looked to be tight as an exchange of service holds started the set, with Lee playing her best tennis. We did not have to wait for the first service break in the final set as Makarova stepped up her game to break serve at 1-1 after saving a game point to take the lead. The Russian affirmed her lead in the scoreboard as she consolidated the service break to extend her lead to two games.

Makarova’s excellent run continued as she broke serve once again to have a double break lead and looked on course for the victory as she earned a 5-1 lead eventually. The former Australian Open and US Open semifinalist finally clinched the win in 2 hours and 21 minutes as she prevailed in a marathon 17-point game which went into Russia’s favour to give them an overall 1-0 lead.

With Chinese Taipei’s hopes all relying on Chang Kai-chen now, she had a tremendous amount of pressure on her as she had to win her rubber against Anna Blinkova for her country to level the match and enter the second day with a respectable amount of chance to create a huge upset.

Blinkova looked on course to extend Russia’s lead as she had a fast start to the match, breaking serve in just the first game of the match to take the early advantage. Looking very vulnerable on her serve, the youngster failed to consolidate the service break as Chang broke back immediately to return on serve. Nevertheless, Blinkova showed her potential as she earned yet another service break to regain the lead and take the advantage once again.

For the first time in the match, the Russian youngster finally held her serve to be the first to get on the scoreboard in the second set despite having to save a total of four break points in a nervy game to get the second set started. Blinkova then let her nerves get the better of her as her lack of experience cost her another service break, falling behind by a set and a break. Chang lost that advantage soon after when the score was 3-2, losing her service game and allowing Blinkova to return level on serve.

Similar to the first set, there was an abundance of service breaks as there were four consecutive breaks of serve which followed as Chang earned the opportunity to serve out the match for the second time having failed to do so on her first attempt. This time, she did just so as she successfully leveled the tie for Chinese Taipei, triumphing in straight sets after just 83 minutes.

Coming into the second day of action in Moscow with the score leveled at one match apiece, the tricky job to give their nations a 2-1 lead in the tie was handed to both Ekaterina Makarova and Chang Kai-chen, the top-ranked players in their respective teams. The result was expected as it went according to the rankings, with the Russian triumphing in straight sets despite the score being very close in both sets.

Makarova made the perfect start to the match as she had the early break of serve at 1-1 to get the advantage, getting her momentum ongoing. However, keeping the advantage proved to be harder than getting the advantage itself as Chang made an immediate reply in the next game after she converted on her fourth break point in the marathon 15-point game to return on serve. Fending off a break point in the process, Chang held her nerves to hold onto her service game to lead 3-2.

Makarova’s slump continued as she was broken for the second consecutive time to gift yet another service break to Chang, falling 2-4 behind as the first set slowly gets further away in her sight. Nevertheless, Makarova stepped up her game at just the right time as she broke back unexpectedly after Chang played a sloppy service game to return on serve once more. Having the momentum running in her, Makarova’s excellent run continued as she broke serve yet again at 4-4 to regain the lead, earning the chance to serve out the set. The Russian did just so, serving out the first set comfortably much thanks to her excellent lefty service, putting herself just one set away from closing out the match.

Chang’s game seemed to crumble after the first set loss as she conceded two break point opportunities in the opening game of the second set, landing herself in a very dangerous position to fall behind by a set and a break. Nevertheless, Chang showed nerves of steel to eventually hold her serve to start the set with. This time in the second set, it was Chang who made the first breakthrough as she managed to break serve at 3-2 to open up a 4-2 lead, looking on course to force a deciding set in the match. 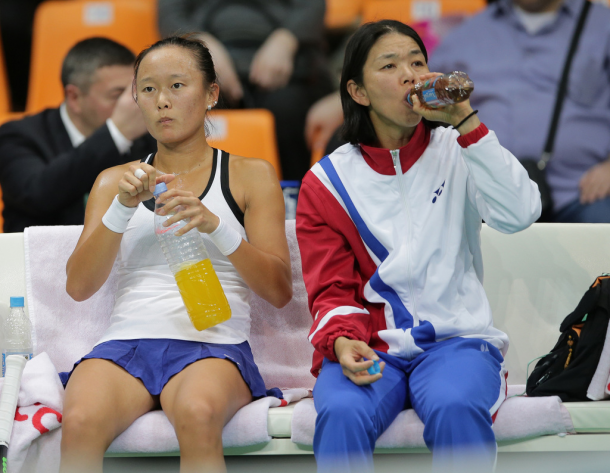 Despite Makarova threatening to make an immediate reply in the next game by earning two break points, Chang maintained her composure to carve out a tough service hold and extend her lead to 5-2, which places her in a very advantageous position to win the second set. This was when there was a large momentum shift as wise words from captain Anastasia Myskina proved to be very effective for the veteran as she rattled off three games in a row to return level all of a sudden at 5-5, keeping her hopes of closing this match out in straight sets alive. The Russian’s unbelievable run continued as she won her fifth game in a row to seal up the win after exactly 100 minutes to give Russia a 2-1 lead.

After her disappointing performance from the first day of action against Chang Kai-chen, Anna Blinkova was taken off the list for the fourth rubber as the recent St. Petersburg Ladies Trophy semifinalist Natalia Vikhlyantseva was tasked to complete the win for Russia against Lee Ya-hsuan, who did not have a bad game against Ekaterina Makarova on the first day. Vikhlyantseva, who was making her debut in Fed Cup competition, successfully completed the victory in comfortable fashion after triumphing in 59 minutes, losing only three games in the process.

Vikhlyantseva had a great start to the match as she made the first breakthrough in her opening return game, breaking serve comfortably as she took the early advantage from the start. Lee seemed to be constantly overpowered by the tall Russian as she soon fell behind 0-4 with a double break deficit, having just won one single point on the return. Fortunately, Lee relied on a sloppy service game from Vikhlyantseva at 4-0 to get one of the breaks back and lessen the deficit. There was a third straight service break as Vikhlyantseva regained her double break lead to have the chance to serve out the first set at 5-1. The Russian did just so, serving out the first set comfortably after just 23 minutes and looked on fire.

Vikhlyantseva looked poised for a comfortable victory as she broke serve in the opening game of the second set before affirming her lead with a hold of service having to come from 0-30 down to do so. With the momentum running in the Russian, one would not have thought that Lee could make a fightback as she held her service game before breaking back to return level and keep her chances in the match alive. Vikhlyantseva regained her lead as she broke serve for the fifth time to continue strolling through the match comfortably.

It became, even more, easier when it came closer to the conclusion of the match as Lee looked overwhelmed by Vikhlyantseva’s powerful shots consistently. Despite making one last push in the last game of the match which saw her earn four break points while Vikhlyantseva was serving for the match, Lee eventually fell in straight sets as Vikhlyantseva got through a nervy game to clinch the match in just under one hour.

As Russia already sealed the win, they fielded a doubles team comprising of their up and coming youngsters in Anna Blinkova and Anna Kalinskaya. They faced Chinese Taipei’s Chan Chin-wei and Hsu Ching-wen, triumphing in straight sets as they made the overall score 4-1.