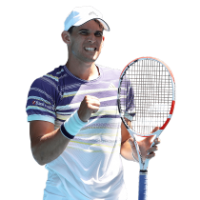 Thiem was in total control of the first set as Murray never really settled, plenty of errors from the Brit allowing his opponent to dictate proceedings and easily take the opener 6-2. Murray bounced back in the second and played far more solid. The one break of the set coming at the crucial time that allowed Murray to serve it out and level the match. The pair exchanged breaks to open the third set. Another break each came later in the set but Thiem pounced as Murray was serving to stay in the match, sealing his first win over the Brit and a place in the final.

A lengthy baseline rally went the way of Thiem, giving him the edge on the Murray serve. Thiem stayed aggressive on return and after another long rally and a great return, the Austrian earned a look at two break points. A poor drop shot from Murray handed Thiem the break to open the match. The Brit was yet to settle into the match as Thiem sailed through his first service game, with Murray only earning one point so far. Murray found his rhythm in the next game, as he came through a great hold to love to get himself on the scoreboard.

Outstanding defensive lobs from Murray helped him earn his first point on return, but it was the only one he was allowed as Thiem came through another easy hold. The Brit was still shaky on serve and another error-strewn game gave Thiem a double break lead at 4-1. The Austrian sent a backhand into the net, the first of three unforced errors in a row, on the way to giving Murray a look at three break points. The first was saved with a smash winner and the second with a great forehand putaway, but he handed the break to Murray on the third with a double fault.

Murray started off aggressive in his next service game, but as he moved into the net, Thiem pulled off two great passing shots in a row to go into the lead on return again. The Brit fought for a game point but Thiem pushed through to deuce, eventually earning back the double break with another error from Murray. The Austrian raced to 40-0 as he was serving for the opening set. A couple of errors from Thiem wasted the first two set points but he made the most of the third, striking a forehand winner to take the set 6-2.

Thiem struck a scorching backhand down the line followed by an inside-out forehand winner to push Murray to deuce in the opening game of the set. A great serve from the Brit gave him the advantage but it was quickly lost as Thiem chased down a drop shot and forced an error from Murray. A better drop shot from Murray gave him back the advantage. Thiem fired a forehand winner and Murray followed with an error to give the Austrian a break point. A good serve saved it and brought them back to deuce before Murray regained the advantage with an excellent volley. The Brit finally secured the hold to go into the lead for the first time in the match. The Austrian had a much easier time on serve as he flew through a love hold to put the pressure straight back on Murray.

The Brit came through a much better hold of serve but was unable to do anything on return as Thiem easily dictated on serve. His huge forehand allowing him to finish off points quickly as he leveled the pair at 2-2. The Brit was made to fight hard again on serve but came through the mini-battle to edge back in front. An outstanding service game from Thiem followed as he held to love with two stunning backhand winners in a row.

The Austrian took the first point on return in the next game with another uncharacteristic error from Murray. An error from Thiem leveled them before a stunning drop shot from Murray took him 30-15 ahead. Aggressive groundstrokes from the Austrian gave him the next two points and a look at a break point, but it was wasted with a bad forehand error sending the pair to deuce. A great serve from the Brit gave him the advantage and Murray came through another difficult battle on serve to lead 4-3.

A double fault from Thiem took Murray into the lead on return. The Brit earned his first break point of the set with a drop shot winner but the Austrian held his nerve and struck a great passing shot to bring them to deuce. A bad miss from Thiem at the end of an excellent baseline exchange gave Murray another break point, and another error from the Austrian allowed Murray the chance to serve for the set. The Brit stayed focused and served out the set 6-3 with no trouble to take the match to a decider.

A nightmare start to the set for Thiem gave Murray a look at three break points straight away. The Austrian saved the first but the world number one fired a forehand return winner to secure the break and the perfect start to the deciding set. Two passing shots from Thiem took him into the lead on return as he looked to get the break back. The longest rally of the match went the way of the Brit with an excellent drop shot to level the pair at 30-30. A huge forehand down the line gave Thiem a break point and a smash winner gave the Austrian the immediate break back. This time the world number nine was able to hold serve and edged in front at 2-1 with some great serving.

Another passing shot winner from the Austrian took him ahead on the Murray serve but a shanked return leveled the pair at 30-30. Some excellent defense finished off with a great forehand winner gave Thiem another break point but Murray pulled off an outstanding volley to take them to deuce. Another break point was quickly erased by Murray with a serve-volley. A backhand into the net from Thiem gave Murray a game point, taking it to level the pair at 2-2 after the intense mini-battle.

Thiem sailed through another service game before taking control on return in the next game, striking a perfect backhand down the line winner to bring up two break points. Murray gifted his opponent the break with a double fault, the Austrian taking a 4-2 lead. The lead didn't last long as another error-filled game from Thiem gave Murray the break back straight away. There were opportunities for Thiem on return in the following game as he pushed to 30-30 but he was unable to take advantage as Murray came through another tight service game to level the decider at 4-4.

Another scorching backhand from Thiem and a great drop shot from Murray helped the pair to 30-30 on the Austrian's serve. Thiem earned a game point with an error from Murray but the Brit pushed through to deuce with some aggressive play. Huge groundstrokes from Thiem gave him the crucial hold that would force Murray to serve to stay in the match. The world number nine earned a match point on return with a horrible forehand shank from the Brit. Thiem struck a lob over Murray who was waiting at the net and the world number one chased it down but was unable to return it, giving the Austrian the deciding set 6-4 and his first win over Murray.