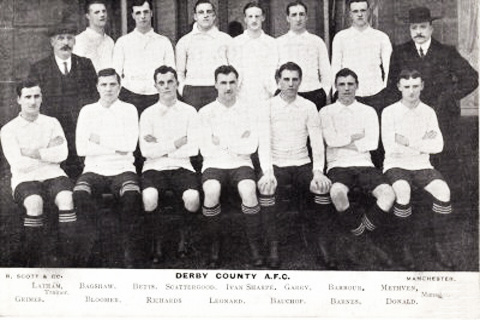 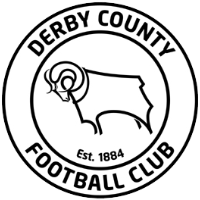 Derby County are a football club from Derby England, who currently compete in the Sky Bet Championship - the second tier of English football. They are managed by Philip Cocu and play their home games at Pride Park.

The Rams were founded in 1884 and first played their games at The Racecourse Ground. They originated as an offshoot from the Derbyshire County Cricket Club so people had something to be interested in during the winter months outside of the cricket season. Derby’s record goal scorer Steve Bloomer joined the club in 1892 and is widely regarded as the club’s best ever player having played 525 games for the club, scoring 332 goals.

Derby were one of many clubs who had to shut down after the outbreak of World War II but thanks to the persistence of Jack Nicholas and Jack Webb the club managed to carry on after the war, this was also aided by the signings of Raich Carter and Peter Doherty and the club won their first major trophy is 1946 winning the FA Cup final 4-1 against Charlton Athletic.

In 1967, Brian Clough and Peter Taylor took over at Derby and this began what would be the most successful era in the club’s history. Clough won promotion with the Rams to the top division in 1969, the side went on to finish fourth in 1970 in the top flight and the following year they managed to pick up their first top flight title. Clough left his position as manager after a falling out with the club’s board of directors but his successor, Dave Mackay, managed to guide the Rams to s a 2nd league title in the 1974/75 season.

After the success in the 70’s, the Rams went on to be relegated down to the Third Division and appointed Arthur Cox in 1984, and they found themselves back in the First Division for the 1987/88 season and backing from new owner Robert Maxwell allowed the club to bring in the likes of Peter Shilton, Ted McMinn and Dean Saunders. The lack of investment from that point meant the Rams would find themselves back in the second division by 1991.

Following the resignation of Arthur Cox and sacking of Roy McFarland, Jim Smith would take over the club in 1995, despite a slow start he would guide the Rams to second place and back into the Premier League, during the season it was also announced that the club would be moving to Pride Park Stadium after more than 100 years at The Baseball Ground.

The Rams recorded back to back top 10 finishes at the new stadium but then had three years of struggling as they eventually got relegated in 2002 under John Gregory and serious financial struggle hit the club.

Gregory was later sacked after misconduct and the club was put into receivership and sold for just £3 to a group led by Jeremy Keith. The club struggled in the 03/04 season under new manager George Burley but managed to make the play-offs the following season after finishing fourth but were beaten in the semi-finals by Preston North End.

In April 2006, a local consortium headed by Peter Gadsby bought the club and Billy Davies was appointed manager in June 2006. The Rams would go on to win the 2006/07 play-offs, beating West Brom in the final 1-0 thanks to a Stephen Pearson goal.

The club’s return to the Premier League would be a short one, Davies was sacked half way through the season and replaced by former Wigan manager Paul Jewell, as they came crashing back down with only 11 points.

In December 2008, Paul Jewell resigned from his post despite taking the Rams to a League Cup semi-final where they narrowly lost to Manchester United and he was replaced by Nigel Clough, son of former manager Brian Clough.

Clough had a good spell with Derby which lasted four and a half years until he was replaced by Steve McClaren. McClaren led the side to the play-off final in the 13/14 season but lost in the final to QPR as Bobby Zamora scored in the 90th minute.

McClaren left the club in June 2015 and this saw Derby have a total of six managers in just under two years until Gary Rowett was appointed in March 2017. Rowett managed to take Derby to what would be their third play-off campaign in the 17/18 season but the Rams fell short at the semi-final stage just like they had done two years earlier against Hull City.

Frank Lampard would take over from Gary Rowett in May 2018 and his Derby side went on to finish 6th as they secured their place on the final day with a win over Barnsley. Lampard and his side managed to overcome hot favourites Leeds United as they became the first team in history to overcome a 1st leg defeat at home to then qualify for the final. Aston Villa would be who they faced in the final and Derby would narrowly lose 2-1 after a goalkeeping error cost them the game.

Frank Lampard moved onto Chelsea in June 2019 and was replaced by Dutchman Philip Cocu who is still in charge at the club now.

Pride Park Stadium is located in Derby and has been The Rams' home since 1997 and has a capacity of 33,597. The stadium gets its name from the business park in which it is located as this area is also called Pride Park. The first-ever match to be played at Pride Park was a friendly on the 4th August 1997 against Italian side Sampdoria which the Rams lost 1-0, the attendance that day was 29,041 which was the highest attendance for a Derby County home game in 20 years.

The club's record attendance at Pride Park is 33,378 in a Premier League match against Liverpool on 18th March 2000, Liverpool ran out 4-0 winners with Emile Heskey scoring a hat-trick. Pride Park Stadium is an all-seated stadium but with it being one of the largest in the Sky Bet Championship, a lot of atmosphere is generated, particularly from the Rams' South Stand which has become known as a 'wall of sound' in the Football League.

Matt Clarke (on loan from Brighton)