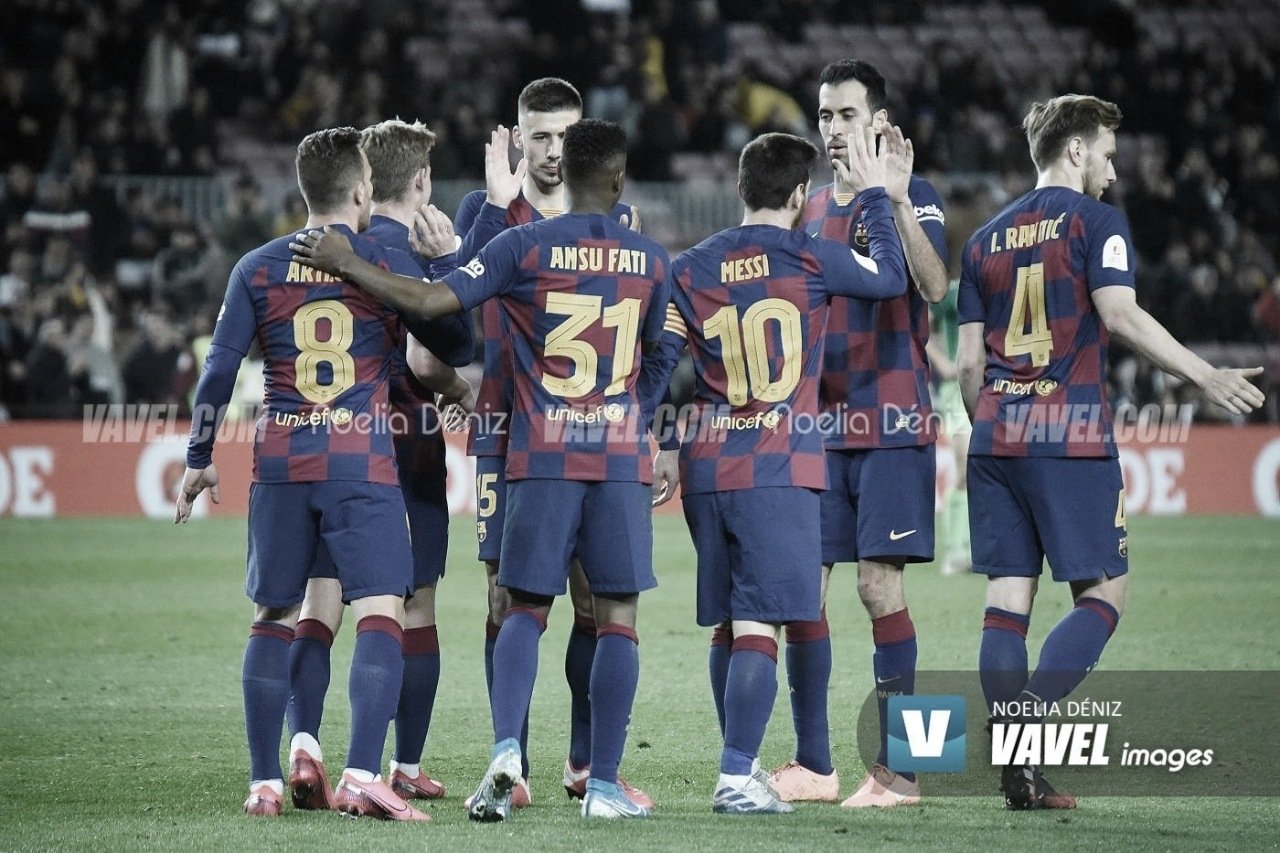 FC Barcelona is synonymous with soccer, and since its foundation in 1899, the Spanish club has not stopped growing institutionally and athletically, to become one of the most successful clubs in the current soccer scene. The azulgrana club tops the lists of the most influential teams in the world of sports, being one of the most recognized worldwide, for its trajectory and its values. In the ranks of Barça have played players who are considered legends of the sport, such as: Puyol, Beckembauer, Cruyff, Xavi, Iniesta, Maradona and an endless number of historic names that have made FC Barcelona a club recognized by all corners of the planet.

Hans Gamper, the driving force behind the dream

Hans Gamperwas the founder of FC Barcelona. The Swiss arrived in Barcelona in 1898 for professional reasons, but in his spare time he played soccer with his business partners, a game that was not very well known nationally at the time. Gamper was a great fan of this sport and played in the streets of the Catalan capital, which would soon discover how an unstoppable movement for the colors blue and purple would emerge. It was not until a year after his arrival in Barcelona when Gamper published an advertisement in the magazine "Los Deportes", calling for the founding of a soccer team in the city.

On November 29th of the same year, Hans Gamper met with eleven other men to form an association that would bear the name FC Barcelona and the city's coat of arms. The Swiss was the one who put the first grain of sand to constitute the values and the greatness of the azulgrana club, Gamper wanted an entity open to all, regardless of the origin of the people. he imagined an integrating club in which everyone could say his own, and bet on a democratic society, freely governed by its associates.

The 1990s was one of the best periods in the club's history. FC Barcelona, under Johan Cruyff, won a total of four consecutive league titles between 1991 and 1994. The club had exceptional players in its ranks such as Koeman, Guardiola, Laudrup, Bakero, Amor, Romário or Zubizarreta, who led the azulgrana club to the top. The culmination of a golden decade came in 1992, when the club won its first European Cup. At Wembley, FC Barcelona won its first major European championship against Sampdoria, with a magnificent free-kick goal by Koeman, which will go down in the club's history.

After the resounding success of winning the European Cup and four consecutive leagues, Barça became known as the "Dream Team", not only for the titles won but also for the game they played on the pitch. Johan Cruyff, from the bench, was the maximum exponent of the new philosophy of the culé team, with which they conquered Europe and the national championship on several occasions. The Dutchman created a style of play that FC Barcelona would identify with over the generations until the present day, winning a multitude of titles along the way.

After Cruyff's golden era, FC Barcelona underwent a series of changes in its institutions, going through two presidential mandates (Núñez and Gaspart) and ending with Joan Laporta as president. The azulgrana club was not going through its best moment and decided to make signings that would change the course of the Catalan team in the league championship and in Europe. In 2004, players of the stature of Ronaldinho, Ett'o, Márquez, Deco and Leo Messi made their debuts. The team got back on track as a result of the signings made and won the league in the 2004-2005 season and repeated the success in the 2006 season. That same year the team not only won the league championship, but also managed to win its second Uefa Champions League, in Saint-Dennis against Arsenal by 2-1. Ett'o and Belletti scored goals to turn Campbell's early goal around and give Frank Rijkaard's side their second UEFA Champions League crown.

This period is also remembered among FC Barcelona fans as that of Ronaldinho, a player who, during his time with the azulgrana team, amazed the fans with his magnificent way of understanding soccer. The Brazilian left recitals for history, such as the one he performed at the Santiago Bernabeu in 2005, scoring two goals and bringing the audience to their feet and giving him a standing ovation, seeing the insulting superiority he showed on the pitch.

The best period in the history of the azulgrana club was the one led by Josep Guardiola at the helm of the Catalan team, during 5 golden years. FC Barcelona became legendary after winning the first treble in the history of the club and Spain (League, Cup and Champions League) in the 2008-2009 season. The Uefa Champions League was won 2-0 against Manchester United in Rome, with goals from Samuel Ett'o and Leo Messi, the latter scoring a stratospheric header. In La Liga, Barça would become champions, leaving in the memory one of the best matches in the club's history, the 2-6 win over Real Madrid at the Bernabéu.

After the success of winning every possible competition in one season, Guardiola would continue to extend his legacy at Barça. At the start of the following 2009-2010 season, the azulgrana team won the Spanish Super Cup after beating Athletic Bilbao, won the European Super Cupagainst Shaktar Donetsk and conquered the Club World Cup against Estudiantes de la Plata. FC Barcelona definitely went down in the history of soccer and sport as the only team in the world capable of achieving such a feat, winning all the competitions it played in a calendar year.

FC Barcelona continued to add more titles to their trophy cabinet after starting the 2009-2010season in the best possible way. Pep Guardiola guided his players to their second consecutive league title, achieving a total of 99 points, a number that no team had ever achieved before. That same year, the Spanish national team won the World Cup against the Netherlands, with a goal by Iniesta in extra time. The national team was compared to Guardiola's Barça for the way it played and won the admiration of the soccer world for the good game it showed. The following 20010-2011 season brought great success, once again, for the team led by Pep and led by Leo Messi , who was breaking records and winning gold balls at the same time. FC Barcelona won La Liga for the third consecutive year and once again lifted the trophy, as on the first occasion, in the skies above Wembley, after defeating Manchester United 3-1.After winning the Spanish Super Cup, European Super Cup, Club World Cup and Copa del Rey in the 2011-12 season, the Guardiola era came to an end with fourteen titles won out of a possible eighteen, a period that many consider unrepeatable in elite soccer.

Luis Enrique was the coach who made it possible for FC Barcelona to return to dreaming of the coveted treble achieved, so far, only with Guardiola. The asturian coach entered the Barça bench without making much noise, and significantly expanded the record of the azulgrana team, becoming one of the most successful coaches in the club's history. Barcelona, with an immeasurable Leo Messi, won the League in a vibrant match against Atlético de Madrid at the Vicente Calderón, the Cup against Athletic de Bilbao and the Champions League against Juventus by 3-1. Barça thus achieved the second treble in its history and became the first team in the world to do it twice.

The following 15-16 season began with the azulgrana team winning the European Super Cup against Sevilla by 5-4, and ended with the achievement of the League and Cup, being the seventh domestic double that Barça achieved in its history. The last season of "Lucho" at the helm of FC Barcelona would bring one last historic event, the stunning comeback against PSG. The azulgrana team lost 4-0 at the Parc des Princes in the first leg of the Champions League round of 16 and managed to turn the tie around at the Camp Nou, with a goal by Sergi Roberto in extra time to make it 6-1 and advance to the next round. Luis Enrique would bid farewell to the azulgrana club by winning the cup against Alavés.

Barça has won a total of eight league titles since the 2008-2009 season, and only Atlético de Madrid and Real Madrid have been able to sporadically halt the Azulgrana's dominance in the league championship. With the arrival of Ernesto Valverde to the FC Barcelona ranks in 2017, the Catalan side once again became cup and league champions, surpassing the unbeaten record held by Real Sociedad (38) and leaving the new record at 43 matches.After a season marked by the double and a tough elimination in the Champions League against Roma, Barçareturned to the path of triumph and won the national championship again, although they could not repeat their luck in the final of the Copa del Rey, which was eventually won by Valencia. In that same 2018-2019 season, Leo Messi became the most successful player in the history of FC Barcelona, with 33 titles, surpassing Iniesta (32).

On January 13, 2020, Quique Setién was chosen to replace Valverde in the azulgrana dugout, the former Betis and Las Palmas coach signed with the azulgrana side until June 2022.