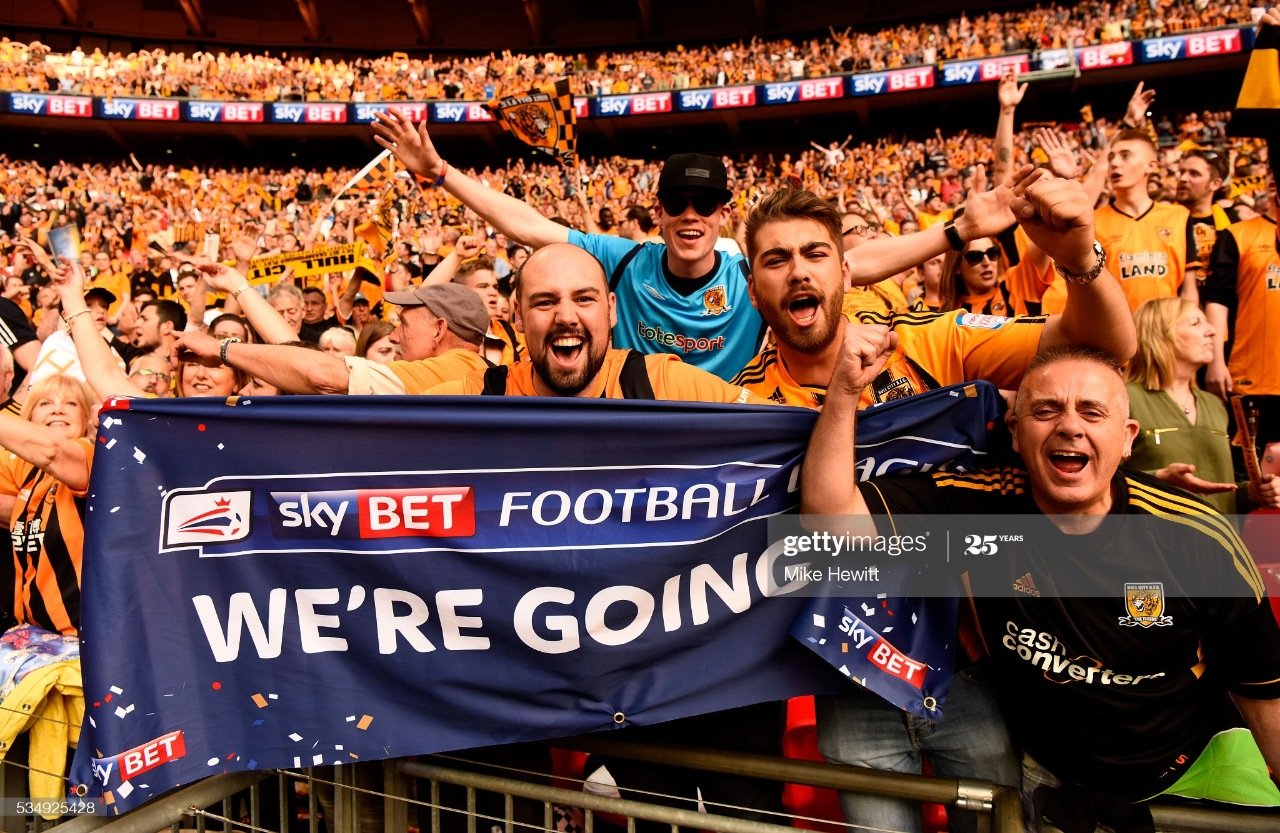 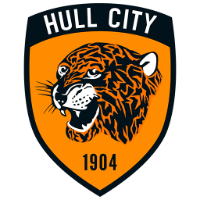 Hull City were founded in 1904, playing friendly games at The Boulevard (the home of the Hull Rugby League Club), Anlaby Road Cricket Ground and Dairycoates. A year later they were elected to the Second Division of the Football League. Whilst still playing occasional games at the rugby and cricket grounds, City also moved to a new home on Anlaby Road where it remained until 1941 when wartime games saw a brief return to The Boulevard.

When League football recommenced after the War in 1946, the Tigers faced it with a new Board of Directors led by Needler, a new manager, Major Frank Buckley, and equally as important a new ground, Boothferry Park, which had been built on the site of an old golf course.

Season 1947-48 started quietly but its importance lay not so much in the results, but rather in the arrival of one of the greatest players ever to wear the Tigers colours: Horatio Stratton Carter. Under Carter’s leadership, the Tigers had the best season in their history.

National headlines were made in 1963 when chairman Needler gave the club a cash injection of £200,000 worth of shares in his Hoveringham Gravel concern, and offered manager Britton a ten-year contract. Britton’s thorough rebuilding of the playing staff brought together the most free-scoring forward-line in the club’s history, including Ken Wagstaff, Chris Chilton, Ken Houghton and Ian Butler.

Into the 1980s and 1990s and there were massive periods of managerial upheaval at the club. They were promoted under Brian Horton, and when they moved into the 90’s they saved off relegation before seeing their most successful season in 1992-93. Top scorer Dean Windass proved instrumental in the Tigers’ successes and brought a steady stream of visiting scouts to Boothferry Park. Further progress was hindered by another bout of financial problems. In July 1997 the Needler family’s ownership of the club was at an end. David Lloyd, captain of the Great Britain Davis Cup tennis team and a multi-millionaire, was the new owner.

As Lloyd became even more unpopular than the previous regime, he sold the club in November 1998 to a consortium headed by Sheffield businessman Nick Buchanan. Although the direct link was severed with the rugby club, Lloyd retained ownership of Boothferry Park. With the team in bottom place in the bottom division, Warren Joyce was promoted from the playing ranks and, assisted by John McGovern, instigated a miraculous recovery that became tagged ‘The Great Escape’.

Lloyd sent in the bailiffs once more just days before the Tigers were due to entertain Leyton Orient at Boothferry Park and the club was placed into Administration just hours before the High Court hearing. A two-week adjournment was granted in order for administrators to find a potential buyer for the football club and their first job was to negotiate with Lloyd in order to re-open Boothferry Park.

Off the field, the Administrators received an initial 12 enquiries from potential purchasers of the club. They whittled these down to five firm offers and eventually recommended that one was suitable to secure the club’s future – provided that the club’s creditors and shareholders agreed to accept it.

Adam Pearson, former commercial director of Leeds United, called a press conference in March to announce that he was the new owner of Hull City. With Brian Little remaining in the manager’s hot-seat, a remarkable season ended with the Tigers reaching the Play-Offs for the first time. After the drama of the previous months, a 2-1 semi-final aggregate defeat by Leyton Orient was a comparatively minor setback.

Brian Little was replaced in April 2002 by Jan Molby. The former Liverpool star had established a promising managerial reputation at Kidderminster Harriers but struggled to halt the City slide despite another eight summer signings. The Molby reign ended in October 2002 and Peter Taylor then came in.

The Taylor Tigers also developed a more solid rearguard which was reflected in the consistency of a run of 16 unbeaten games from August to November. Another sequence of seven consecutive competitive wins in January and February (not achieved since the Carter days of 1948) confirmed their promotion credentials.

100 years after becoming members of the Football League, in 2005-06, Hull City were competing in the Championship – and the Tigers comfortably secured Championship status, eventually finishing in 18th place, ten points clear of the relegation zone. The highlight proved to be a 1-0 victory against Leeds United on April 1st, with the goal coming from Jon Parkin.

The search for a new manager was now on and Adam Pearson soon identified his number one target – Phil Parkinson. Parkinson had taken Colchester United to promotion just weeks earlier but it did not work out for him at City – he lost his job on December 4th. Phil Brown, who had joined the club as Parkinson’s assistant in October, was put in caretaker charge and victories against Cardiff, Burnley and Sheffield Wednesday saw him installed as manager until the end of the season.

His brief was to keep the Tigers in the Championship and he succeeded with some memorable results. Home wins against high-flying Birmingham City and Preston North End coupled with vital away victories at Luton Town and Cardiff City helped, as did the arrival of Dean Windass on loan. It was his strike at Cardiff which effectively saw off relegation and when Leeds went into administration just days later, safety was confirmed.

It was a summer of change at the KC Stadium as Adam Pearson sold the club to a consortium fronted by Paul Duffen, who became the new Chairman of Hull City. 12 months later, fans were planning trips to Manchester United, Arsenal and Chelsea after the best season in the Club’s history. A final day defeat at Ipswich put paid to hopes of going straight up and so City would meet Watford in the two-legged Play-Off semi-final. They disposed of them in style a stunning volley from Windass proved to be the difference between Hull City and Bristol City in the Play-Off final, leaving Tigers fans in ecstasy at the final whistle. Thousands of fans lined the streets of Hull to greet their heroes 48 hours later, while behind the scenes preparations for the Club’s first-ever season of top-flight football were well underway.

The season started in fine style as goals from Geovanni and Caleb Folan saw City come from a goal down to beat Fulham 2-1 at the KC Stadium. In fact, only a 5-0 drubbing at the hands of Wigan Athletic punctuated a great start as City recorded memorable wins against Newcastle, Arsenal, Tottenham Hotspur, West Ham United and West Bromwich Albion as well as draws with Blackburn Rovers and Everton in the opening weeks of the season. Things got tougher as the season went on and the Tigers were eventually sucked into a relegation battle. Despite briefly dropping into the bottom three towards the end of the season, City ultimately won their fight as West Brom, Middlesbrough and Newcastle were relegated to the Championship, the Tigers surviving on the final day of the campaign despite losing at home to Manchester United.

After a disappointing start to the 2009/10 season which saw City win just two of their opening nine league games, pressure began to mount and Chairman Duffen handed in his resignation. Speculation started about who his replacement would be and Adam Pearson emerged as the clear favourite to make a return to East Yorkshire after handing in his resignation at Derby County. On Monday 2nd November, Pearson was confirmed as City’s new Executive Chairman.

However, four consecutive defeats followed to send City sliding into the relegation zone and manager Brown was relieved of his duties and placed on gardening leave on March 15, leaving Brian Horton and Steve Parkin in temporary charge. Two days later, Iain Dowie was appointed as the Club’s Temporary Football Management Consultant. He brought with him Tim Flowers and Steve Wigley, meaning Brian Horton and Reserve Team Manager Aidan Davison left the Club. Parkin remained on the coaching staff.

The Tigers’ time in the Premier League came to an end with a 0-0 draw against Liverpool at the KC Stadium, a game which proved to be the last of Dowie’s brief spell as manager.

Nigel Pearson was appointed as the club’s new manager in late June and he took City to an 11th-place finish in his first season in charge, a season during which the future of the Club had once again been threatened by financial troubles. The Tigers were saved by the Allam family who stepped forward to become the new owners in December 2010. Pearson’s reign as manager ended in November 2011 when he returned to former club Leicester, leaving Nick Barmby to take temporary charge of first-team affairs. Just two days after the season had finished, Barmby was suspended and then sacked before Steve Bruce was confirmed as the club’s new manager in June 2012. Bruce made himself an instant hero as he guided the Tigers back into the Premier League in his first season in charge.

It was the start of a memorable and historic period for the Club as in the following campaign, Premier League survival was assured and a stunning FA Cup run saw the Tigers reach the final for the first time before eventually falling 3-2 to Arsenal after extra time at Wembley, but the backdrop of the fractious relationship the fans had with their owners started and still continues to this day, with the debate about the proposed ‘name change” and other issues still rumbling on.

The Tigers earned a first-ever shot at European football at the start of 2014/15 but after overcoming Slovakian side AS Trencin in their first qualifying round for the UEFA Europa League, Bruce’s men were eventually beaten by Belgian team KSC Lokeren as they failed to reach the group stages. That disappointment carried over into the league season as Premier League status was eventually surrendered on the final day of the campaign following a 0-0 draw with Manchester United.

2015/16 saw the Tigers bounce straight back to the Premier League in a promotion-winning campaign. Bruce’s side eventually had to settle for a play-off place and after seeing off Derby County in a two-legged semi-final, Mo Diame’s stunning strike sealed promotion with a 1-0 victory over Sheffield Wednesday in the Play-Off Final at Wembley.

That proved to be Bruce’s final competitive game in charge of the Club, the manager leaving the KCOM Stadium by mutual consent in late July 2016. Bruce’s assistant, Mike Phelan, was placed in temporary charge before being given the job full time, but a difficult run of results left his side in a relegation battle. Phelan was dismissed in early January 2017 and replaced by Portuguese Head Coach Marco Silva. However, the club were relegated back to the Championship on the penultimate weekend of the season. Silva left the club less than a week after the season had ended, subsequently taking over at Watford.

Leonid Slutsky came to the KCOM Stadium in June 2017. The former boss of the Russian national side was quick to make an impression as he integrated himself into the local community, but Slutsky departed in December and was replaced by former Scunthorpe United and Southampton manager Nigel Adkins. The improvement in results was steady rather than spectacular, but Championship status was eventually secured as Adkins’ men finished the campaign eight points clear of the bottom three, Jarrod Bowen leading the way with 15 goals in his first full season of senior action at the Club. Grant McCann is now the Hull City boss as the Tigers attempt to escape relegation from the Championship.